A graphic novel on Mies van der Rohe, the multiform artistic and family universe of the Giedions and the small stories for a reconciliation with nature by Angelo Renna are among this month’s selection. 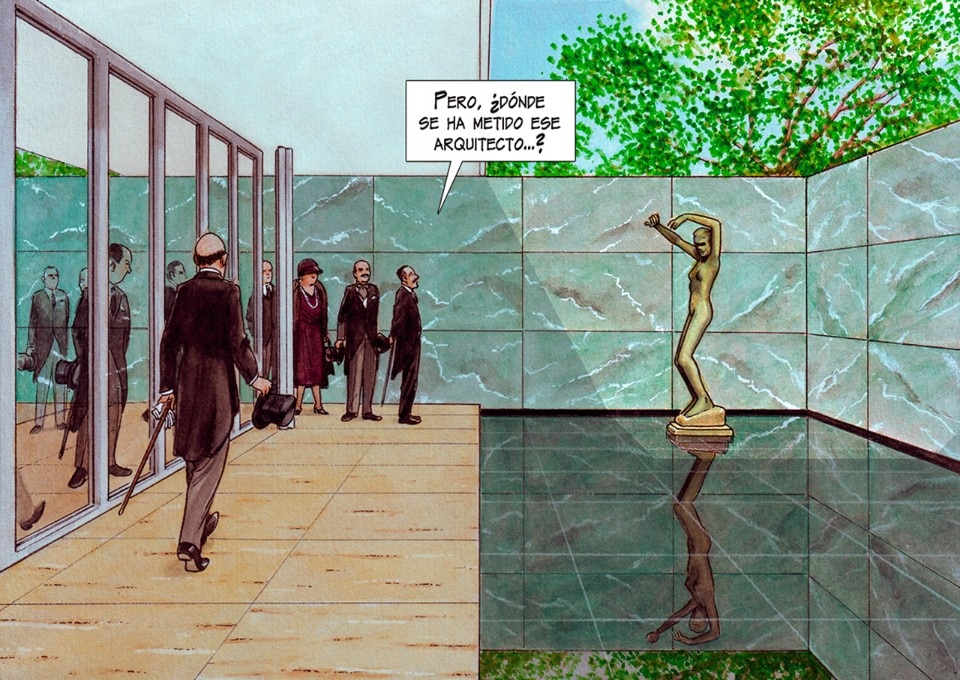 Fifty years after the death of Mies van der Rohe, ninety years after the creation of his famous German Pavilion for the International Expo in Barcelona and one hundred years after the founding of the Bauhaus, the graphic novel by Agustín Ferrer Casas, Mies, narrates and re-interprets the adventurous life of the father of modern architecture. While flying to West Berlin to take part in laying the first stone of the Neue Nationalgalerie, the Modern master takes stock of his life with his nephew, the architect Dirk Lohan: designs, clients, partners, rivals, friends and lovers combine with the ambition to build. But there’s also something Mies simply cannot forget and which up to then had been a secret. Even though fictional, the biopic comic-strip is the outcome of extended research and documentation and is accompanied by an excellent introduction, by Lord Norman Foster, and a text by the architecture critic for the Spanish daily El País, Anatxu Zabalbeascoa.

In order to write the imposing volume The Giedion World – 420 pages, almost 200 colour illustrations and 630 objects, documents and photos – the editor Almut Grunewald explored for the first time the archives of Sigfried and Carola Giedion-Welcker. By examining 16,000 letters, 10,000 prints and negatives, documents and a vast library, kept at the ETH in Zurich, at the James Joyce Foundation and at the Institute of Romance Studies, University of Zurich, the Swiss scholar offers a reassessment of the work of the most famous couple of art (Carola) and modern architecture (Sigfried) historians, shedding light on the significant and lasting impact of their research and theories.

Sigfried Giedion, and Carola Giedion-Welcker in the mountains, 1930s.

Sigfried Giedion, Constantin Brancusi and Marian Willard, probably in front of the stables of di Meudon, May 1930

Cover of the book

Sigfried Giedion, and Carola Giedion-Welcker in the mountains, 1930s.

Sigfried Giedion, Constantin Brancusi and Marian Willard, probably in front of the stables of di Meudon, May 1930

Cover of the book

The ABC’s of Triangle, Square, Circle

Published for the first time in 1991, The ABC’s of Triangle, Square, Circle is a collection of essays of the legendary Dessau school, which introduced psychoanalysis, geometry, infant education and popular culture into the standard political history of the Bauhaus. The book is edited by two young designers, critics and curators – Ellen Lupton and J. Abbott Miller – whose multidisciplinary approach has changed the field of writing and research on design.

Photographers Roberto Conte and Stefano Perego have accustomed us to a unique view of 20th-century architecture: from abandoned sites across Europe to Milan’s industrial ruins. For Soviet Asia they worked together, documenting modern architecture in the former Soviet republics of Kazakistan, Kirghizistan, Uzbekistan and Tagikistan, from the 1950s to the fall of the Soviet Union. An important endeavour that highlights many buildings that today face an uncertain future: museums, residential compounds and universities, often informed by the Persian and Islamic architecture of nearby Asia. Two essays by Alessandro De Magistris and Marco Buttino round off the publication.

If architecture was born in Antiquity to offer man shelter from nature – as Marc-Antoine Laugier wrote – today we have reached the exact opposite: the environment we live in is almost all man-made and artificial. So why not take a step back and consider the natural elements – rainwater, animals, plants and dirt – as design elements? It is the “monkey factor” suggested by Angelo Renna in his book that, by bringing us to the origins of humankind, could reconcile us with the natural world. In 145 pages, the Italian architect based in Amsterdam gathers a series of exciting and previously unpublished, scientific and utopian stories that suggest the new possible attitudes an architect may adopt to face the environmental crisis of our planet. The stories that unfold are set around the world and have very different protagonists: some bet on tradition, like Davay Gupta and Manu Bhatnagar of the Indian National Trust for Art and Cultural Heritage (INTACH) who study the history of India to exploit water on the subcontinent. But there are also stories of resistance, like the one with Mr Phiri, a farmer from Zimbabwe, who transformed a plot of dry land into a lush garden by designing a series of mini-infrastructures that collect rainwater. Plus, small utopias, like Professor Zhang Biqing who took six years to create an illegal rooftop garden on the 26th floor of a building in Beijing. Authorities smashed the dreams of this eccentric professor who however, in the meantime, attracted worldwide attention.