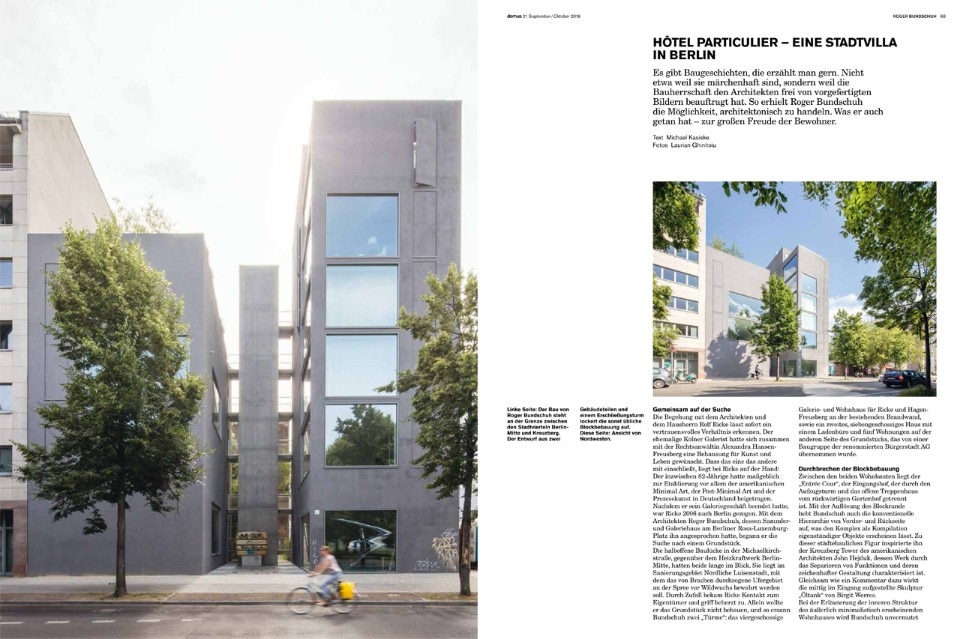 Share
How do we want to live? Some people pursue this question all their lives, others only in a certain phase of their lives, and for yet others it is part of their profession.

In this late-summer issue, German Domus takes a look at what must be the most luxurious form of living: a house of one’s own. Whether it is in the city or country, old or new, near or far, for summer holidays only or for the whole year – in this issue, readers can dream and take inspiration.

The design in Berlin by Roger Bundschuh, who has already built a house in Linienstrasse that is eye-catching by Berlin standards, breaks up the typical block perimeter of multi-family residential buildings into two sections and a staircase. One half is reserved for an art collector, while the other half accommodates several families. In a small community near Cologne, that was once characterised by farmhouses with barns and animal stalls, the architects Denzer & Poensgen resorted to the typology of the farmyard with buildings on three sides and lent it a more contemporary form: a closed stone wall screens off the house from the road and the public. Behind it are concealed three wings, grouped around a small courtyard.

With the Müllerhaus in Berlin, too, turning back to the past is the theme. The house in the back yard dates from 1844. It was the first to be built on the Prenzlauer Berg hill and is thus a protected monument. The Hamburg architects asdfg achieved the balancing act of nevertheless adapting it to modern-day aesthetic and functional requirements. For further out-of-the-ordinary solutions for a dwelling house, German Domus ranges far and wide. Casa Dalton by Alberto Morell lies on the Kenyan coast. An enormous flight of outdoor steps gives the house programmatic character: from the private apartments, these steps are ascended skywards for a broad view across the country. At the end of the steps is a breath-taking view of the sea. Pino Pizzigoni, for his part, in 1964 designed an artist’s holiday home in northern Italy that truly presses the interior outwards. This polygonal structure with its projections opens to the landscape, yet from outside appears as impregnable as a castle. A distinctive form of living was also developed by Robin Boyd in 1958: by spanning two pavilion-like parts of the building with one roof, he created a courtyard that is neither outdoors nor indoors.

In the state of Montana, USA a huge sculpture park has been created: for the Tippet Rise Art Center, the Ensamble Studio made several over-lifesize concrete figures that break through the landscape in a way that is unreal yet not alien. Then there is an article by our editorial brand director Paolo Tumminelli, in which he examines the Dyson phenomenon. In contrast to the practice of other companies, which follow a clearly perceptible line in design, at Dyson the thread is as invisible as air that is suddenly materialised. Our author Michael Erlhoff remarks on a further, largely social phenomenon. He has taken a detailed look at our increasingly close, even dependent relationship with smartphones and makes some fittingly pointed comments.