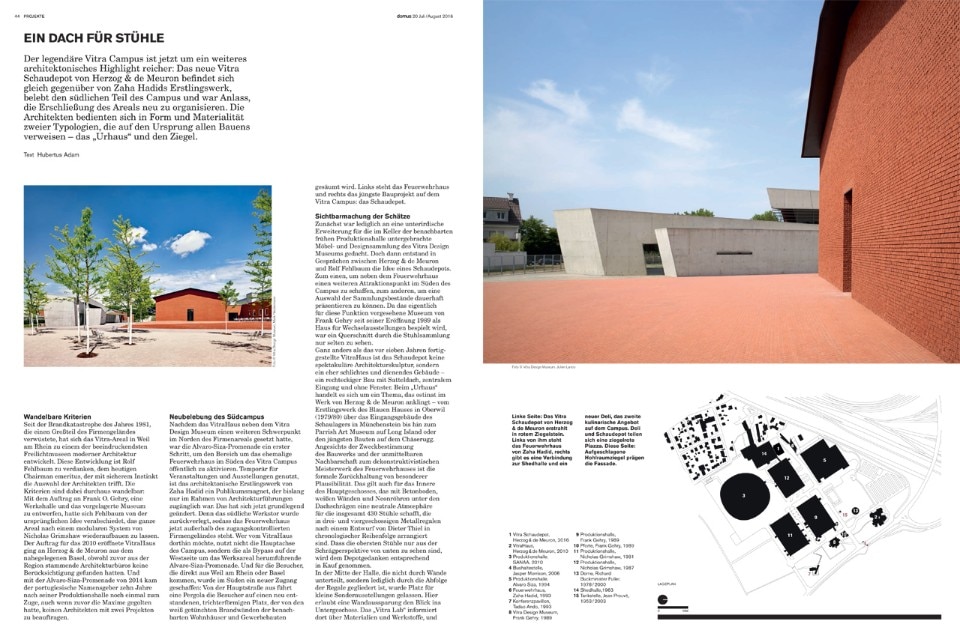 Share
“The common fired brick is one of humanity’s greatest inventions.” Thus Laurie Baker, an Indian architect, opens the foreword to his book “Brickwork”.

He links the brick to craftsmanship that produces a high degree of satisfaction: within a few minutes you can see the fruits of your own work. Baker regards the hand-made brick as a material with character and soul. Every brick is different. Like us humans.

In this issue of the German Domus we turn our attention to buildings that appreciate and exploit the value of brickwork. First and foremost the Swiss architects Herzog & de Meuron, who recently unveiled a building on the Vitra Campus that celebrates the brick. Four walls, no windows, a pitched roof and a facade that turns the brick inside out: the hollow bricks were broken open and laid with the broken edge on the outside. This produced a rough wall that promises to develop an interesting patina. The second new project by Herzog & de Meuron is in London. It is the extension to the Tate Modern – a polygonal structure that rises to the sky in the shape of a pyramid with a partially perforated brick facade that lets in the light day and night. Remaining in London, we also introduce new work by David Chipperfield and Jaccaud Zein Architects. Both are residential buildings – one on a larger scale and for high-end requirements, the other somewhat smaller and with a flexible, split-level living space. If you are interested not only in London’s new architecture but also in the training of architects there, read our article about Central Saint Martin’s College of Art and Design.

In the small Dutch town of Groningen, Domus has taken a look at a sports hall by Marlies Rohmer whose facade breaks away from a street-front prospect. Monumental waves of brick undulate upwards. At their crest, skylights admit daylight to the interior and artificial light to the street space. In Gdansk, by contrast, stands a building that at first glance is massive, almost like a castle, with a formal presence that is additionally emphasised by means of extra-dark brickwork. The architecture of the Shakespeare Theatre by Renato Rizzi, in turn, is extremely accessible and extends the urban space.

We also invite you to take a walk through Vienna with the architect András Pálffy, take you inside the exhibition “Subtle” curated by Kenya Hara, which presented imaginative work in paper by Japanese artists during the furniture fair in Milan, report euphorically on the porcelain collections of 2016/Arita, and draw a portrait of architecture with a human touch by Laurie Baker.
In this issue German Domus would also like to announce happy news: the design expert Paolo Tumminelli will enrich the work of Domus with immediate effect as our new official ambassador and editorial brand director. In a regular column he will comment on trends in the market and the trade, and will write lengthy features tracking down new developments.