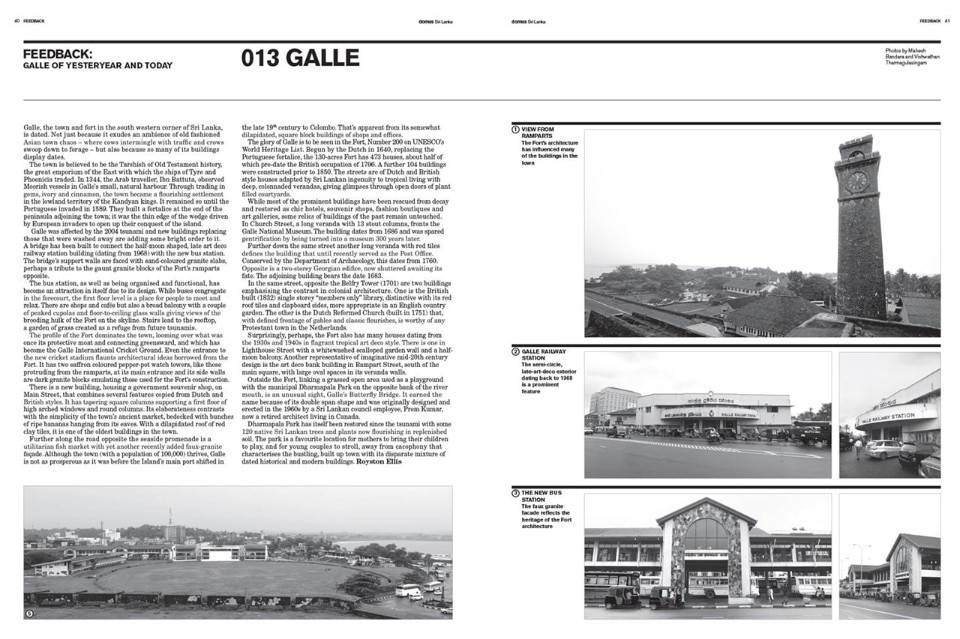 Share
This issue marks the advent of the second year of Domus Sri Lanka and revisits the subject of Colonial architecture and its preservation.

It seems befitting to do so as the topic often resurfaces in reference to architecture in Sri Lanka with more such buildings awaiting their fate. The local articles highlight the Colonial aspect of Sri Lankan architecture. “A journey of religious architecture” explores architect Sagara Jayasinghe’s personal quest to preserve heritage churches across Sri Lanka. His recording of these religious edifices, both remote and renowned, through measured drawings and historical accounts offers a means of understanding the church architecture as well as its origins. His research touches on how European or western concepts have merged with local traditions. The article in particular highlights a church in Lisbon Portugal built by the exiled Sri Lankan prince Dom Joao, 400 years ago and is the subject of his latest publication, The Black Prince’s Chapel. Through his work his ultimate goal is to preserve a religious architectural heritage for future generations; the Feedback article features the city of Galle bringing to light notable buildings – a mix of colonial buildings and modern additions, that give Galle its distinctive character. In particular is the Galle Fort along with the buildings within and the influence it extends to the buildings in the surroundings.

Among the selection of international articles are Identity Through Diversity by Diébédo Francis Kéré, a store within the Buckminster Fuller dome on the Vitra Campus where the identity of the existing icon is emphasised by creating a route that promotes exchange between the structure and the people; Architecture and Concept, an illustration of Bernard Schumi’s teaching method, during many years as a professor at Columbia University through four studio projects that show how architecture is the invention and materialisation of content; Terunobu Fujimori’s Building for an Art Gallery in Tokyo demonstrates the architects penchant for primitive construction techniques and material in the use of an unusual external cladding; Guido Canali and Prada illustrates the meeting of two forces that led to an innovative type of garden factory with admirable qualities; the Industrial Complex, Valvigna, Italy, the most recent and largest factory designed also by Guido Canali is diversified to be more than a mere manufacturing plant and aspires to create a place that represents the authentic spirit of the Italian brand; finally, touching on sustainability The Stones of Milan elucidates how ancient stones accumulated for years in open-sky storage yards, have been transformed into materials to repave squares.