To think that you could tell the full story of Gio Ponti would be like wanting to explain Italy to the world in a single book. 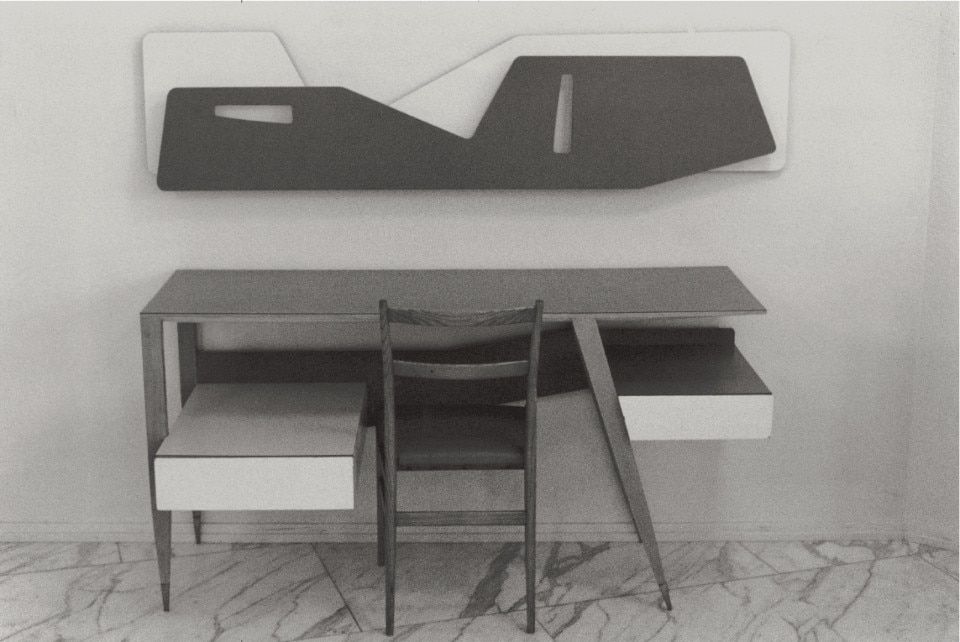 You would end up like a Borges character, drawing a gigantic, life-size map of the country, then having to add a planisphere of the Earth in order to illustrate the possible global extensions of the Mediterranean spirit that Ponti embodied so well. To describe, for example, the role he had in Italian design culture would mean successfully representing how Italy itself was handed over to successive gener- ations by a nascent middle class that lived a short period of “illumination”, that is to say a social caste that found in the disgrace and fortune of history the possibility of making the country evolve towards mod- ernity, only to precipitate rapidly into a state of guilty indolence right at the moment of assuming the responsi- bility to construct an authentically modern society. Certainly, it is much easier to find consolation (and a few facile biographers of the maestro have resorted to this) in the invention of post-modernity and how Italian society would be an early expression of this, as seen in Ponti’s work. As if he had not always attempted, until the last days of his life and through the pages of this magazine, to diffuse his idea of progression (not of progress) in architecture, art, industry, in the city and within the territory.

Yet even just concentrating on the idea of a modern Ponti would be an oversight, like trying to translate/belie the untranslatable, boundless material- isation of his thoughts. Because wanting to “psycho- analyse” Ponti signifies getting lost in a labyrinth of ideas, intuitions, professions, attitudes and aspirations. You inquire about the architect and you find the designer; you inquire about the designer and you find the painter; you inquire about the painter and you find the writer; you inquire about the writer and you find the mystic; you inquire about the mystic and you find the architect again... A virtuous circle without end, where it is impossible to distinguish between his roles, between the five, six, seven, nine, eleven Gio Pontis that cohabited in the same individual. But not like in the famous Jules Feiffer cartoon where different schizo- phrenic personalities are obscure enemies of one another. Rather, the many Gio Pontis were just as many cheerful men, each intently focused on his own work, but ready to exchange ideas, opinions and especially experiences with the others. This might be the secret, a possible logical explication of the indescribable, gigantic variety of projects, buildings, objects, initiatives, writings, exhibitions and collaborations that he prod- uced in almost 70 years of work. This is why the short essays and pictures that appear on these pages refer to just one part of the many lives of Gio Ponti, the one that is still present and contemporary as his concrete or intellectual heritage. It is our small attempt to contribute to the Borges-like life-size encyclopaedia that maybe one day will start to appear in the sky or in some other infinite extension of space, and actually resemble Ponti himself.

Entering the realm of Tom Sandberg’s photographic encounter with the Italian Culture Institute in Stockholm is a corporeal experience with skin and scent. Looking at the pictures, the dead-on presence of the architecture emerges through the ghostlike absence of the photograph with temporal displacements reminiscent of the human body’s beauty and decay.

Of course, the legendary building boasts its own slender staircases and voluminous curves. But the artistic summit between Gio Ponti’s architectural iconography and the indexical affinities of Sandberg’s photography creates multiple “double exposures” of time with ambiguous sensuous qualities.

Working exclusively in black and white, Tom Sandberg’s images reveal a subtle exploration of the language of photography.
P.S.1/MoMA in New York hosted the retrospective exhibition “Tom Sandberg: Photographs 1989-2006”, pronounced a major event by The New Yorker. Over the years his work has been included in a number
of exhibitions and collections in Europe and the US. Sandberg, who lives between Oslo, Paris and Berlin, conceives his photography mostly while travelling. His is the work of an artistic intuition perceiving the world while moving amidst it. Using the same type of film and developing liquid for the last 30 years, Sandberg’s method is reductive, incessantly enabling him to push the depths of his subject matter further.

The inherent qualities of black-and-white photography are explored in classical photogravure, palladium and silver gelatine prints, appearing on sheet aluminium, behind glass or on fabric.
Keenly attuned to the modulation of light and matter, Tom Sandberg’s photography offers complex surfaces that do not quite reveal themselves. Negotiating between resistance and directness, the grammar of his visuality approaches the imperceptible.
However, there is always a translucent psychology and dark sensibility lurking behind. Captured in poetic form, the images’ aura of immateriality releases the contemplative. And yet, as in Sandberg’s serial exploration of Gio Ponti’s “journey to Sweden”, there is also a story to tell. The Stockholm series is the narrative of one artist addressing the work of another, trying to transform the building’s layers of emotional and intellectual insights.
Sandberg says the Italian Culture Institute has its feet on the ground, a feature which for him signifies the best of architectural gems. In the grey mist of the Scandinavian winter, offering the practical joke of almost no daylight, the photographer’s phenomenological approach is a respectful trespassing of the three-dimensional property of the architecture itself.

An image of a set of furniture draws attention not only to the struggles of the shimmering greys, but also to the intruding piece of curtain in perfect peace with the incongruence of the work. There is something in the discontinuous designs of the institute and the reluctance of the images that both complement and intrigue each other’s elements.

Rich and sparse, a fragmented more than sequential dialogue between the silver chemistry of the black- and-white imagery and the concrete tissues of the construction radiates. Wandering in the overly pastoral surroundings, there is a glimpse of the human presence for whom the languages of both art and architecture exist. It is not only the literary breath of the photographic series that recalls a passage from Thomas Mann’s novel The Magical Mountain seen from the sanatorium in the Swiss Alps: “Time has no divisions to mark its passage, there is never a thunderstorm or blare of trumpets to announce the beginning of a new month or year.

Even when a new century begins it is only we mortals who ring bells and fire off pistols.” The quiet event of this rendezvous between photography and architecture, however, taps into the unpronounceable nature of time.

Torunn Liven
She is an arts writer and art historian from the University of Oslo and Humboldt University, Berlin.

Who is Tom Sandberg

Born in 1953 in Narvik, Norway, Sandberg lives and works in Oslo. For almost 30 years he has worked exclusively with large format b/w film. He has been included in numerous exhibitionsincludingtheP.S.1MoMA, New York; Museu Calouste Gulbenkian, Lisbon; The Walker Art Center, Minneapolis; International Center of Photography, New York; Moderna Museet, Stockholm; Centre Georges Pompidou, Paris; and the Museum of Contemporary Art, Chicago. Sandberg’s work is included in the permanent collections of the National Museum of Contemporary Art, Oslo; Museum für Kunst und Gewerbe, Hamburg; Moderna Museet, Stockholm. He is author, with Stefano Casciani, of the photographic book Design in Italia: the making of an industry, 2008.