A stroll around the home of… Leo Lionni, an art director in rural Connecticut

Our third appointment in the homes of the designers from the Domus Archive takes place at Leo Lionni’s, a Dutch artist who lives between Italy and America and owns a home-studio guarded by a horseman. 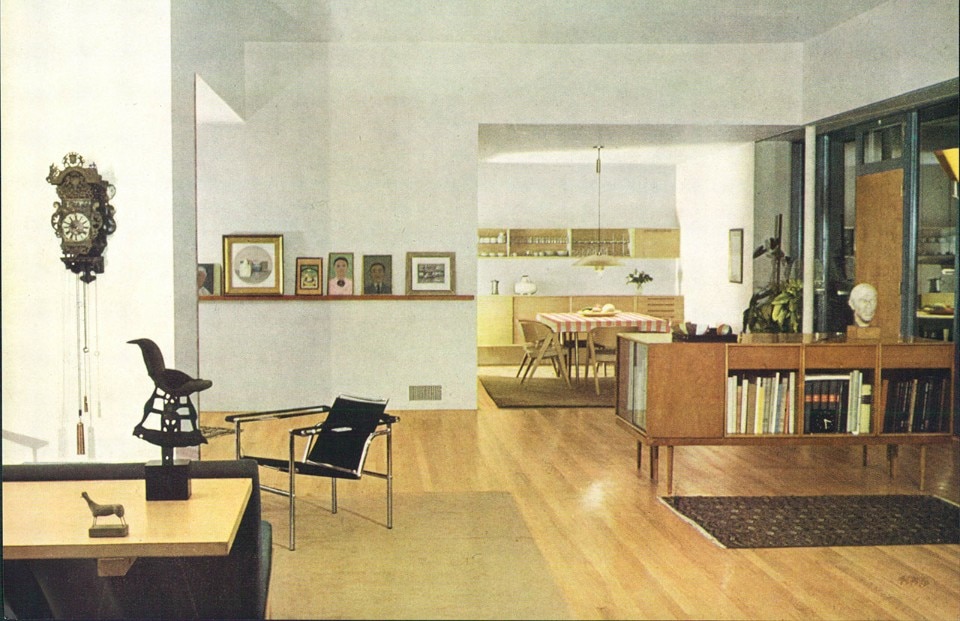 “European spirit, American house” was the title of the article that introduced the readers of Domus to the house of Leo Lionni, a Dutch “designer, graphic artist, writer, art critic” whose brilliant career path, which he built between Europe and United States, was deeply appreciated by the magazine (Domus 299, October 1954). Lionni was born in the Netherlands but studied in Italy in the ‘30s, and then fled to the United States after the promulgation of the Italian racial laws. Here, he refined his skills by working as an advertising graphic designer, a cartoonist for the New Yorker and an art director of Fortune Magazine, the New Yorker monthly magazine with beautiful covers designed by modern artists. In January 1954, Lionni celebrated Italian art in the Fortune magazine with a report entitled "The energies of Italy", on which Enrichetta Richter, editor of Domus, also worked: ten pages illustrated by painters such as Carlo Levi, Giacomo Manzù, Renato Birolli, Salvatore Fiume and Massimo Campigli.

In October 1954, Domus visited Leo Lionni’s house in Greenwich, Connecticut: an old and typical country house with a pitched roof, which he had built together with Giorgio Cavaglieri, an Italian painter and architect who had also fled to the USA because of the Italian racial laws. The photographs of the house chosen by the editorial staff were taken by Ezra Stoller, a great American architectural photographer, and Lionni himself.

The horseman sculpture by Marino Marini in the garden. From Domus 299, October 1954. Photo Leo Lionni

A Fortune magazine cover, whom Leo Lionni was art director

The house looks simple and classic, "Beautiful in the simplicity of the facade, and its exterior does not reveal the modernity of the interior, except for the wooden front porch pergola embellished by a thin trellis, and the broad living room window". As soon as we put our foot on the front lawn, we understand that the owner has great taste: we are greeted by a horseman sculpture by Marino Marini (that's the same horseman guarding the entrance of Peggy Guggenheim Venetian palazzo). Once you cross the threshold, you enter Leo Lionni's world, and you can sense his international nature, and  his love for art and for the artists. "A modernity that consists," we read on Domus, "more than in the distribution of space and furniture, in the presence of works of art that serve as pieces of furniture. They represent the world in which he lives, and which allows him to live".

A modernity that consists more than in the distribution of space and furniture, in the presence of works of art that serve as pieces of furniture. They represent the world in which he lives, and which allows him to live

The living room is a large room with plenty of light, with white walls, wax polished parquet and a few big plants. Some antique pieces, such as "a 15th century statue from Burgundy" and a 17th century Dutch pendulum clock, coexist with Le Corbusier's black leather and steel armchairs and some Eames and Saarinen pieces of furniture, on which two iron sculptures and a carved head by Marino Marini are displayed. Lionni has surrounded himself with works of art, mainly from Europe and Italy, which he prefers not to hang but to place on a wooden shelf on the wall, like a still life with bottles by Giorgio Morandi and a drawing by Henry Moore. In the living room, there are works of art, a low table and many books to read near the fireplace, which has a large metal hood and is protected by a mesh curtain. Walnut cladding is the main characteristic of the dining room – which has sideboards full of white crockery - and the passageways that lead to the study and the bedroom.

Read also: A stroll around the home of… Eszter Haraszty, a colourist in New York

Upstairs, Lionni works, reads and paints in front of the natural light that enters through the windowed wall, and is amplified by the white walls and ceiling with painted stripes. Next to the window, there is a sofa with a lamp that the artist switches on when he wants to read, and a record player. The recessed bookcase is made of movable metal shelves, and it contains books - there is a catalogue by Goya - and magazines, as a testimony of his passion, which is also his profession; in the lower part of the bookcase, Lionni puts his brushes and colours, which he hides behind a straw curtain: "a roll-up curtain covers the artist’s painting tools". The workstation is a desk with a Eames chair, jars filled with pencils and a metal archive cabinet. Leaning on the wall, there are stacks of paintings and, hanging on nails, rulers and scissors for creating collages.

In the ‘60s, after many successful professional experiences (Olivetti wanted him to help setting up of the showroom in Chicago and San Francisco) Leo Lionni returned to Italy, in Liguria and then in Tuscany, to devote himself to painting, sculpture, engraving and delve into the social role of the artist in the community. Lionni is famous for being the creator of illustrated masterpieces for children which has started with collages, such as Little Blue and Little Giallo (1959), and symbolic characters such as Swimmy the fish (1963), Cornelius the Crocodile (1983) or Frederick the mouse (1967), now more relevant than ever: unlike his colleagues, who collect food to face the winter, Frederick collects the sun, colours and words, food for the mind to distribute to the community in the darkness of hibernation... a wise prophet?