Massimo Vignelli and Domus, the history of an insatiable designer

Massimo Vignelli was an innovative designer and a meticulous graphic designer from the very beginning. By recounting his many projects, Domus retraces the steps of his long career in Italy and in the USA. 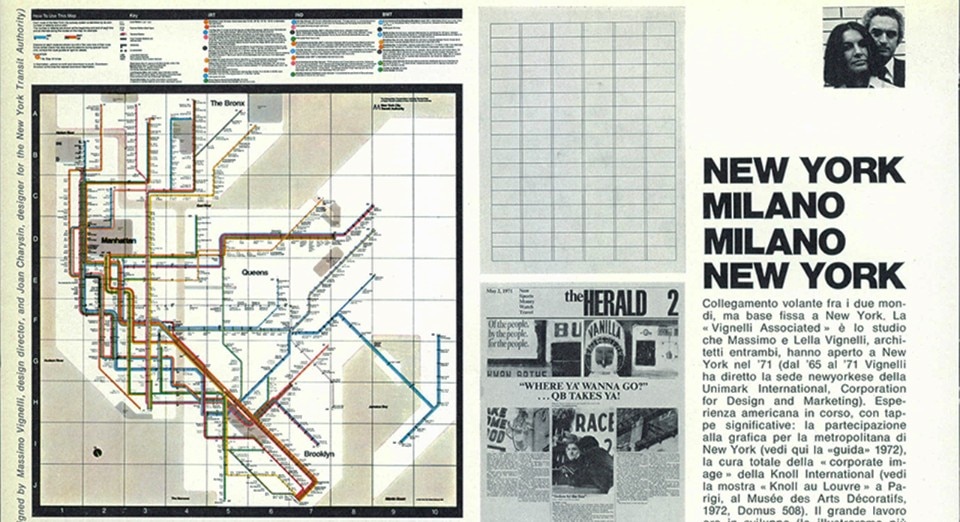 Domus talked about architect Massimo Vignelli for the very first time in 1952, when he designed the interiors of a record store where you could also attend “music conferences” in the evening. It had a few versatile pieces of furniture and listening booths with a dim lighting, “like the stage of a theatre”. The project was already characterized by simple and flexible shapes, the distinctive traits of Vignelli’s style (Domus 273, August 1952).

In 1960 Massimo and his wife Lella (architect Elena Valle), founded the Vignelli Office for Design and Architecture in Milan. Its multidisciplinary design approach saw classical forms as the starting point for creating timeless objects and installations. During these first years of activity, Massimo Vignelli collaborated with the Venini glass company in Murano. Domus presented a collection of innovative glass and silver vases with simple shapes: "the combination of materials usually employed in different techniques leads to the creation of new forms, [...] forms that belong to this time, but also seem to come from a distant past" (Domus 404, July 1963).

The 1970s were the golden age of the Vignellis: the architects designed the Knoll International exhibition at the Museum of Decorative Arts in Paris. Knoll International was a company very close to Massimo’s heart, since he had been working on their corporate identity since 1966. The article "KNOLL AU MUSEE" opened with a full-page picture by Jean-Edgar de Trentinian: the few lines about the exhibition focused on the lightweight exhibition solutions, made of "large transparent methacrylic containers, that could be easily moved thanks to their wheels". (Domus 508, March 1972).

"New York - Milan Milan - New York: a flying link between the two worlds but headquartered in New York" is the name of the 1973 article that summed up the American activity of Massimo and Lella Vignelli, who had opened their new Vignelli Associates studio in New York. Here, they marked their most significant milestones: they designed the New York subway map (they employed the Helvetica font, whose immediacy was revolutionary), the interior design concept for the Artemide showroom in New York and the clean and clear layout of The Herald, which allowed a greater readability of the news, and prevented ads from disturbing the reader - a great innovation in the American press (Domus 524, July 1973).

Read the bio of Massimo Vignelli on Domus

In 1978, Vignelli Associates also designed the interior of St. Peter’s Lutheran Church of the Criptor center, a religious building that also hosts shows and concerts. Its minimal and versatile interior can adapt to different situations: "the platforms, altars and benches are extendable. The wooden steps can also serve as seats that can fold away when not needed. The natural materials give a unified sense to the environment, which is devoid of any superstructure or superfluous objects" (Domus 584, July 1978).

Under the direction of Alessandro Mendini in 1981, Domus talked again about Massimo and Lella Vignelli. The article by Gillo Dorfles was written on the occasion of the exhibition dedicated to their twenty years of activity at the PAC in Milan. Dorfles praises their American projects, which were carried out "in a very convincing way by the Vignelli studio”. Dorfles continued, saying that "they have been able to bring to New York that rigorous and never messy fantasy that strangers so often envy us [...], they have manager to overcome the conformism of graphic functionalism and - while maintaining their compositional agility and their graphic recklessness - they were able to put a limit it, and combine it with the harsh reality of the United States, without however reducing their imagination and creativity"(Domus 615, 1981).

A few years later, Domus focused on the Vignelli Associates studio in New York: 1,500 square meters in a former goldsmith's workshop, a 14-storey white building on 10th Avenue, the same building where Richard Meier, Charles Gwaathemey and Robert Siegels were working. White is the main colour, and the whole city can be seen from the fifty windows of the office: "from the countless workstations of the office, you can see the river flowing from the Statue of Liberty to the Washington Bridge. The individual workstations allow a full view of the river when standing" (Domus 677, November 1986). Michael Bierut, a former associate of Vignelli Associates, remembers the years spent in that studio: "together with his wife Lella [...] and a surprisingly small, ever-changing group of designers, Massimo was able to create projects that would put bigger studios to shame. Always optimistic, never cynical, he had an insatiable appetite for new design challenges, and faced every one of them as if he had never done anything like that before". (Domus 835, March 2001).

Vignelli is often featured on Domus. Aldo Colonnetti, in 1989, commented on the effectiveness of the new graphic design of TG2 and the RAI television studios, which showed "the maniacal attention to the public", and in 1992 the director Magnago Lampugnani let him design the cover of the May issue - he painted it all pastel red (Domus 738, May 2992). When Nicola Di Battista was the director of Domus, the Vignellis retraced the 50 years spent in New York - "a city proud of its youth, aware of its future, fascinated by its own identity, a city with no end". (Domus 972, 2013)

A few days before passing away, in May 2014, Massimo Vignelli asked Domus to publish a tender tribute to his wife and work partner Lella, which also offered further insights on the role that women architects and designers have played for their companions, and for which they have never received enough attention (Domus 980, May 2014).

Aldo Colonnetti's words effectively describe the relevance of the Studio's work: "there is always an ethical instance in Vignelli's approach: [...] the user feels the protagonist in these mental and physical spaces, it's almost impossible to sense the designer's presence. Vignelli's style is easily recognized because of the ability to make the contents speak", concludes Colonnetti, "The design approach of the studio is extremely modern: and this is its strength and its fundamental quality". (Domus 722, December 1990).