From the archive. Interview with Cody R. Wilson, the designer of the first 3d printed pistol

In the United States, a judge has stopped the online publication of a printable 3D gun’s blueprints. From Domus archives we republish the interview with the political activist who invented it. 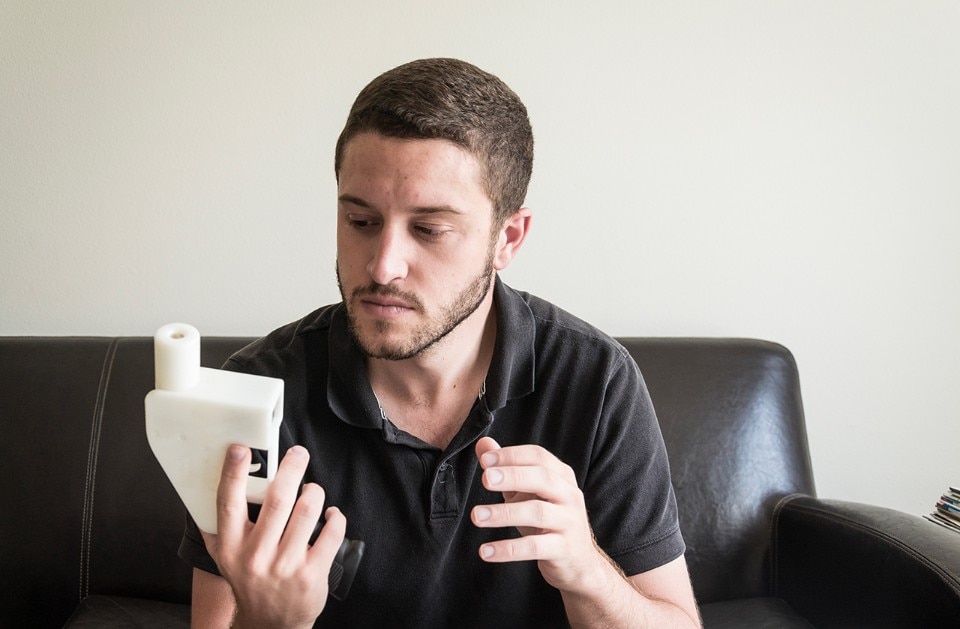 In Washington state, a federal judge has prohibited the online publication of a printable 3D gun’s blueprints. Last June, a nonprofit organisation in Texas called Defense Distributed won a lawsuit against the US government for the distribution of firearm printing files, but nine federal states opposed to it, obtaining the revocation of the provision, which it would have entered in charge on 1 August. In the United States the debate about freedom of arms use and movement is so reignited, with Senator Ed Markey saying that “3d printed plastic firearms are the ultimate gun loophole”.

Exactly 5 years ago, an interview with Cody R. Wilson was published in Domus 971, a law student then twenty-five years old, designer of the first gun made entirely with a 3D printer. In the article we talk about 3D printing – a technology almost unknown at that time –, Wilson’s political background and the innovations that technology brings within the cultural debates. Republishing a broad excerpt of this interview, we note that those that were considered avant-garde technologies only 5 years ago are today within everyone’s reach and their liberating drive has been quickly put to profit or reused in a reactionary manner. Has technology really democratised innovation?

Joseph Grima: First of all, I’d like to frame this as a discussion about design. When you began, you were simply replicating gun components with a 3d printer. With the Liberator project you took it a step further. You decided to design something that previously did not exist.
Cody Wilson: It’s good the conversation is coming back to that, because immediately on the heels of the announcement that a 3d-printed gun exists, the entire conversation stopped at the politics of the project. No one is able to take in the fact that a 3d-printed gun exists, and that there could be 3d-printed springs and barrels.

JG:  How did you end up designing a gun that could be entirely printed with a 3d printer? What were the challenges?
CW:  The biggest initial challenges were yields in the materials, because standard commercial handgun cartridges have relatively high chamber pressures. Secondly, it involved questioning the orthodoxies of the establishment in both the rearms and the 3d-printing communities. The standard reaction was, “Oh, you’ll never be able to do it!” I would go to an external ballistics guy, someone who could help me with instrumentation, and I’d say, “Look, I’m interested in doing this, and I’m having this problem—maybe I should add some plastic or something?” And they’d say, “What are you talking about? This is crazy!” I’d be saying, “Hey, sell me your kit, man!” Then, people would consider whether they wanted to make the sale. So to even get that far, I really had to overcome people’s own senses of the impossibility of this project.

The biggest challenge was people’s assumptions about gun design: the idea that most people wouldn’t overcome was that you could print a gun barrel or springs in plastic. People just wouldn’t come around. They’d keep saying, “You’re always going to have to do the barrel and springs in steel or metal! That’s just obvious.”(…) Technology was actually a bit ahead of where we thought it was, and less expertise was needed, too. The first time we fired a barrel with a .380 and it worked, I was shocked. We have it on video. And then we fired a bullet again, and it worked. And we kept ring bullets. The barrel wouldn’t break! It broke at 11 rounds. That day I knew this was going to be done, easily. It’s going to be out not next year, but this year.

JG What makes you so certain that designing a way for people to make their own guns more easily is good?
CW Because it confronts everybody with their own unseen hypocrisies. It’s not about guns; it’s about information. One guy said to me, “Look, they’re making me choose between a world with guns or a world with controlled Internet, and I choose free Internet, therefore I choose guns.” What are the logical consequences of your position? You’re not going to be able to regulate it. It’s o the table. You can print a gun, these dumb objects with their dumb, brute, easy physicality—you’ll always be able to. All I did was force the issue in the most visible way possible. It’s 20th-century institutions versus 21st-century implications. People are beginning to see that. I receive a lot of emails saying, “My thinking about guns informed how I viewed this project for months, and now I get it: it’s about information.”

JG You’re a self-declared libertarian and individualist anarchist. What came first, your libertarian ideals or your first gun?
CW My crooked path to grand libertarianism came first. That’s who I am. I was just foolish enough to think that I could actually execute one of these strategies. That’s one thing that makes some gasp, “Oh, he’s not just talking! The bastard intends to do something!” All through college I was radicalised. I read Hans-Hermann Hoppe and Bastiat. If you spend any amount of time reading the Austrian School you end up at anarchic positions. This battle is going to be about control versus liberty— the grand, centralising, totalising state versus dispersion and distributed power. When I thought about what a gun meant, I decided that was a story I could tell. [...]

JG The kind of technology that you have in your tiny factory space gives you the power to manufacture something that 20 years ago would have been impossible with such ease. We’re at a turning point in history in which design is playing a central role: technology has democratised innovation.
CW I see this as the fundamental logic of the whole Internet. The fact is that in your dorm room you can start an empire. You can do that! There’s still some kind of free space on the Internet that allows you to scale up very fast, and quickly start biting at the ankles of these established players. There’s something about the digital moment, the Internet moment, that lets people jump in the fight incredibly quickly. We’re kind of entrepreneurial with DD (Defense Distributed), but it’s not a profit- seeking or profit-making company. I’m creating something that’s like, forgive me the analogy, a “public good”, in the sense that it can be used by many other people. In our case we’re not interested in finding a way to monetise. At least that’s the way we’re doing it. It’s been painted as an attack on the gun industry, but I’m not really sure it is.

JG It seems like Moore’s law doesn’t apply only to processors now, but pretty much everything in everyday life. There is exponentially rapid change in social evolution. Technology seems to be changing everything. What do you see if you project yourself 20 years into the future?
CW There are huge developments in materials just around the corner. (And man, I’m behind in my materials reading. I was doing a lot from October to December, then I got distracted by all the media uproar.) I’m seeing extraordinary things in enamels; I’m seeing rapid advancements in open-source ceramics; it looks like SLS (selective laser sintering) might end up being the technology that many people in retail 3d printing go for. You’re going to get quality build parts and nice epoxy materials. I’ve already seen epoxy barrels on the Internet! Increasingly, people are going to be creating complex objects that can integrate circuitry and other kinds of features. If it can be more complex and a 3d printer can make it, 3d printing is going to be what everyone is saying. The future is going to be micro-machining; durable, versatile materials; rapid, distributed customisation. Plastic processors are going to get freaked out because no one will be buying their injected-moulded baubles anymore. But at the same time, it’s probably all just a compliment to traditional industry. So, I see the apocalypse, and then I don’t. But I don’t really believe in an end of history. What can I say? It’s the world itself that resists. It’s a total system. It just does.