Samsung’s overtaking of Apple — in its smartphone and tablet sales — relaunches a debate involving the whole industrial design world. Justin McGuirk talked about the issue with the Korean giant’s design chief when they met at the Milan Furniture Fair. 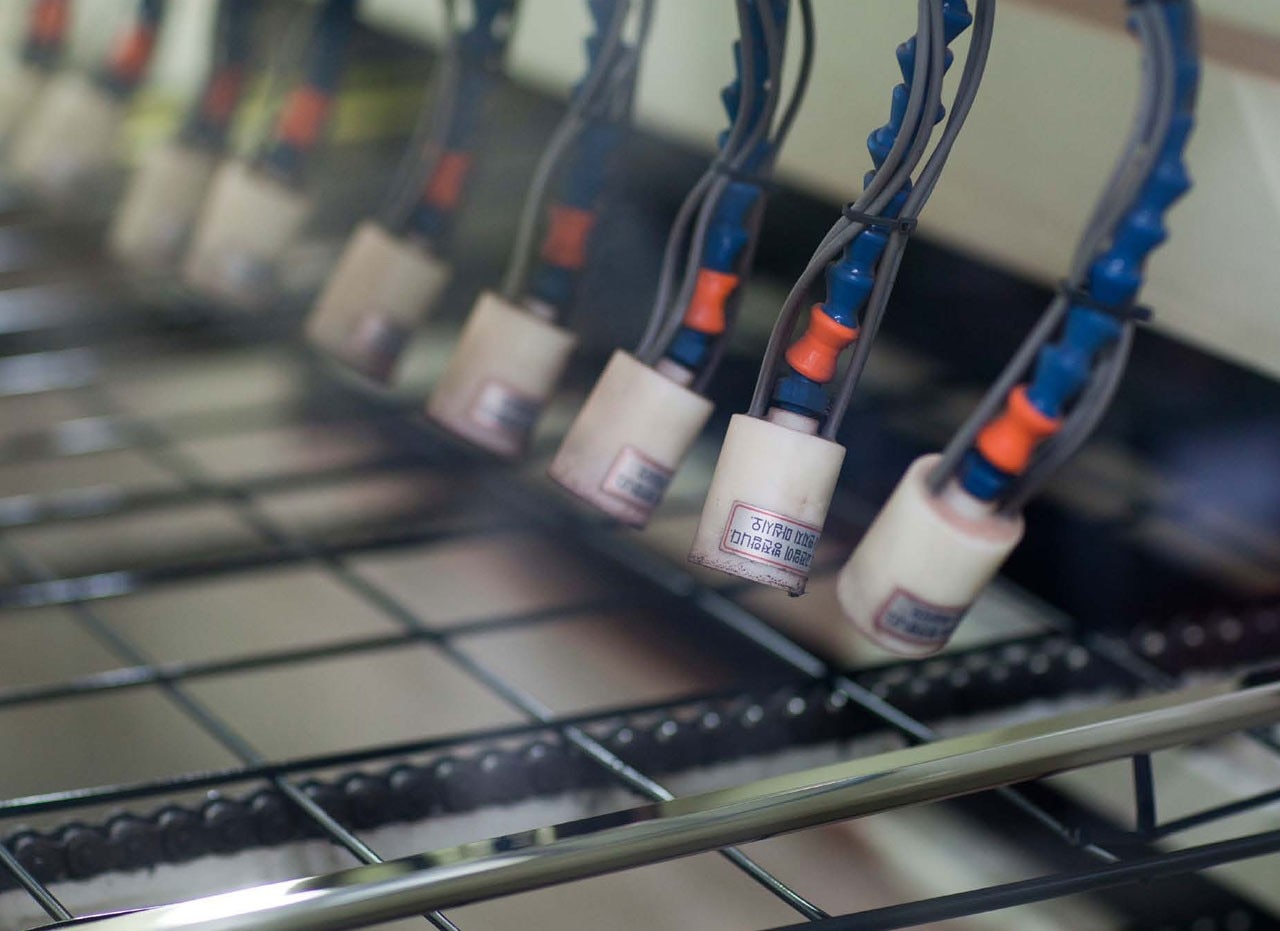 This article was originally published in Domus 969/ May 2013

At the Consumer Electronics Show in Las Vegas earlier this year, Samsung unveiled the F8000, a “smart” TV on which you can use the Internet and social media, and that you can control by voice or gesture. On one level it was just another soon-to-be-obsolete product with a vaguely futuristic millennial number attached. But the tech press was quick to point out that Samsung had beaten Apple to the highly anticipated Internet TV market. The so-called follower, the media jibed, had become the innovator.

Moreover, last year Samsung overtook Apple as the global leader in smartphone and tablet sales, its Galaxy SIII smartphone selling more than 30 million units. Add this to the fact that the media is increasingly looking to Samsung to take the lead in consumer electronics innovation, and the South Korean company’s fortunes appear to be at a tipping point. The question is, who cares? Why is this rivalry between two tech giants of any interest to a design magazine?

The answer, rather obviously, is that Apple became what was until recently the world’s largest company by selling “design”. The sheer force of aesthetic desirability combined with an effortless user experience was contagious enough to make businesses the world over, even those not selling products, aware of design’s transformative potential. Samsung, on the other hand, is most often discussed in terms of its technology and its market penetration but rarely its design. So if Apple is superseded by a company that is not particularly feted for its design, then, after all this hype, perhaps design is not quite as important as we thought. But then, is Samsung really the ersatz Apple that it is sometimes portrayed as, or does it simply have a different idea of what design is? Does it have a design ethos?

Is Samsung really the ersatz Apple that it is sometimes portrayed as, or does it simply have a different idea of what design is?

It doesn’t help that Samsung’s image has been largely defined against Apple’s. Take last year’s court ruling awarding the Californian company 1.05 billion dollars in damages for patent infringement, which was official confirmation of what many had been accusing Samsung of for years: if not copying per se then a culture of what’s known as “fast follow”. In terms of its design strategy, however, Samsung couldn’t be more different from Apple. Where Apple launches one new phone a year, Samsung will launch dozens, flooding the market with countless variations the way Nokia used to do. Rather than a singular vision, this scattershot approach lets the market decide what works. Samsung then follows up with rapid updates and improved versions. Ironically, given that Apple is a product of Silicon Valley, it is Samsung that has put the Valley rhetoric about “iterative design” and “failing faster” not just into practice but into overdrive.
However, these are just observations. You would have to get behind the scenes to gain a genuine insight into Samsung’s design culture, and that’s no easy matter. On the surface, the company is closed and paranoid, its global PR network persistently hamstrung by central command’s unwillingness to communicate. When I found out that Samsung had a design studio (or a “design centre” as they call it) in London, I spent two months trying to get in there. A straight “no” would have been fine, but instead I got endless buck passing that amounted to a “no”. Finally, a different door opened. I was offered an interview with Youngjun Kim, “Senior Vice President and Head of Advanced Design Team of Corporate Design Center” — otherwise known as Samsung’s head of design.

I met Kim in Milan during the Salone del Mobile, where Samsung was one of the many global corporations using the Furniture Fair to promote its design credentials. Its exhibition on Via Tortona consisted of a series of large photographic screens that you could customise using a Galaxy smartphone. Technologically it was very clever; as an experience it was about as entertaining as having your nose hair plucked.

In a back room, Kim was waiting with his interpreter and his PR chaperones. This had all the makings of a stonewalling, with visions of Kim feeding me the party line about the value of “good design”. In fact, he was surprisingly honest about Samsung’s shortcomings and extremely revealing about the nature of its ambitions.

“Does Samsung have a design ethos?” I asked. Sensing straightaway where this was going, he launched into a lengthy account of the company’s history that felt at times like a confession. “I joined the company in 1984, when Samsung and other Korean companies were followers, not leaders,” he said. It wasn’t until 1996 that they started to think about design as a market strategy, but even then they understood “design” to mean styling. Eventually they added functionality and the user experience, “but back then the designers at Samsung didn’t know exactly what that meant”.

As he was talking, Kim kept referring to a script on his lap. This, it turned out when I got hold of a copy, was titled Three Eras of Samsung Design — or, the official story. The first era, from 1996 to 2005, is called Design Identity 1.0 (subtitled “Balance of Reason & Feeling”). This is the bit when they didn’t know what design was. But it was followed by what looks like a series of five-year plans. Design Identity 2.0 (“2006-10: Create an Emotional Journey”) is the period when they discovered that research into how consumers behave and what they desire was the key to creating “an emotional connection”. But the most interesting era, of course, is the one that we are currently in, otherwise known as Design Identity 3.0 (“2011-15: Make It Meaningful”).

Again, the tone is confessional: “Until now, Samsung’s innovation has been delivered and understood in a ‘tech-driven’ context, which lacked warmth and ‘human-centric’ significance. Thus, Samsung is still felt as a technology brand that lacks a unique and friendly persona.”

I begin to wonder whether I was supposed to see this document. After that dose of brutal honesty, the future, at least, is more optimistic. Apparently Samsung will now focus on making consumers’ lives “more meaningful”. This is an ambitious, idealistic vision: “The aim is to inspire one another to create products that can deliver meaningful customer experiences, better their lives and the world that they live in.”

Although Apple is the product of Silicon Valley, it is Samsung that has put the Valley rhetoric about “iterative design” and “failing faster” into practice

Now, all consumer-facing corporations print guff like this by way of mission statements. But it’s hard to overestimate what a revealing document this is. Its willingness to be so openly self-critical belies the company’s closed and secretive image. More than that, though, here is a company that above all just wants to be loved. Loved the way that Apple is. With only two years left in Samsung’s latest five-year plan, will it find love?

Kim feels that the path to that goal lies in providing what he calls “a total service”. This is a joined-up, fully synced world of tech products interacting with each other seamlessly. If Samsung can deliver that, it will win over our love. The F8000 “smart” TV unveiled earlier this year is the missing link in that world. It is imagined as the “hub” of the household. But, again, Kim is quick to self-critique. He is not fully satisfied with the TV. “It needs to be improved; the evolution of the idea is endless,” he says.

Given that Samsung makes such a bewildering array of products, from smartphones and tablets to TVs, cameras, fridges and washing machines, isn’t it ideally placed to pioneer the Internet of things? Surely its vision of the “total service” combined with its manufacturing diversity could deliver that long-heralded age of products communicating with each other.

“Instead of answering that question,” he says, “let me share my worries. Our TV is a world leader, and our phones are world leaders. But my primary concern is to upgrade the other products that are not world leaders — the washing machines, fridges, ovens and vacuum cleaners. To create the ecosystem you mention, all our products need to communicate with the higher products. That is my homework.”

Can a company really be world leaders in so many different products? “As a designer, I yearn for this. It is my dream.”

Others are sceptical. Jan Chipchase, the renowned ethnographer and director of Frog Design’s Global Insights team, suggests that Samsung’s success lies in its vast marketing budgets. “If someone made the argument that Samsung products are less well designed [than Apple’s] then what does Samsung’s market share say about the importance of design in the marketplace? It would strip away some of the hype about design.” On the subject of Samsung pioneering the Internet of things, he says: “If you’ve ever been to anyone’s home that has a Samsung TV, dvd player and stereo, they’ll have three remote controls.”

One thing that can be said for Samsung, though, is that it no longer confuses design with styling. This is more than can be said of much of the tech press, which has attacked the brand for keeping a plastic chassis on its Galaxy smartphones instead of competing with Apple in high-end materials. Samsung retorts that it’s the user experience that counts, not the casing — touché. This is a notion of design that does not fetishise some mid-century modernist conception of the object. Above all, what sets Samsung apart is its rapid versioning. “They’re brilliant at putting products on the market, seeing if they perform and then focusing on the ones with potential and ditching the others,” says Chipchase.

For Kim, though, it’s not about one product or another; it’s the warm, fuzzy stuff he’s after. “More than becoming a world leader in a product, we hope Samsung can be a brand that is loved by the people.” Justin McGuirk (@justinmcguirk), architecture and design critic