Charging the university building with strong symbolic value, the Irish designers exploit the long foyer window along the entrance in order to present the sculptural mass of the underground Aula Magna to the city across the widened pavement. 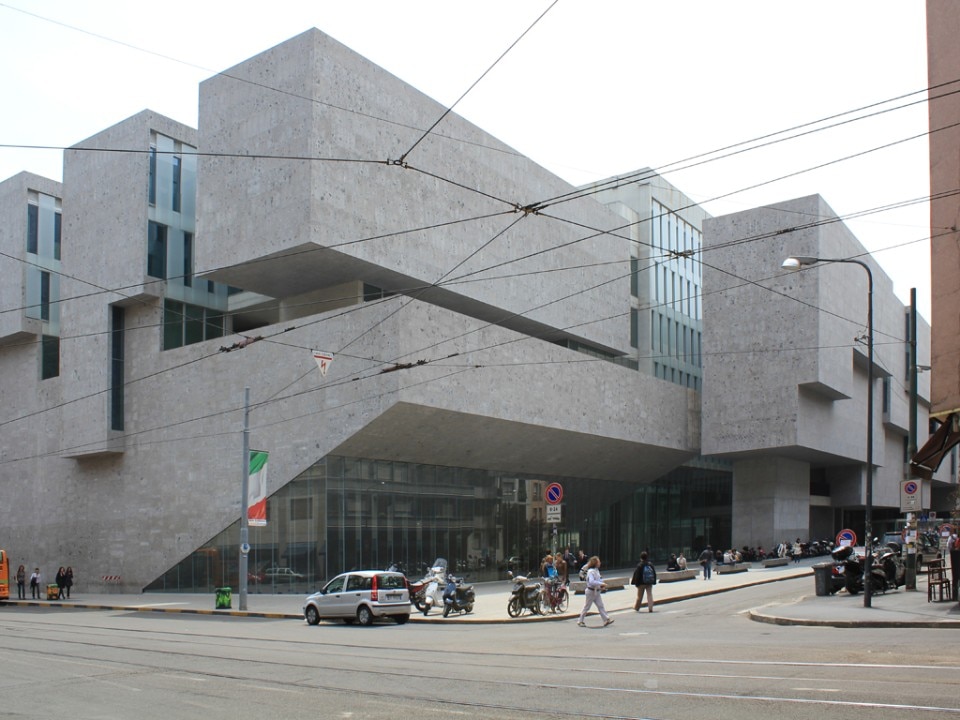 Charging the university building with strong symbolic value, the Irish designers exploit the long foyer window along the entrance in order to present the sculptural mass of the underground Aula Magna to the city across the widened pavement.

Above the three-storey basement, most of the ground floor is “permeable”. It consists in a sequence of public spaces and courtyards facing inwards or outwards (and acting as a city passage), with compact and articulated six-storey blocks suspended above.

Light from the east filters through translucent elements in the study spaces.

The whole complex, which occupies a rectangular site measuring 160 x 70 metres, is clad with Ceppo di Grè, a Lombard stone commonly seen on the facades of Milanese buildings and therefore a tribute to the city.

After his first trip to America in 1935, Le Corbusier observed with amazement, “Every college or university is an urban unit in its own right, a small or large city.”
William J. Mitchell, Imagining MIT, MIT Press, 2007

Who knows what Giuseppe Pagano must have thought during his days of agony at the Konzentrationslager Mauthausen in spring 1945. During the mental and physical struggle for survival, maybe the image of the Bocconi University flashed through his mind, a project he had finished with Giangiacomo Predaval just before volunteering to leave for Albania. A crisp, unattributed photographic report belonging to the Bocconi archives portrays a freely modernist project, designed with maniacal care right down to the last detail, including the interiors, with furniture that reminds us of Aalto’s, with airy spaces, with a commitment to include other arts and artists, such as Arturo Martini and his neo-medieval lions (curiously facing inward) presiding over the university’s entrance. By 1938, Pagano was in despair over the fate of Milan’s urban structure, which he described as being “bombarded by demolition”. But his building bequeathed an essential constructive exercise to the city: elevated on slender pillars, its facade barely seems to touch the ground of the site, not far from the old Vettabbia canal. This was a last shred of the original identity of Milan’s outskirts, composed of small landscaperelated diversities (water, fields and farmsteads), soon destined to disappear forever under the blows of building speculation, which by (un)civil tradition is more ferocious here than in other places. Having an intricate graphic composition in plan, half reference to Bauhaus and half lightweight monumentalism, the first Bocconi complex remains open to the Ravizza Park, like a monument to the sacrifice of the university’s designer. After years of alternating vicissitudes, with a few strokes of genius such as the buildings of another Muzio (father and son), the campus began its extension towards the city centre, stopping at Viale Bligny. Now that the great constructivist sculpture by Grafton Architects stands out against the featureless housing blocks and tenements, this depressing rue corridor would deserve to be demolished. Shelley McNamara, Yvonne Farrell, their enthusiastic design staff and an equally enthusiastic client are the creators of a new, truly contemporary piece of architecture. Milan [...] finally has something architectural to be proud about on an international level. [...]. McNamara and Farrell, who were true outsiders at the time, won the international competition organised by Bocconi in 2001, not by designing a useless blob that becomes an inescapable feature on the pages of evolved women’s weeklies, but by imparting a lesson in generative geometry, unconcerned with inane polemics about what’s real and what’s virtual, drawn by pencil or by computer, for a generic city or a politically indifferent city. Even braver than Pagano himself, who was too wrapped up in his ideological contortions and wanting to be absolutely modern under the flag of a reactionary regime, Grafton Architects have broken through the physical and conceptual barriers of the orthogonal cage that their predecessor built for himself – in all directions. Upward with the vitreous office blocks for one thousand teachers and staff members, an audacious experiment in spatial democracy that aims at giving each occupant light and air of homogeneous quality and quantity; inward by opening canyons of daylight to the communications/meeting spaces, lifting up stairways that cross each other as far as the eye can see; downward and toward the city, sinking the foundations 16 metres below street level, making space underground for the enormous volume of the Aula Magna, and then rising toward the exterior, lengthening the building in a gigantic futurist block toward the corner of Via Röntgen and Viale Bligny, a corner that they transformed into an urban place, an illusionistic inside-outside device that uses the reflections of a huge glazed wall to project images of the surrounding buildings. Their admiration for and study of Milan’s specific architectural qualities in the design and building of the new Bocconi complex did not prevent Grafton Architects from expressing themselves in an extremely powerful composition. It does not hide its accomplishment of “sculpting” the urban space in order to give the city a last monument, in the noblest sense of the word. [...]

Other architectures in Milan