At the turn of the millennium, a building by Frank Gehry in Downtown Los Angeles shows the potentials of parametric design, and aims at becoming an icon of renaissance for the entire city. 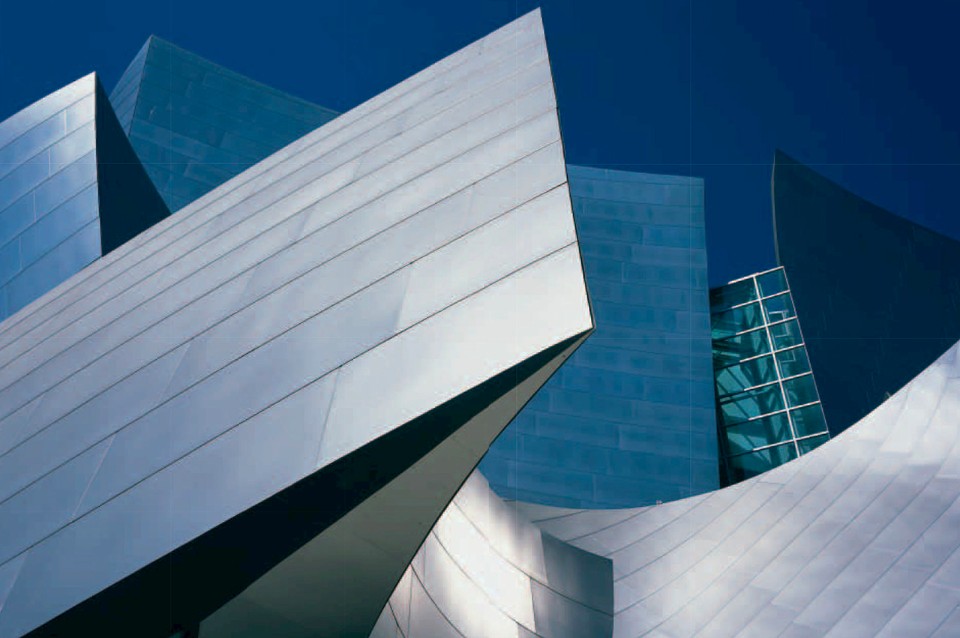 The Walt Disney Concert Hall in Los Angeles is one of the best and most relevant designs by Frank Gehry. The prolonged period required for its conception and construction, from the late 1980s to the beginning of the new millennium, also favored the constant fine tuning of the original proposal on the formal, spatial and functional level. At the same time, all along the 1990s the Californian working site remained the most complex and challenging testing ground for the architect, who was undergoing at the time a critical moment of evolution of his design approach.

The idea of adding a fourth hall to the three that the Los Angeles Philarmonic could already count on at the time is Lillian Disney’s. In 1987, Walt’s widow donates 50 million dollars for the realization of a building that would also be a tribute to her late husband, and his contribution to the history of the city. Gehry gets involved as a result of a two phase competition, including at first 25 selected architects, narrowed down to four finalists, amongst whom are Pritzker Prize Gottfried Böhm, Hans Hollein and James Stirling. The client (the Philarmonic) awards Gehry’s design as the only one which incorporates sensibly one of the brief’s fundamental requirements, that is the implementation of a clear connection between the renowned institution and a wide public, between the space of music performance and their urban context.

In this regard, it shall be considered that between the 1980s and the 1990s Los Angeles is struggling. The capital of West Coast hedonism has turned into the hotspot of social tensions crossing the US. In a succession of earthquakes and riots (such as the well-known Rodney King Uprising in 1992), Los Angeles seems to be actually transforming into the City of Quartz described by Mike Davis in his essay from 1992, a restless metropolis of thrilling and frightening contradictions. The home base of Los Angeles Philharmonic is in the Downtown neighborhood, which is one of the most affected by this process of evolution-involution, as the derelict core of a territory that has always been preferably suburban.

Therefore, in the 1990s the construction of the Walt Disney Concert Hall continues with great difficulty, as the economic crisis and the worsening of Los Angeles urban condition cool down the interest of private sponsors and dictate several budget cuts. Even the option of ousting Gehry is taken into consideration, but it is luckily set aside. Following this tormented genesis, though, the completed building is praised both by the public and by most critics, not just for the extraordinary acoustic qualities of its main hall, obtained thanks to Gehry’s close collaboration with Japanese specialist Minoru Nagata, but even more so for its relationship with its surroundings.

The Walt Disney Concert Hall occupies an entire block of Downtown grid, but its main axis is rotated from its orientation. As a result, a collection of irregular spaces are generated, which become the place for a more complex exchange between the architecture and the city. On every corner of the lot stands one entrance to the building, different from all the others for its shape, its use and the layout of its threshold toward the outside. The most impressive is certainly the full-height, glazed hall at the crossroad between Grand Avenue and 1st Street, home to the famous tree-shaped pillars and accessible through a pedestrian staircase. The latter is an unusual presence in a quintessentially car-oriented metropolis, and confirms Gehry’s will to stress the centrality of the city’s ground floor.

On a formal level, the Walt Disney Concert Hall stands out with its curvy sails and its shiny cladding from an urban landscape of dull and opaque cubes. From this perspective, the most pertinent comparison is with Bilbao’s Guggenheim Museum, realized by Gehry in the same years. The two buildings share their bright steel skin – although light stone was initially envisaged by Gehry for Los Angeles – and both are modeled through the Catia software, that at that time was revolutionizing the field of parametric design. To conclude, in both cases the captivating architectural icon aims at acting as a shared symbol of an urban renaissance process. For various reasons, including the cities’ different scale, this combination has proven more effective in the Basque harbor, but the Walt Disney Concert Hall has also triggered a certain “Bilbao effect”.

Read also: In 2014, an exhibition at the Centre Pompidou in Paris shares Frank Gehry’s architectural aesthetic and shows the full range of his highly singular creativity, through 225 drawings and 65 models.

Between 1987 and 2003, when the building was finally opened to the public, Gehry had evolved from an outsider (of sort) into a prominent member of the global architecture establishment. During his journey, he obtained a Pritzker Prize, in 1989, and he perfected that “Gehry style” that would be a trademark of almost all his following projects. As Michael Webb enthusiastically claimed on Domus in 2003, the Walt Disney Concert Hall was infused “with everything that Gehry has learned over the past decade. The sweep and subtlety of its shell and interiors and the dynamic flow of space place it in the pantheon of early 21st architecture”.