“Evidently, I could not have created my buildings without knowing and loving the work of Le Corbusier. Le Corbusier has had a great influence on my way of creating space”. (Richard Meier) 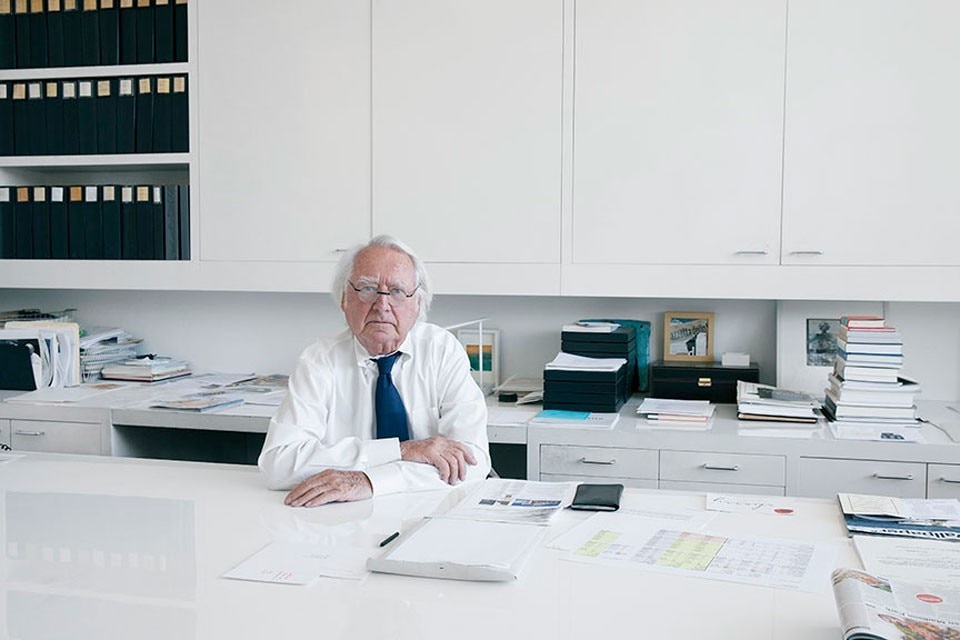 Considered to be one of the most important representatives of contemporary architecture, Richard Meier is often cited as the most classical of the heirs of modernism and, in particular, of the work of Le Corbusier, who he met during one of the American architect’s frequent trips to Europe.

Born in Newark (New Jersey) on 12 October 1934, Meier graduated in Architecture in 1957 from Cornell University and gained his first professional experience in the firm of Skidmore, Owings and Merrill (SOM) and under the guidance of Marcel Breuer.

As is often the case, his debut came with an exemplary series of detached homes which caught the attention of critics. These included his own home in Essex Fells (1965), the Smith House in Darien, Connecticut (1965-1967), which was the first example of a design process based on the contrasting of opposing yet balanced components, such as form and structure or art and technique, and which introduced the theme of memory seen as invention (one which Meier has never abandoned); the Hoffman House (1966-1967) and the Saltzman House (1967-1969), both in East Hampton. In particular, the residence for the Saltzman family was the first example of a highly plastic form of architecture, which saw strong evidence of the antithetic play of solids and space, between the static and the dynamic, based on a square and functionally-organised layout which was clearly read through the external perspectives and volumes (one needs only consider the large double-height window which marks the position of the living room).

Thanks to these few initial buildings, in 1969 Meier gained a position in the forefront of the international scene. The houses were in fact presented at the highly successful exhibition entitled “Five Architects” which was held at the Museum of Modern Art in New York to present the works of Meier, Perter Eisenman, Michael Graves, Charles Gwathmey and John Hejduk, who together formed what could be considered more an intellectual circle than a design group, based on collaboration in the field of architecture and on the elective affinities of the members which Drexler described in the exhibition catalogue as “an alternative to political romanticism”.

The interest which emerged with Meier’s first designs was confirmed by the Weinstein House in Old Westbury, New York (1969-1971), and the Douglas House in Harbour Springs in Michigan (1971-1973), the latter being considered a tribute to Frank Lloyd Wright’s famous Falling Water.

These were soon followed by the first commissions for large-scale projects. The residential complex of Twin Parks Northeast (1969-1974) and the Bronx Development Centre (1970-1976), both in New York, and the Atheneum in New Harmony, Indiana (1974-1979), were all forms of multi-functional celebratory architecture which represented the cubist approach based on movement and ramps - so much so as to require a three-dimensional reading of the work in order to fully understand its development - inherited from Le Corbusier. The Atheneum is also one of the first examples (together with the Bronx Centre) of Meier’s interest in developing a “total” form of cladding made of prefabricated white panels which reduce the possibility of imperfections to a minimum and substitute the vernacular language of the typical New England-style painted wooden planks which characterised the houses designed during the period of the Five Architects.

These panels soon began to become not only a simple form of façade cladding, but rather the two-dimensional expression of a spatial module (this time three-dimensional) which leads to the creation of architectural complexes. A demonstration of this is the High Museum of Art in Atlanta (1980-1983), where the sheets define the regular pattern of a net which allows for an immediate reading of their variations as a reflection of the evolution of the internal space, at the same time guaranteeing the compositive coherence which is typical of Meier’s work. The apotheosis of this period of the American architect's career was the Getty Centre in Los Angeles (1985-1997), an acropolis for contemporary art built on the Brentwood hills which reflects the style of hilltop towns in central Italy and the development of independent pavilions found in Villa Adriana of Tivoli (which also inspired the use of travertine. A partire dall’intersezione di due griglie tra loro sfalsate e introdotte per dominare il complesso contesto orografico in cui il complesso s’inserisce. With its sequence of courtyards, corners for meditation and a belvedere looking out over the city, the Getty has been described by Meier himself as an emotional form of architecture. “There is no space which defines the Getty - he said. It depends on how you feel”.

Along with the construction of large-scale projects, from the very beginning Meier dedicated himself to the design and layout of interiors, as demonstrated by the Aye Simon reading room in the Guggenheim Museum in New York (1978), the furniture designed and produced by Knoll International and, more recently, the design for the 66 Restaurant in New York (2002-2003). On the corner of Church and Leonard Street, it is located on the ground floor of a building designed by Henry Hardenbergh at the beginning of the 20th century, which became the focus of Meier’s work. The aim was to underline spaces and structures through a skilful use of colour.

Given the premises and the Le Corbusier inspiration of his work, Meier was also received with immediate success in Europe, where some of his best work can be found. This includes the Museum für Kunsthandwerk in Frankfurt (1979-1984), the Cultural Centre in Ulma (1986-1993), the Hague City Hall (1986-1993), the Canal Plus headquarters in Paris (1988-1993), and the Museo de Arte Contemporáneo a Barcellona (1987-1996). Three important works are located in Italy: the Jubilee church in the Tor Tre Treste district in Rome (1996-2003), the Ara Pacis museum (1995-2006)
on the banks of the Tiber, and the Citadella Bridge in Alessandria (1996-2017). The religious building, which was constructed as part of the programme for the celebrations of the 2000 Jubilee, was the result of an international call for tender through which Meier highlighted his interest for the autonomy of his architecture, here presented in the form of three sails directly erected on the parvis and made, like the rest of the complex, out of a particular white and self-cleaning cement (patented by Italcementi). In the case of the Ara Pacis museum, the underlying theme was respect for the existing historical construction - the Alter of Augustan Peace - which dates back to the 9th century B.C. - which has been enclosed in a glass and stone case set out on two levels.

Meier has held teaching roles in various prestigious US Universities, including the Copper Union in New York (between 1963 and 1973) and Harvard University in Cambridge (1977, 1980-1981).

In the words of Manfredo Tafuri:

If architecture is a sign of pure structure, Eisenman is the one who, at least in America, is closest to such a result. If instead architecture is to be considered ‘a system of systems’, if its expression belongs to various interwoven yet distinct forms of communication, then it is Meier who best captures the specific nature of that interweaving