Jean Prouvé: “There is no difference between building a piece of furniture and a building”

We retrace the career and history of the French architect and designer, one of the most influential figures of the 20th century modern movement in France. 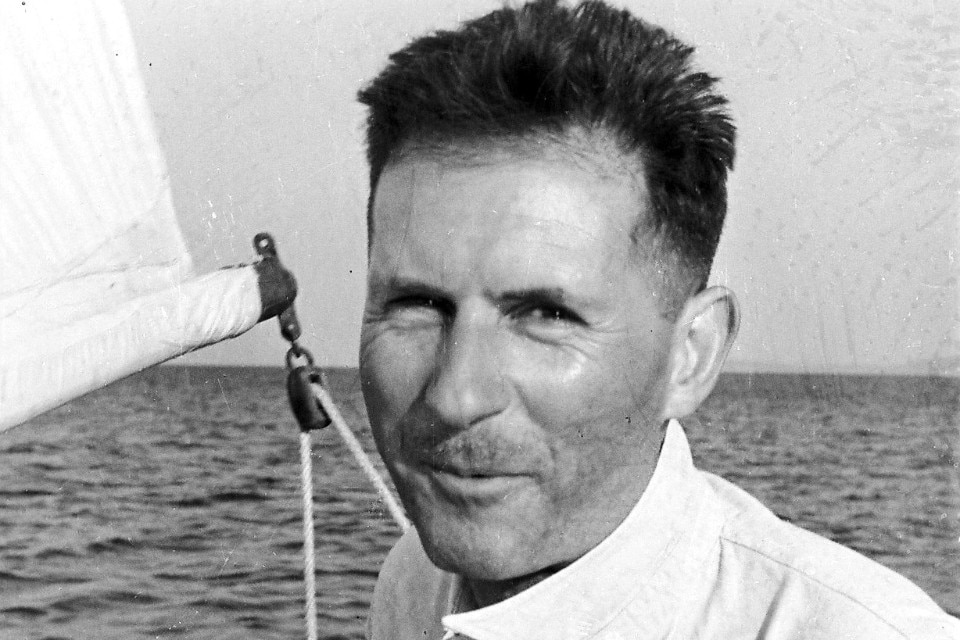 Jean Prouvé was a self-taught architect and designer. He is considered a pioneer for having methodologically innovated the disciplines of design – from architecture to industrial design, structural engineering and furniture design – with projects that largely influenced the design developments of the 20th century.

Prouvé’s main achievement was transferring manufacturing technology from industry to architecture, without losing the aesthetic qualities of the project. By embracing this vision, Prouvé managed to create a new style that overcame strict sectoral approach in favour of a multidisciplinary one that combined craftsmanship with industrial production to create objects that were a mix of design and architecture. In them, the purely formal aspect of design took on a secondary role and became functional to the object’s very purpose, its cost-effectiveness and sensible use of materials.

Read also: Vitra Sessions, the next digital event will be dedicated to Jean Prouvé

Born in Paris in 1901, the second of seven children, he grew up in a lively environment full of artistic people, among which were his father Victor Prouvé, a painter, sculptor and engraver, and his mother Marie Duhamel, a pianist. He soon established a lasting relationship with the glass designer Emile Gallé and the furniture designer Louis Majorelle, who were members of the “École de Nancy” – a movement co-founded by his father Victor to promote the decorative arts by producing in series different objects, with the aim of reaching total art, between art and industry – which profoundly influenced his way of thinking. In this context, Jean developed a vision aimed at democratising culture and making art accessible, thus interpreting his creations as a tool through which to stimulate and promote a greater social consciousness.

I was raised in a world of artists and scholars, a world which nourished my mind.

After finishing school, Prouvé was taught the art of metal craftsmanship first by Émile Robert in Enghien, and later by Adalbert Szabo. In 1923-24, he opened his own workshop in Nancy. This is where, up until 1954, he made wrought iron objects and also where he manufactured his first formed sheet steel furniture.

He later became interested in the production of architectural and design elements. In 1931, he began collaborating with important French architects such as Eugène Beaudoin, Marcel Lods, Charlotte Perriand and Pierre Jeanneret. In the same year, he opened “Les Ateliers Jean Prouvé”, the first of a long series of design workshops where advanced metalworking techniques led to his first successful furniture and prefabricated elements. These included the steel panels of his first major buildings, such as the Maison du Peuple in Clichy (1935-1939 in collaboration with Beaudoin and Lods), which featured sliding walls, removable floors and a movable glass roof that could be opened to maximise natural light.

Prouvé’s construction and design theory is based on manufacturing in a rational way, paying close attention to the material and the processing technique, as well as to the “constructive thought” of design as applied engineering in a logic of mass production and functionality. Aesthetics must be free of artifice – a modernist principle that goes hand in hand with the vision of the French Union of Modern Artists (UAM), which he co-founded in 1930 together with Le Corbusier, Mallet-Stevens, Pierre Jeanneret, Pierre Chareau and Charlotte Perriand. By embracing different disciplines, the UAM aimed to overcome Art Nouveau decorativism by reforming the discipline of architecture through functional purity of form and line, with an eye on new experimental techniques such as reinforced concrete.

Between the 1930s and 1950s, he designed prefabricated houses, office furniture, beds, tables, bicycles, chairs, school desks, interiors and lamps – objects that spanned the 20th century, where dynamic and clean materials and lines suggested their use, icons of post-war design (also thanks to Vitra’s re-edition of many designs after 2002). Worthy of mention are the Grand Repos recliner armchair (1930), in lacquered steel sheet and canvas; the different versions of the Standard Chair (from 1934), in aluminium and plywood - where the rear legs, which bear more weight, are reinforced and thickened; the armchair of the Cité line, (1931) created with Charlotte Perriand and Sonia Delaunay – with whom he collaborated on several occasions – to furnish the residences of the Cité Universitaire in Nancy.

Another iconic piece is the EM table (1950), based on an engineering aesthetic of necessity, where a cross connects the diagonal legs, thus emphasising the static relationships of the structure. This furniture was designed as part of the project of the Maisons Tropicales (1949-1951). Only three of these low-cost, detachable houses were made, they were made of wood panels and aluminium and steel elements, and they were meant to house French bureaucrats in the West African colonies. The first prototype was built in Brazzaville (Republic of Congo). It featured a double roof for natural ventilation, adjustable sunshades around the veranda and circular portholes of blue glass in the walls against UV rays.

The principle of portability became central for Prouvé, in objects as well as in architecture – clever assembly systems, designed for resistant structures, made buildings mobile, movable and dismantleable. This is how the Maison Metropole was designed, a “flexible” aluminium house measuring 8x12 m – which won a competition held by France’s Ministry of Education in 1949 for “a mass-producible rural school with classroom and teacher accommodation” – which despite its 100 m2 does not have foundations and can adapt to different environments.

Prouvé became increasingly interested in the possibilities offered by new materials - sheet metal, glass, polymers - in response to the problem of living. In fact, he made his debut on Domus (no. 210) in 1946, in an article called The House of Man, that is, a dwelling for all human beings - a vision with a modernist approach, also shared by the theories of Le Corbusier who, in those same years, turned to Prouvé to design the interiors of the Unité d’habitation in Marseilles.

Prouvé also became more politically active in the late 1940s and early 1950s: as an active member of the Resistance during the Second World War, he was elected mayor of Nancy after the city was liberated. In 1947, he established the Maxéville factory, a 25,000 square metres facility in which worked 200 employees (and which he left in 1952, due to disagreements with the majority shareholders), a great success in a France with a growing population, where he produced furniture, décor and prefabricated buildings, undertaking extensive architectural research into the use of aluminium. He was also entrusted with the design of the fourteen Maisons industrialisées (1950-52) in Meudon, which could be easily assembled by four people.

The Ministry of Reconstruction then commissioned him to design a large-scale production of wooden residential buildings for refugees, asylum seekers and homeless people. The basis was a housing module made of prefabricated elements, industrially manufactured by Ateliers Jean Prouvé. The designer was the first to spend two months in one of these dwellings in Brittany, in response to his sense of ethics.

Described by Le Corbusier as “the archetypal builder”, Prouvé worked on numerous projects after Maxéville, such as a café in Evian, the Aluminium Centenary Pavilion in Paris (with M. Hugonet, 1953-1954) and the façade of the Hotel de France restaurant (1953) in Conakry, Guinea, which consists of screens that swing open to the sea.

My house is built with recycled elements.

In 1954, he designed and built, together with his friends and daughter Catherine, his own house on the hills of Nancy, the Maison Prouvé, which became a historic monument in 1987.

It is a light and flexible structure, an assemblage of standardised elements, with a simple, linear layout following purely functional principles. A one-metre-long module, (the size of the prefabricated panels), is divided into three areas: private, public and service. Porthole-like perforated aluminium panels make up part of the façades and the entrance door – a detail that will go down in architectural history along with the corners of the doors, rounded to facilitate the machine-cutting process. The 27 metre long, foundationless house manifests that approach to building by assembling industrial elements and by manual labour, according to the four pillars of Prouvé’s design ethic: affordability, comfort, functionality and durability.

In 1954, he also designed the Maison des Jours Meilleurs (the House of Better Days) in response to an appeal from the clergyman Abbé Pierre to build emergency accommodation for people in need.

Among the many projects that followed, we should mention the collaboration with Jean Dimitrijevic on the Musée des Beaux Arts du Havre (1952-1962) – a structure made of glass, steel and aluminium – and the collaboration on La Maison du Sahara (1958), a modern prototype of a “village house” for extreme climatic conditions, developed around an aluminium sheet roof with a light structure, a rigid tent under which the domestic space is articulated. As Fulvio Irace states, “It was the shelter concept that Prouvé had in common with Richard Buckminster Fuller’s American experiments and, to some degree, with Mies van der Roheìs obsession with the syntagma of the roof”. (Domus 1046, 2020).

During his career, Prouvé also worked in Paris – from 1957 to 1968 as head of the construction office of the Compagnie Industrielle de Matériel de Transport (CIMT), then as a freelancer in his own architectural consulting firm (1968-1984), from 1957 to 1970 as a professor at the Conservatoire des Arts et Métiers (CNAM). In 1971, he was chairman of the jury for the Centre Pompidou architectural competition, playing a major role in selecting the design of Richard Rogers, Renzo Piano and Gianfranco Franchini.

In 1980, wanting to focus again on designing his own furniture, Prouvé returned to Nancy, where he died in 1984.

The “great tinsmith”, as François Chaslin (1983) defines him, always acted as a utopian, combining practice and theory – throughout his career, he managed to combine functional requirements, use of materials and economic issues with the complex demands of mass production.

Speaking of his work, Rolf Fehlbaum, chairman emeritus of Vitra and owner of one of the largest collections of products, living prototypes and maquettes designed by Prouvé, says: “In the tradition of the Modern Movement there is the insane idea that you can change the world with chairs, tables, sofas, lamps. One could say that it is ridiculous, but we believe in it and we are still working in this direction” (2011).

Read also: African Fabber House is born in response to the mistakes of colonialist architecture