"Without taking risks, without working on objects which do not correspond precisely to a consolidated idea of beauty, our ideas will not develop, and the aesthetic quality of our work will gradually deteriorate... sometimes, less taste is more taste." (Ingo Maurer) 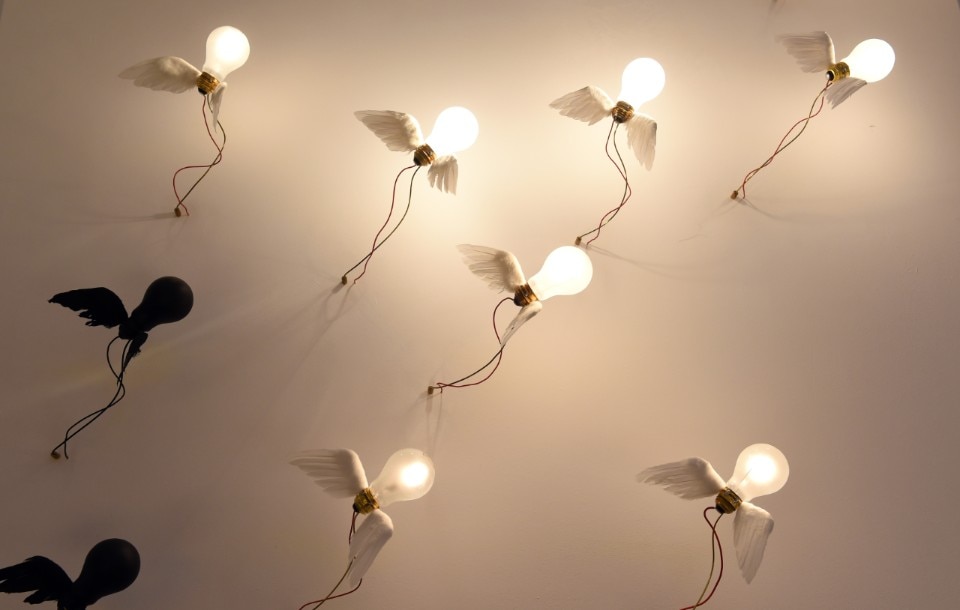 Ingo Maurer (1932-2019) was a German entrepreneur and designer who specialises in the production of lighting.

He was born on the island of Reichenau (in Lake Constance) in 1932, the son of an inventor who patented a machine for smoking hams. He trained as a typographer and then graphic designer in Switzerland and Munich (1954-1958), where in 1960 he opened a small artisan workshop, Design M, now an international company called Ingo Maurer GmbH. After finishing his studies, he took a three-year journey to the United States, where he first came into contact with the world of design. Moving between New York and San Francisco, he worked as an independent designer on important graphic design projects for companies such as IBM.

A true self-taught outsider, he made his official debut in 1966, when he designed the “Bulb” table lamp. The idea originated from a consideration of the simple light bulb, that “perfect meeting of industry and poetry”, and laid the foundations of Maurer’s style; technological innovation was seen both as an essential characteristic to be continuously updated and as a way to express the contemporary beauty of a light which was capable of moving the user, stirring up memories and sensations.

Conceived as a light bulb contained within an enlarged hand-blown glass shell which mimicked the form of the bulb itself, “Bulb” is also the founding product for Maurer’s success. The prototype, made in a glass foundry in Murano, was presented in the Herman Miller showroom in Munich, and was a huge success with both the public and critics, allowing Design M to begin business. Still produced today, “Bulb” is also the first of Maurer’s reflections on the recognition of the figurative value of common light sources, carried forward mostly by his output during the 1970s, with projects such as “No Fuss”, “Pollux”, “Thomas Alva Edison” and “Big M”.

Many of Maurer's works are created to be mass-produced, while others are designed as highly-varied single copies which take the concept of one-off items to its limits, based on elements of surprise and disorientation. All are, however, the result of very a strict level of control which the designer applies to the entire production process, and often carried out via artisan methods by Maurer himself. Examples of this include a series of lamps in Japanese paper – including “Zettel’z” (1997) and “MaMo Nouchies” (1998) – “Birds, birds, birds” (1992) and “Luccellino” (1989), covered in duck feathers, as well as “Porca miseria!” (1994), created from the free and always different assembly of fragments of porcelain and crockery.

In particular, “Birds, birds, birds” and “Luccellino” (whose name is a combination of the Italian words for light (luce) and bird (uccellino), are hybrid objects which ironically allude to the animal world through the use of modest materials – bulbs and feathers – combining industrial products with manual crafts. “Zettel’z”, instead, is a spectacular chandelier made up of a myriad of sheets of high-quality paper which are connected with simple clips to a filiform support structure made of steel cables. The packaging for the suspension lamp contains both pre-completed sheets and pieces of blank paper on which the user is invited to write or draw. According to Maurer, “Light passing through paper is the idea behind Zettel’z, in combination with poems, messages – maybe to the beloved one – sketches, children’s drawings, sexy pictures, mysterious riddles, recipes or maybe just ‘Forgive me, darling, for my bad behaviour’, personal documents” in which a fundamental role is played by the handwriting of the various owners.

See also: The sacred and the profane

As well as the emotive aspect, playfulness and interaction with the end user are also fundamental in Maurer’s design. One only has to think, for the first, of the lamp “Bibbibi” (1982), supported by bright-red stork legs, or - for the second - of objects such as “Hearts Attack” (1997), which offers infinite possibilities for the orientation of the forty-eight moveable hearts, made of synthetic materials and mirrors, of which it is composed.

Alongside the production of lighting, Maurer also began creating a series of installations – which are considered almost artistic performances - for exhibitions, cultural events, underground stations, theatres and even shopping centres, which become opportunities to experiment with the lights in settings which go beyond domestic scale, moving towards urban dimensions. Very often, these projects lead to the design of new lights, which are then put into production. This was the case, for example, with the “XXL Dome” (1999), which was originally studied of the Munich underground.

In this light, the exhibition “Ingo Maurer. Lumière Hasard Réflexion” held at the Fondation Cartier in Paris in 1989 was fundamental. The first true installation by the German designer, the exhibition was an opportunity to show his work through the creation of twelve environments – tributes to artists such as Daniel Buren and David Hockney – in which a prime role was played by the sensory perception of the ephemeral, thanks to the use of mirrors, air, smoke and water. For this occasion, Maurer designed the “Tableaux Chinois” (which was then re-proposed at the Vitra Museum and the Centre Pompidou), writing: “it is the play of waters, mirrors, live fish and the movements they create. A 250 x 180 cm aquarium, 25cm high, with a mirrored bottom, filled with water and floating mirrors on the surface. A spotlight is pointed at the aquarium, which reflects its contents onto a screen. The result is like a large Chinese drawing, brought to life by the casual movements of the fish”.

It is also often the case that Maurer’s works are the result of random events. The “Willydilly” light (1983) for example, is made up of simple pieces of paper hung directly onto the power cable with clips.

Among his personal gurus, Maurer includes the figure of Achille Castiglioni, to who he dedicated the lamp “Hot Achille” (1994), a true direct citation of the famous “Parentesi” (1971), which was designed by the Italian maestro for Flos. He is also inspired by Japanese abstractionism, minimalism, the works of Calder – whose furniture is represented, through simplicity and compositional freedom, by “YaYaHo” (1984) – and Pop imagery.

The world of art is also the inspiration for a series of works on the theme of collage, in which the ideas of reassembly and re-use are combined to evoke archetypical images: “Bellissima brutta” (1997) was born as an artistic experiment to test the use of LEDs, while the table version of “El.E.Dee” (2001) is perhaps the peak of his research into the possible combination of art and technique.

His most recent projects include a wallpaper (2011) with LED designs incorporated and which can be remotely controlled.

In the words of Alessandro Mendini: "I have always taken only brief glimpses of Ingo Maurer’s lights. I have always simply said 'he is a magician'. But I never wanted to ponder too much on this, I have never been able to define it, and therefore I have never thought about it. Ok, everyone knows and says that Maurer has always designed lights. But is this really true? No, it’s wrong. Maurer doesn’t design lights as any normal, typical designer does. Maurer 'uses' all kinds of bulb, he combines them, exploits them, he fits them together, he dismantles them, he divides them, etc., for purposes and aims that are not directly connected with the intention of 'designing a lamp as an instrument to make light'. This ambiguous slipping of objectives is the reason why I have not yet wanted to (or known how to) consider the work of Maurer. It is a fascination which has remained a mystery. A light which is not meditation, but rather the nervous energy of dispersion."