In a reportage by Pierre Restany for Domus, the photographs of Ugo and Nini Mulas capture the Venice Biennale at the apex of Pop Art. 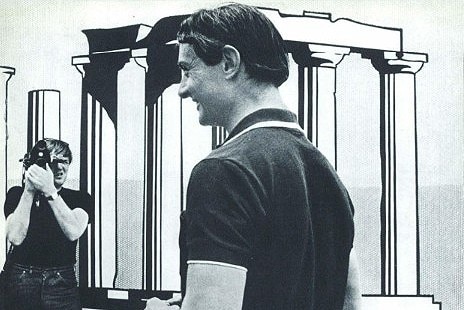 That of 1966 was one of the most overlooked editions of the Venice Biennale, mistakenly. Caught between that of 1964, which corresponded with the milestone landing of Pop Art in the Old Continent, and that of the youth contestation of 1968, the 1966 Biennale has often lived in the shade of its two neighbouring editions. It was, though, a no less fascinating Biennale, faithfully mirroring Western culture in the year that marked the apex of its Pop splendour: from the streets to the music and, inevitably, art and design too.

The 33rd Biennale, as noted by Frenhc critic Pierre Restany in his reportage on Domus 441 published in August 1966, saluted the newly-found playfulness of art and consolidated the triumph of the homo ludens over the homo faber.

Hence, in the year Ettore Sottsass Jr. ventured to London, the then (a)moral capital of this creative explosion, to document its kaleidoscopic boutiques for Domus, Ugo and Nini Mulas sailed to Venice to capture such an atmosphere.

Their photographic reportage was complemented by the precious words of Restany, who – with the privilege granted by contemporaneity – certainly did not go easy on many names who we now hold in high regards as untouchable masters. At the Biennale “there is nothing but folklore”, argued the French critic on the pages of the magazine directed by Gio Ponti.

As Italy unconsciously headed towards the end of the economic miracle, busy as it was to celebrate its unprecedented pop status without realising the criticality of consumerist society, Restany observed how art “has today changed its means because it obeys to other scopes.”

It followed that two years after the Venice debut of Pop Art, the criticism of consumerism that had defined the current had become nothing but pure divertissement.

“At the dawn of the Second Renaissance, the function of art seems to emerge as that of the poet of free time, and at the same time that of the professional of the game,” wrote Restany who at the 33rd Biennale discovered an art that had become a game “considered as a highly spiritual activity, as a celebration of the spirit and the senses. In this sense, this year’s Biennale marks a real victory for the homo ludens over the homo faber.”

A playful vein that broadly defined the society of the mid-to-late-Sixties, with its obsessions for comics – from Batman and Barbarella to Roy Lichtenstein’s canvases – and the dozens of flamboyant and lysergic characters that populated the comedies of the time. Even the retrospective that the Dutch pavilion dedicated to Constant, father of the New Babylon project (1956-1974), served to underline – as noted by Restany – the centrality of play as a common ground for design and architecture in the (counter)culture of playgrounds and Provos.

Above all, though, it seemed as the massification of culture and consumption was in fact responsible, more than the spirit of the time itself, for the creation of the “playful function of art as the only common denominator of otherwise apparently different experimental research. [...] A universal avant-garde that comes from all countries: from Latin America to Scandinavia, to Paris, London, New York, Los Angeles, or Tokyo.”

Ugo and Nini Mulas’ photographs for Domus are flawless in capturing the playful spirit identified by the French critic. But also 1966 as a symbolic year of technological, social and economic progress distributed more organically than ever from East to West, and capable of enhancing with elegance works that moved between modernist alienation and the dream of the Space Race.

Among these was Eugenio Carmi’s SPCE, a fascinating electronically controlled polycyclic structure, which the failure of the electrical system of the Biennale “condemned to total impotence”, as noted by Restany.

A decision that, as the critic commented, “must not be considered an anti-pop gesture, nor an official recognition of neo-geometric, but mainly as a very acute and realistic judgment of the actual situation in the art field”

But, above all, it was the year of the debut of The Garden of Narcissus, the now cult performance by Yayoi Kusama. The Japanese artist – officially not invited to the Biennale – filled the garden of the Book Pavilion with 1,500 silver plastic spheres in which the passers-by could endlessly mirror their image. Restany grotesquely noted how on the opposite side of the gardens one could spot the stacked boxes used for packing the spheres, which Kusama sold to the visitors at the cost of $2.  “She did excellent business, until the Biennale authorities vetoed it.”

A symptom of the mutation of art in the consumerist society, or the ability of the Japanese artist to adapt to the Italian entrepreneurial shrewdness? Rather the assertion of the victory of the homo ludens over the homo faber, and the celebration of art as play. An approach that today is felt as needed as ever within an artistic discourse in which outrage is long neutralised, but the fear of cancel culture threatens to suffocate the genius.

Read also: Biennale Arte 2022: the pavilions not to be missed
Share