The art of the Olympics

The relationship between art and sport goes way back further than one might think. From the Olympics and the Paralympics to the Pentathlon of the Arts. 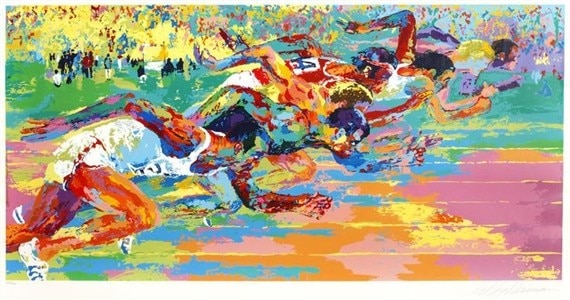 Plato competed as a wrestler and boxer during the games in Delphi and Corinth, while Euripides triumphed in Athens in the same disciplines. In Greek culture, the body has always been the mirror of the soul; therefore, to be considered virtuous, a man must be athletic, sporty and strong. On Sunday 5 September, the closing ceremony of the 16th Paralympic Games, which began on 24 August, was held at the Japan National Stadium in Tokyo. Five hundred and thirty-nine events, twenty-two disciplines and one hundred and sixty-one participating countries. “The Paralympic Games have not just been historic, they have been fantastic,” said during his closing speech Andrew Parsons, the president of the International Paralympic Committee. And he continued, “Athletes broke records, athletes won hearts, athletes opened minds. Importantly, athletes changed lives”.

Read also: What remains of Olympic architecture, when the Games are over

This spectacle is so ancient that it leads us to reflect on the fact that it is thanks to the Olympics that the greatest open-air museum of antiquity was established, since each winner had the right to have a statue of themselves built on the field. The mecca of the games was and always will be Olympia, which did not only hold sporting events: during the competitions, the champions, the ‘athletes’ of art, would also gather in the sacred city of the Peloponnese to show everyone the fruits of their genius, that is, their art.

In 455 B.C., Myron created perhaps the world’s best-known sculpture, the Discobolus, which we only know through its copies, the most famous of which is the Lancellotti. The sculpture was first designed and then created in bronze, a material whose function was to enhance, through its brilliance, the athlete’s body, making it almost divine in its form and action. Leaning forward, the torso twisting, the right leg bent to support the weight of the action, this sculpture tells with extreme precision the story of the athlete’s body and soul. The chiastic position brings balance to the physical thrust. Everything is balanced, the whole body is concentrated. The athlete, in fact, was the subject who embodied the concept of kalokagathìa, that is, the beauty of the body being absolutely inseparable from the beauty of the spirit. This concept considers physical beauty to be linked to the moral and ethical values of the subject. An athlete, to be defined as such, must have rigour, a kind soul, and must be dedicated to studying and becoming more and more cultured.

In the last years of the 19th century, great discoveries, from Troy to Mycenae, aroused great cultural interest, especially in ancient Greece. Ernst Curtius, the German archaeologist who, in 1877, brought Praxiteles’ Hermes to light while excavating the ruins of the Temple of Hera in Olympia, collected numerous testimonies of the games in honour of Zeus, and so while ancient sports were making a comeback, new ones were being created. While the cultural world was abuzz with new discoveries, French Baron Pierre de Coubertin decided to embark on a visionary project: a new Olympic Games in Athens. In 1896, with 285 participants from 14 countries, the project was launched. De Coubertin himself declared during a conference in 1906 that he wanted “to reunite the Muscles and the Mind, once divorced, in the bonds of a legitimate marriage”. These competitions, however, involved the participation of artists instead of athletes, and at the 1912 Stockholm Olympics, the Pentathlon of the Muses finally made its debut: it was a competition of painting, sculpture, architecture and music which unfortunately came to an end in 1948.

To reunite the Muscles and the Mind, once divorced, in the bonds of a legitimate marriage

In 1970, LeRoy Neiman, a contemporary American artist, painted a work that, through the colours and lines of force, encapsulates all the frenzy, power and joy of these competitions that have such ancient history. The colours are vivid, unevenly spread, as if they were changing due to the speed of the bodies and the different lights of the day, sequential frames frozen in time giving the viewer the idea of the athletes’ speed and power. An oblique line crosses the work from left to right, so deep that it never seems to end.

“May art leave the stage of contemplation of beauty to express the beauty of energy”, declared Raniero Nicolai, who won the gold medalist for literature at the 1920 Antwerp Olympics. The same beauty of all those strong-willed and stubborn athletes who astounded us with their Olympic ventures.