Adrian Paci’s Art House, deeply-rooted in the local territory, is a residence that valorises cultural energy

The Albanian artist explains how, by transforming his family home in a space for encounter, thought and knowledge, he has put his home town, Scutari, on the international art scene. 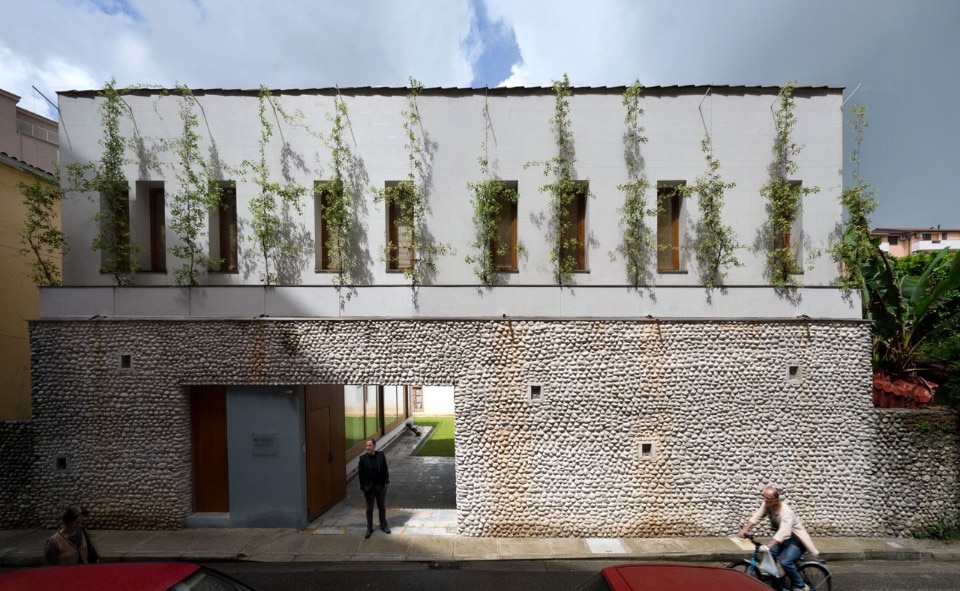 Art House is a new house set on the foundations of an old building. Deeply rooted, it is the idea of an artist, Adrian Paci, for whom his era, place and community of origin have always been active reference points that he holds close in life and in art. Not as situations to return to, but as filters through which to decipher the world and construct a future. In the same way, this house is seen not as a place of nostalgia, but as a projection, a wide-ranging long-term project which has a tangible impact on the territory.

Paci was born and raised in Albania. The son of an artist, he has always experienced art not only as part of the public dimension, but also as a form of intimate and private life. He has lived in Italy since 1997. “Perhaps - he says, jokingly - behind the idea of Art House lies the most classic desire of the expatriate, which is to build a beautiful house in his home town”.

The fact is that there is little of the cliché here. Rather, it is an exceptional work of generosity and rigour. The architecture, designed by Filippo Taidelli and recently nominated for both the Mies Van Der Rohe Award and the Aga Khan Award, is clean, rigorous and flexible in function. The large house, which looks out over a garden it shares with the building in front, is an enveloping habitat that holds the memory of an artist who lived there and who died prematurely. Ferdinand Paci, Adrian’s father.

It also plays a role in asserting a principle in the face of invasive economic dynamics which risk disfiguring the traditional urban fabric of Scutari. But above all, born from the desire to contribute to the cultural activity of the country and the city, it is characterised by a fundamental concept, that of turning the residence into a place for encounter, thought and knowledge in which the energy of art can be exploited. It is therefore an open and welcoming house, which, without taking from the habitative aspect, is a place of encounter and dialogue between the Albanian art world and the most important figures from the international art scene.

How did the project develop?

Over time. The idea dates far back. Even as a child, my home was both a habitat and a place dedicated to art. It was the location of my father’s studio. I remember there was a constant need for maintenance, repair, “touch-ups”. I have always felt there was a need to do something radical. I also really wanted my father’s work, above all his drawings, his portfolios, to have an appropriate and healthy space. A few years ago, the project gained speed due to real estate processes under way in that area of Scutari, with houses being purchased and then demolished to make way for larger buildings. I was forced to make a decision quickly. I loved my family home and I wanted to protect it. I was also disturbed by the idea of passively giving in to real estate speculation, which i dislike. Thus the idea took shape. However the space of the house has changed a little. The building which has just been constructed opposite has rendered our courtyard particularly exposed.

Therefore, we kept the central courtyard, but we have rotated the house, which now faces away from the street, and we have created a form of protection from the outside, with a wall made from river stone specific to the area and topped with another typical element which was identified by Taidelli during his various surveys, a long space in which jasmine grows. Inside, large windows open onto the garden. Another consideration was that I didn’t want a holiday home. Not living in Scutari permanently, I wanted to be “forced” to return. Besides, in Albania - as is the case in Italy - one senses a lack of situations in which art can be experienced as action in a dimension of profound daily interaction without losing public motivation, a dimension which is related neither to the market or to institutions.

This was how the idea came about. Then there were various other considerations. I grew up in Albania in a period of isolation during which there was no relationship between the local and external scene. Being able to bring important international experiences here seemed to me to be a way to fill a void I felt, responding to needs which accompanied me as I grew up, as well as those in the present. Another was that Albania was centralised during the Communist period and it has remained that way: everything happens in Tirana. But other cities, such as Scutari, also have a past and a present to bring to light. Lastly, I wanted to get away from the Albanian image of kitsch, due to this spontaneous form of extravagant and bizarre architecture, this fanciful and slightly grotesque post-Communist explosion.

What about the activities of the Art House?

We try to maintain the right balance between continuity and improvisation. We follow a basic structure, but at the same time with freedom, proceeding with gradual “adjustments”, trying not to repeat ourselves. I think it is important to continuously modify the way we relate to the space and to others. The guests at the numerous events that we have organised since we opened in 2015 have been active figures of varying roles in the art world: critics, curators, museum directors; from Marta Gili to Adam Budak, to Charles Esche; artists such as Anri Sala and Yael Bartana. But the field is much wider. For example we have had Vinicio Capossela here.

Naturally there is a close relationship with Italy. Every discussion is an opportunity for encounter between the guests and Albanian artists, above all those from the younger generations, for whom we try to help to access the international scene. Then there are collaborations will well-established organisations, such as the festival “Lo Schermo dell’Arte”, or the Van Abbemuseum. But one of the more florid initiatives is without a doubt the Art House School, with the participation of ten artists. Again in this case, the modality varies slightly each time. This year we are also starting the residency programme. The first guest artists are the duo Chiaralice Rizzi and Alessandro Laita.

So you have a beautiful house with a history going way back, six rooms and lots of other spaces, a garden with two poplar trees and an area dedicated to your father’s works. There is a rich programme of activities, thanks to which Scutari has become part of the international art circuit. And within this framework, there is still the possibility of continuing to experiment. Is there anything you feel is missing?

A study, so I can have a moment to myself!