Milan. Michael Fliri and the animation of animism

At the Galleria Raffaella Cortese, a twin solo show by the South Tyrol artist exhibits works experimenting with the face, masks and moulds of hands. 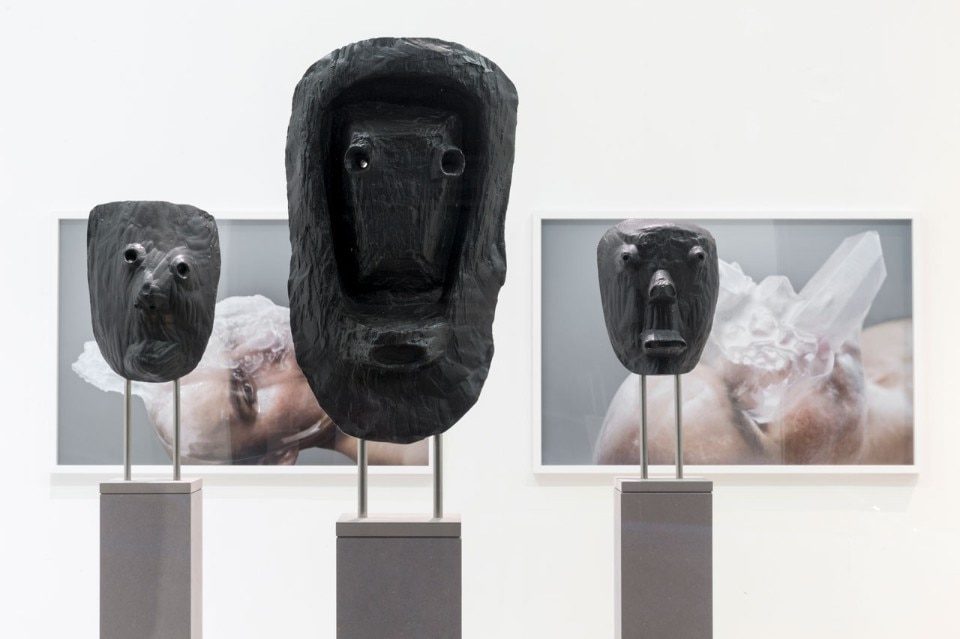 A small group of suspended black masks look out from the windows of 1 Via Stradella in Milan. The surfaces are dark, swollen, unpolished. But through the melted surfaces and the reflections of the windows, three holes can still be made out in each, two for the eyes and one for the mouth. Where do I end and the world begins (2014) is the title of a series of sculptures Michael Fili (born 1978, Tubre), who lives and works in Innsbruck, Zurich and Tubre, has arranged to guard his third solo show, in the spaces of the Galleria Raffella Cortese. This work, made up of dozens of masks, is a selection from a larger series and represents the only three-dimensional work in the exhibition.

Where do I end and the world begins is a statement of a poetics and an epistemological key to the whole oeuvre by the South Tyrol artist. After working with masks from the Mask Museum in Diedorf (Germany), he created the sculptures by using a compound ceramic and then varnished them with an opaque black paint. Before this final stage, Fliri followed a double, positive/negative moulding process. To create the first impression, he poured a mixture of lacquer and gesso into a first mask, which was then attached to a second – creating in a single work, on a single face, the impression of two different masks, one turned inside the other.

The ethnographic, cultural and historical legacy entangled in this work is embedded and fused with the performance origins of the artist, who from the start of his journey (in works such as Der schneemann, 2001, Give doubt the benefit of the doubt, 2010, I pray I am a false prophet, 2015 and The light never sees a shadow, 2018) has absorbed, transliterated and transformed the native fable of the Krampus. A “Krampus” (from the Bavarian work krampn, meaning dead or rotting, or from the German word kramp, meaning claw) is a transvestite devil who, according to tradition in German-speaking areas, accompanies the colourful figure of St Nicola da Bari during the winter solstice. These masks embody the exorcism of the demon, who is vanquished by the patron saint and so is obliged to serve him. The disguise must never be removed in public, however. Anyone trying to remove it risks dishonouring the performer. But the impenetrable mask, as in Fliri’s work, takes us back to the face behind it. It is the definition of Dark and Light – one part is visible, the other unconscious, both adhering to the world, incorporating it only when it is looked at and breathed in from through a mask. The subtle guise becomes a point of contact with the landscape and with the alteration of the features of the face, a starting point from which the artist can descend into himself.

This is how, against the backdrop of Where do I end and the world begins, the photographic series My Private Fog II begins. Fliri’s face is shown horizontally in the foreground, laid out in profile below faint masks, which seem like outgrowths from his face, against a grey background, a synecdoche for a landscape that is only hinted at. The transparency of the mask allows us to make out the facial features of the artist, who is left to hide beneath his own breath. The dysmorphic shapes of the masks change from one photograph to another, leaving us to guess at the long process of mineralogical research undertaken by the artist, who collected rocks physiognomically similar to his own face and then reproduced them in plastic using a vacuum mould. Wearing the artefacts, Fliri can be seen underneath, a portrait blurred by the condensed moisture from his own lungs.

The level of transparency and visibility changes in parallel with the physical state of the artist, who observes how much remains outside himself, depending on how far his breath allows it. A few metres away are a series of masks created by moulds of hands (Gloves, 2017).
Although the exhibition at Galleria Raffaella Cortese is the first time they have gone on show, here they point to Fliri’s most recent work, which is on display across the street, at number 4. There, in a single long room that is almost completely dark, the disappearance of the artist behind his own appearance is completed. The video installation AniManiMism (2017) reveals only his dancing hands, its four channels showing four different points of view, the work backed by a well-chosen soundtrack. A transparent mask, created from multiple components to allow the jaw to open and close, moves like a ventriloquist’s alter ego, while in the background, watery light blue shadows reflect in a skull that bangs its teeth together with every touch of the artist’s hand.