Carsten Höller tells us how he, with his accomplice the neurobiologist Stefano Mancuso, was able to transform Palazzo Strozzi into an eccentric lab. 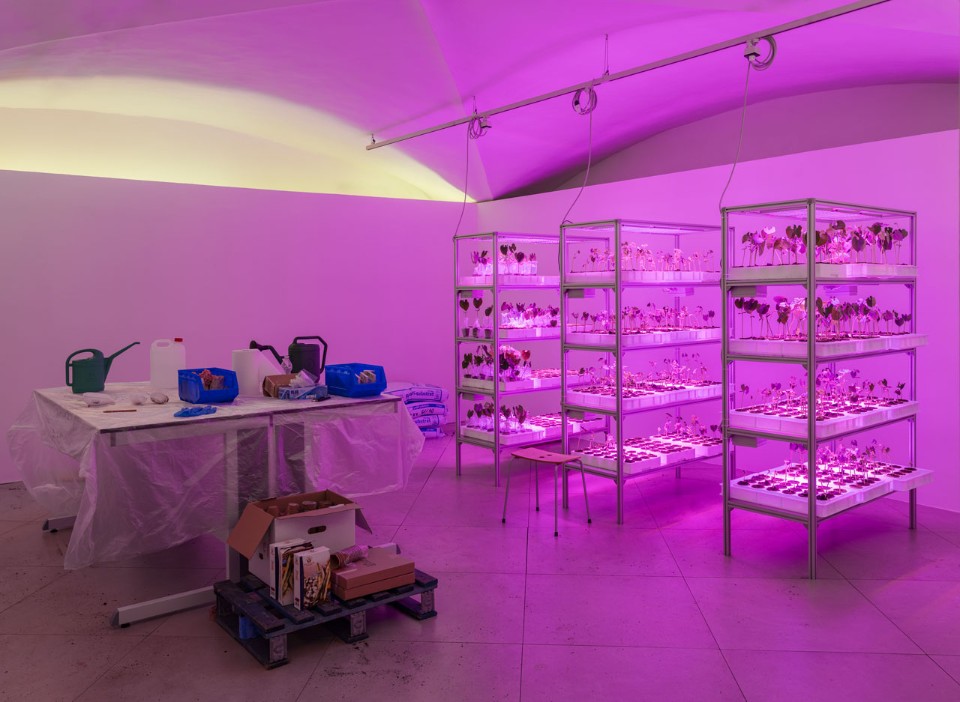 “Do you know what Carsten does in his free time at home in Ghana? He catches migratory birds with nets; he weighs them, attaches a small ring to their legs as a form of identification and then sets them free. For him, monitoring species and migration is an absolutely normal thing,” states Stefano Mancuso, a neurobiologist and top expert on plants. The professor was invited by the German artist to intermingle art and science in an experiment that transformed Palazzo Strozzi into an eccentric lab.

Höller’s solid background in science has always been an integral part of his work; the artist was a researcher in entomology with a doctorate in phytopathology. During his complex, multifaceted career, he has been interested in a different possibility of perceiving reality, often through the use of playful and destabilising machines. Famous are his slow carousels, offering uncommon perspectives of the surrounding environment, and monumental slides which he calls “devices for good moods” due to their ability to modify the states of mind of users. And also, his installations of mobile beds that allow users to sleep in unexplored conditions and complex works like Soma: where a colony of Siberian reindeer eat hallucinatory mushrooms, thus giving life to a reflection on the ancient shamanic rituals of nomadic people.

Höller considers his work unfinished until it is enjoyed and modified by the public. For the artist, a museum is no longer a static place, in which to simply display works, but a location of events and transformations, of relations and interactions of the viewer and among the viewers that completes his research. This is the case for the exhibition in Florence. Two large totally self-supporting slides dominate the courtyard of Palazzo Strozzi; a double spiral from which visitors are invited to jump holding a small bean plant next to their chest. During the descent, the state of fear, disorientation, excitement and fun experienced by the visitor is translated into a photosynthetic reaction on the part of the plant that will be analysed subsequently. At the same time, in the palazzo’s basement, twin theatres screen film snippets: in one room, comedy, while in the other, horror. Through a complex system of ducts, the air breathed by the visitors in both rooms is given off onto the façade of the building where wisteria has been planted. These plants breath the smell of human fear and joy and decide how to react to this stimulus. The building is, thus, transformed into a big science machine, a diagram that studies the complex and mainly unknown relationship between man and plants.

Read also: At the HangarBicocca, Carsten Höller adopts a series of experiences and emotions to explore our – mostly dissatisfied – expectations of things and events

Palazzo Strozzi is a symbol of the Italian Renaissance, recognised as an exceptional example of symmetry. What led you to add such an extreme form of fracture to this rigorous context?
I wanted for all of the building’s immobile elements, the fact it has been there for hundreds of years, its massive structure, its historic importance to be, in a certain sense, overturned. When you go down the slide, the palazzo seems to dance all around. It’s almost like a hallucination and, for a few seconds, that imposing colossus loses its solidity.

Dualism is also a crucial theme in this new work as well: there are two slides and two theatres. Your work has always been imbued with a sort of antagonistic relationship…
The theme of doubles is a method, a system that can be repeated to infinity. I like presenting different things, at the same time, that don’t force you to choose, because they’re both present. For example, we grow up with two parents: there’s no need to choose; when you’re born, two parents exist. Only after are we told we must choose; it’s a cultural question, not an essential one. Personally, I love living on both fronts, expressly avoiding each form of contamination. I’m rather interested in coexistence.

Professor Mancuso discusses the need for a new Copernican revolution, where man loses his dominating position with respect to other living beings to find his right place within a system of egalitarian roles.
As regards evolution, the notion of the fittest is absurd. Instead, we are dealing with the ability to adapt. As humans we’ve been successful in a relatively short amount of time, but this doesn’t mean we’ll also be successful in surviving on the Earth on an evolutionary scale of 5,000 years. Man isn’t smarter than plants; there’s no species that’s better or worse than humans; there are only different species. This is what interests me.

You’ve identified the incomprehensibility of the vegetal world as the focus of this investigation. Why?
Because it’s so much more interesting to focus on what’s beyond our scope than what we know. The functioning of vegetal organisms is unimaginably distant from our understanding.And it’s a mistaketo think that, sooner or later, with the right effort in scientific and technological research we’ll come to understand it entirely.

In this sense, can art be a better means for exploring reality?
Art places us before something we truly can’t decipher, understand or possess; but through our amazement we intuit its complexity. The same reaction provokes the observation of a being that’s so different and unknown like a plant. What it truly means to be a plant, a dog or even ourselves remains, in any event, a mystery.

Why did you choose wisteria and beans?
Wisteria is a creeper plant. It doesn’t need much tending and blooms a great deal. Beans are the most common type of lab plant. Carrying one down on a slide in your lap and protecting it for a few seconds is an experience that may leave a trace in our memory, allowing us, hopefully, to see a plant through different eyes.

The concept of doubles is so radical in your work that it has also become a lifestyle; you live in Sweden and Africa, two totally antithetical realities: hot and cold, light and dark…
In 2008, in London I made Double Club, a space divided in two, one-half in Western style and the other half in Congo style: two opposing realities coexisting without combining. My life between Sweden and Ghana is a bit like my own very personal Double Club: my double life. I went to Africa, to Benin, in 1995, then Ghana in 1998: this is where I chose to build my home, then later in Sweden, in 2000. People would ask me, perplexed, why I’d go and live in Sweden... I’d reply: because I’ve just moved to Africa! I need this dualism.

Your famous work Upside Down Mushroom Roomwas recently reinstalled in the tower of the Fondazione Prada. Mushrooms are recurrent organisms in your work and they connect with the theme of the unknown that underpins this latest project of yours in Florence…
Mushrooms represent the greatest incomprehensibility. They have a very precise shape, often in bold colours, like the Amanita muscaria, the red and white-dotted mushroom everyone knows. Some mushrooms are so psychoactive for humans while others are quite tasty or extremely toxic, but the reason for this remains totally unknown, and as far as we know, there is no explanation related to adaptation that could justify these bizarre characteristics. Maybe mushrooms can see us and we aren’t aware … It’s a total mystery. In any event, I didn’t choose mushrooms, they chose me.

In what sense?
Ask the mushrooms.