Jimmie Durham and mammals with a greater intellect

In a Zurich exhibition, American artist of Cherokee origin Jimmie Durham brings visitors face to face with animals that we in Europe have bent to our will and almost exterminated, forgetting that we are part of the same nature. 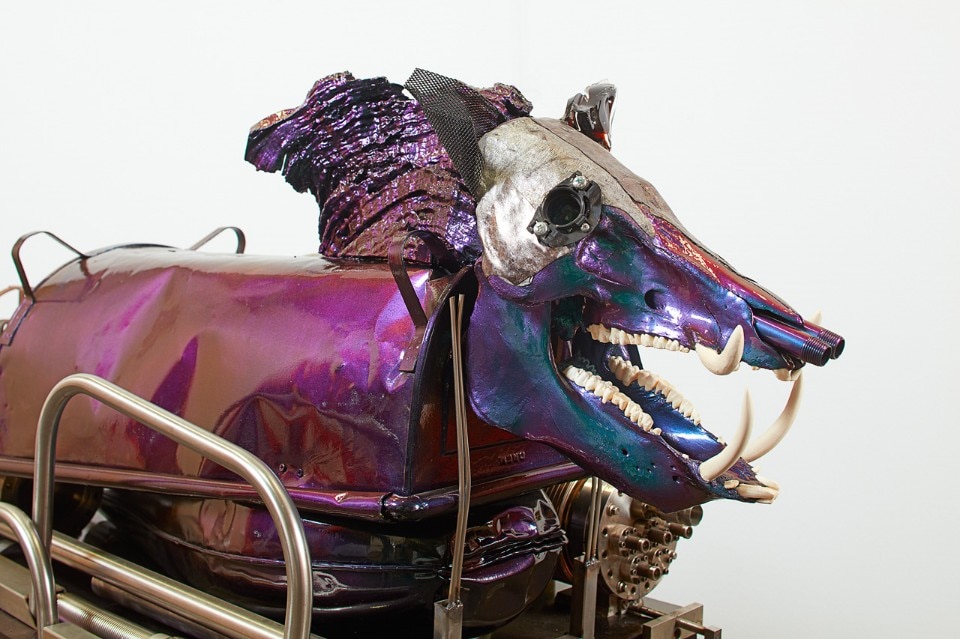 Jimmie Durham’s earliest works date from 1963 and were exhibited in his first exhibition in Houston, Texas, but any initial approach to this persona inevitably comes via his political activism. From the early 1970s until 1980, Durham was involved in the American Indian Movement and even became its representative at the United Nations.

It is impossible to forget, albeit partisan to Western thinking, that Jimmie Durham is a man of Cherokee origin first and an artist and activist second. This is why he has fought battles to win recognition of Native Americans’ rights. Nor has he ever tried to hide his commitment or his heritage which, on the contrary, have become part of his style and his discourse on art. His work features a precise and unmistakable aesthetic centred on the artistic artefacts of his native culture: wood, decorative motifs, colours, feathers and furs form part of an often extremely ironical syntax that takes these materials out their original context (that of traditional art) and places them in an alien system of meanings, as indeed is that of contemporary art.
His research explores identity and deploys a number of inevitable reflections on post-colonial theories. The fact that history is written by the winner is a now familiar concept and the United States wrote the history of Native Americans. However, if we take a step back, expand our macro-categories and adopt a broader viewpoint, we will see clearly that it is humans who have shaped and written world history in the Anthropocene era.

As Durham himself writes: “We are mammals and primates, descendants of other primates from whom we evolved only a short time ago. […] as a species, we have become more intelligent. It is certainly not easy to realise this if we only look at things through the lens of history. However, it is something that can be ascertained in historical terms if we consider the type of intelligence that is described as intellect.” This is precisely the point: the separation between culture and nature. With intellect, humans have shaped language and, in many cases, managed to bend nature to their own ends. The same has happened to the animal species that have been domesticated, hunted, become extinct or, at best, been forced to adapt to living in a radically changed and anthropised habitat.

The first floor of the Migros Museum für Gegenwartskunst in Zurich is hosting “God’s Children. God’s Poems”, Jimmie Durham’s latest exhibition project and created for the museum. Since the 1960s, Durham has cultivated a link with Europe, moving to Geneva first as a student and then returning to live there permanently in 1994. That is when the artist started exploring his surrounding context, a direction pursued also on this occasion.
Entering the room, visitors find themselves passing through a congregation of 14 European large-size semi-animals. Not new to employing animal skulls in his works, the artist has painted the carcasses and mounted them on, at times slightly shoddy, bodies-structures made of fabrics, steel, pieces of furniture (or even entire wardrobes), water pipes etc. in a constant play back and forth between nature and culture, unstoppable also when we look at the mix of materials.
The animals include: the wolf, which has suffered the consequences of systematic persecution in Central Europe since the 15th century; the ibex, the population of which was reduced by hunting to 100 in the early 19th century; the moose, also always hunted by humans; the brown bear, decimated in many areas; the lynx, a species afflicted by decades of attempts of eradication; the Maremmana bull, raised for its meat; the wild boar, which featured at length in traditional games; the Great Dane, used in hunting; the reindeer, domesticated and still used by some populations; and the horse, which has suffered a similar fate.

Wandering among these immobile beings stirs a sense of unease prompted by the stupefied gazes of the skulls, their jaws wide open and their (occasionally reconstructed) eyes staring into the void, as if these animals could not look at us. One-way observation: the humans look at the animal but not vice versa. This is an attitude implicitly present in all Western thought and one that Derrida tried to confute with his The Animal That Therefore I Am. Animals lacking the ability to look at us but equally animals that humans have always looked at, also in their figurative (starting with rock drawings) and literary renderings. Suffice to think of the immense number of myths, legends and holy writings in all cultures where animals have played a role, like the deer in the exhibition. For Durham, however, the animals are not just protagonists of human narratives but key characters in “God’s Poem” and going beyond this because, in a Europe imbued with Christianity, the artist endows these beings with souls, to the point of calling them “God’s Children”. The artist ironically and perhaps cynically reminds us that we are like them partly because of our actions towards these species (listed in the information provided to visitors): nothing more than primates capable of recognising ourselves (remembering the theories of Carl Linnaeus, cited by Agamben in his “Taxonomies”) or, as Durham says, mammals simply endowed with a greater intellect.