The show at ZKM/Center for Art and Media in Karlsruhe analyses how to approach our times when they are threatened by radical changes that alter the very essence of the environment we live in: climate  loss of control, power of images, globality. 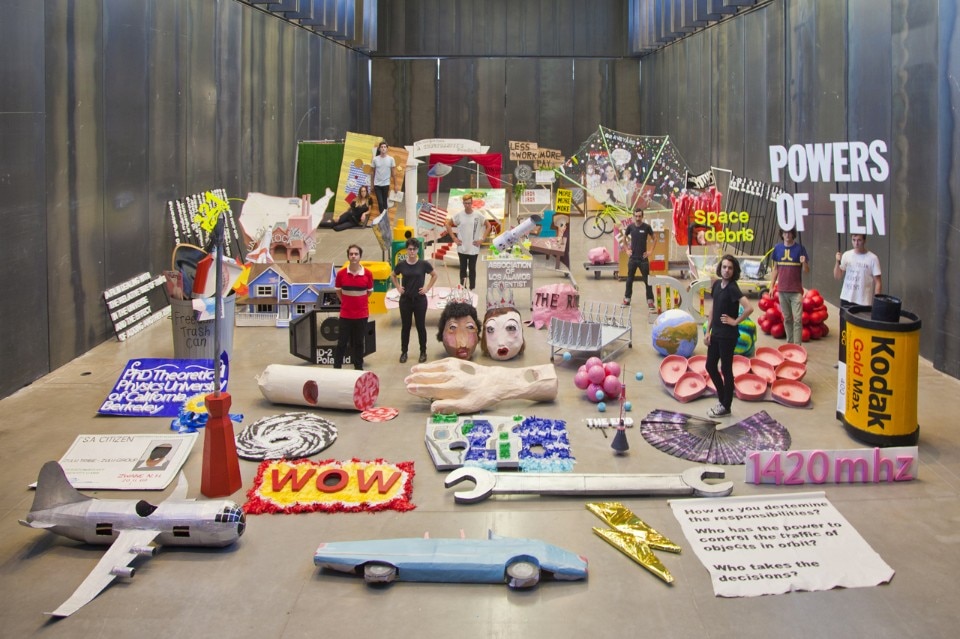 The ZKM/Center for Art and Media in Karlsruhe directed by Peter Weibel continues to delve into the folds of the contemporary world via transdisciplinary exhibition formats within the more general theoretical and operational platform called Globale.
This is an archive packed with functional elements that support a reading of today’s complex cultural and social dynamics. After “Global Activism. Art and Conflict in the 21st Century”, an exploration of the radical changes come about in both the art world and the ravaged universe of political dialect, it is the turn of “Reset Modernity!” curated by Bruno Latour, Martin Guinard-Terrin, Christophe Leclercq and Donato Ricci, it has constructed an integrated exhibition system structured with the aid of several media and communication channels that put visitors in a position to look at the works on show from different angles.

This choice was dictated by the exhibition theme: how to approach our times when they are threatened by radical changes that alter the very essence of the environment we live in. Climate is one of the sensitive areas that the curators have placed at the core of “reset Modernity!”, an issue that Bruno Latour started addressing in his cult book We Have Never Been Modern, published in 1991. In this almost prophetic reflection, the French philosopher and sociologist outlines the inadequacy of many categories of thought such as modernity and postmodernity, opening the gaze up to a hybrid reality. Nature and culture must entwine to form a universe of stratified objects requiring a collaborative gaze in which different fields of knowledge dialogue with each other if we are to grasp the more inclusive aspects of a world not organised as a hierarchy but potentially more horizontally.

The entire exhibition project is driven by this multiple and open sensitivity. As well as the works on display, a key field book provided at the entrance mirrors the audio-visual material published on the ZKM website, all linked to the hefty catalogue edited by Bruno Latour for MIT Press and making it an essential aid to grasping the countless suggestions in the exhibition.

The exhibits concentrated on the ground floor of this former munitions factory become incubator and diffusor of artistic and scientific research are, in a way, reminiscent of Stalker, Andrei Tarkovsky’s masterpiece centred on the mysterious “Zone”. A similarly threatening and suspended dimension marks an exhibition route dotted not with sections or theme areas but with six “procedures”, indicated as ways of resetting of our orientation in the global world. “… at a time of profound ecological mutation, such a compass is running in wild circles without offering much orientation anymore. This is why it is time for a reset. Let’s pause for a while, follow a procedure and search for different sensors that could allow us to recalibrate our detectors, our instruments, to feel anew where we are and where we might wish to go. No guarantee, of course: this is an experiment”.

It is with this invitation in the “field book” that we approach procedure A, “Relocalizing the global”. It repositions the notion of global and starts by focusing on the film Ray and Charles Eames made in 1977 for IBM, Powers of Ten: a Film Dealing with the Relative Size of Things in the Universe and the Effect of Adding Another Zero in which a picnic on the shore of Lake Michigan turned into a journey through the innermost meanders of the cosmos, right down to the very structure of its constituent molecules. This exploration could be considered typical of the Modernist attitude summed up so well in E. N. Rogers’s slogan “From the teaspoon to the city”.

This confidence in being able to control every possible human permutation entered crisis mode some time ago. The curators propose a reset of it via the work of Andrés Jacque and the Office for Political Innovation who restage the film by the Eames, dividing it into several acts and scenes. In the new version, they focus on economic, political and social events that do not appear in the original film, underscoring the grey areas in the Story and the lack of social criticism in the work. A video installation on several monitors by Peter Gallison and Robb Moss, Wall of Science, also interacts with the Eames by questioning our faith in science and introducing some unpredictable hitches into a scientific laboratory that add to knowledge and the results. A fascinating installation by Sarah Sze, Model for a Weather Vane conveys a sense of the disorientation caused by the global concept. An aggregation of various materials references loss and the impossibility of finding an equilibrium, expressed by a spirit level fixed off balance to slender pieces of metal indicating how precarious are our times.

The second procedure, “Without the World or Within”, suggests looking at the world from a more engaged stance. It turns the concept of spectator into a player who acts in awareness of his/her role, each time deciding whether to be inside or outside the world. This reset is illustrated via Thomas Struth’s photographic work Musée du Louvre IV, of 1989. The German photographer worked on the way visitors behave in fine art museums. We discover ourselves spectators looking at people standing before the famous Théodore Géricault painting The Raft of the Medusa. The gilded frame of the painting is not only there to focus attention but references the way we look at the world, as if through a window pane. Out of habit, we “frame” everything we see, like tourists watching a spectacle. It is through paintings that we have learnt to be subjective and become able to distance ourselves from the outside world – especially when paintings depict catastrophes.

Jeff Wall focuses on the issue of the passive spectator from a different perspective in the photographic work Adrian Walker, artist, drawing from a specimen in a laboratory. The frozen image of the artist looking at his subject with his hand raised from the canvas seems to suggest the death of a certain way of staring at an object, inviting us to place ourselves in an interrogative stance before reality, abandoning the sure paths of rational control typical of Modernism.

Procedure C, “Sharing Responsibility: Farewell to the Sublime”, is centred on the human relationship with unpredictable natural events such as earthquakes, tsunami, eruptions, etc. “Farewell to the Sublime” – which alludes to 18th-century notions, from Burke to Kant – is intensely expressed by a Tacita Dean work. The photographic polyptych Quaternary was inspired by a documentary spreading the false news of the imminent risk of a volcano eruption in Yellowstone Park so violent that it would wipe out several American states.

The fourth procedure, “From Lands to Disputed Territories”, takes an archetype to explore the Arctic ice-cap. This seemingly desolate land might, in the future, generate widespread interests in the exploitation of its resources.

An extremely interesting work presented by the Italian Folder collective is entitled Italian Limes. This multimedia installation asks questions about boundaries between two places, especially when this frontier falls in an Alpine area that is melting fast because of global warming, placing the entire ecosystem at risk. A mobile frontier undermines cartographic certainties by changing the very concept of limit or boundary.

The penultimate procedure in resetting is called “Secular at Last!” and is a monumental video-installation by Jean Michel Frodon and Agnès De Victor. Religious Films Are Always Political assembles excerpts from films with a religious backdrop, such as Andrej Rublev by Tarkovsky, The Gospel According to Matthew by Pasolini and We Have a Pope by Moretti, and invites spectators to reflect on how important images are to a rethinking of the world.

The last procedure “Innovation not Hype” looks at the issue of transformation and Thomas Thwaites’ heroic Toaster Project ends the exploration of this indeterminate but necessary zone of reflection on our times from different and transdisciplinary angles.