The recent exhibition “Spending Quality Time With My Quantified Self” in Rotterdam offered the chance for reflecting on the contribution of technology to our hyper-connected bodies. 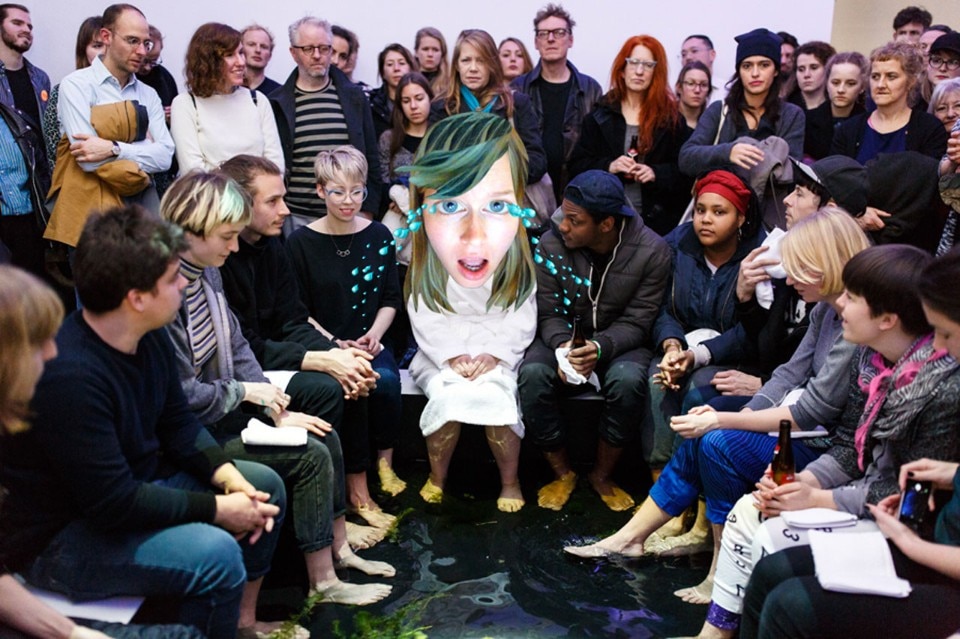 Like all Internet-era formulas, “quantified self” also has quite a blurry definition. The practice it refers to – the observation of bodily processes via sensors and wearable gadgets – dates back to the 70s, while the current phrasing was apparently coined by Gary Wolf and Kevin Kelly in 2007.

The two Wired editors targeted the growing interest of users and companies in those emerging technologies that allow a deeper, more immediate knowledge of one’s own body, with clear benefits in terms of self-improvement and disease prevention. Be it a commercial trend or a movement (a word used by its theorists), it’s undeniable the Silicon Valley’s signature positivist ethos has trickled down into our everyday, from pedometers and apps like Runtastic to the Apple Watch and 23andme, the service offering an easy reading of our genome (founded by Anne Wojcicki, ex wife of Google’s Sergey Brin).

That is the premise to “Spending Quality Time With My Quantified Self”, a group show curated by Niekolaas Johannes Lekkerkerk and Jesse van Oosten, hosted by TENT Rotterdam between February and April 2016. The international roster of artists occupying the gallery space deals with the double-edged contribution of technology to our hyper-connected bodies. While the opportunities to quantify and better our performance as human beings have multiplied, on the other hand such a techno-individualistic acceleration ushers in a whole new level of stress and alienation.

The display is marked by a relaxed, intimist atmosphere from the very entrance. We're welcomed by Attention Spa, an installation by the Finnish Anni Puolakka and Jenna Sutela that comprises a minimalist pool, set up right at the center of a room lit in pastel hues – an opening performance had the artists dipping their feet in, along with a circle of visitors. The familiar palette is a subtle reminder to the Pantone aesthetic we'Il encounter elsewhere in the exhibition, while the introspective relaxation suggested by the pool itself gains strength courtesy of two other pieces we see through the door: Text to Speech, by Anna Zett, and When You Moved, by the very same Sutela. The former consists in a pair of hanging headphones and a single stool, both embraced by a shower curtain. The audio is a text by the artist reflecting on the standardized use of robot-American English in the art world, as a voice of capitalism itself and a sign of alienation from one's body. The latter comprises three loungers immersed in the viewing of a screen, encased within a suspended mini-cinema. The video shows a woman narrating sci-fi scenarios of humanity's future, involving asteroids, while running on a tapis roulant.

As it appears from these pieces, the show is effectively set up to seduce visitors with sensual surfaces, hues and transparencies, but only to unexpectedly interrogate them on the incommensurable once they get close. Two more examples of that are the aesthetically conflicting artworks by Kate Cooper and Maki Ueda. The former presents Experiments in Absorption, a 3-screen video-sculpture simulating the contact between very physical materials – a body, water, smoke – through neo-baroque 3D graphics. The Japanese artists's work – Deconstructing Body Odeur (and Reconstructing) – instead isolates the body in the form of sweat. Kept in suspended containers that stand orderly aligned, despite the non-quantifiable sensoriality of their content, the collection suggests a humanity made impenetrable by minimal design.

Other pieces are more discursive and articulated. Revitalise, by Alexandra Navratil, is a video-reflection upon the impact of ergonomics and thermodynamic regulations on the performance of the human body in work environments. TLTRNW (Too Long To Read And Write) by Amy Suo Wu investigates the relationship between language, identity and technology through videos and wall prints that illustrate the discrepancy between acronyms and facial expressions.

The most aggressive works (aesthetics- or implication-wise) are conveniently arranged in strategic spots, slightly off the lime light. Screened in its own room, for example, the 3-channel video installation Highway, by Momu & No Es, is a hallucinatory trip on an immaterial road made of gifs, stock images and other Internet pop culture memorabilia, with a catchy party song as a background. Discretely sitting behind a corner, instead, Miloš Trakilovićs Nothing Really Matters is the darkest piece on show: four bright pink yoga mattes are aligned in front of as many posters on which, with a Mac desktop background, you can read instructions describing how to carry bodies in a war zone. In this case the perspective of personal optimization is juxtaposed to the banalization of an often brutal reality.

Lekkerkerk e Van Oosten's exhibition is balanced in its content and consistent with its premises, a successful mix of post-internet aesthetic and post-human critique. Unlike other cases of shows preoccupied with tech aesthetics, in fact, the TENT one expresses the richness of the topics it deals with in a subtle way, which makes it readable on multiple levels.