Art re-programmed: an open manifesto is a research-action project that examines the introduction into the artistic sphere of methods and approaches related to open-source software and hardware and open design. It's on view at the Centre Pasqu’Art at Biel-Bienne until June 14th. 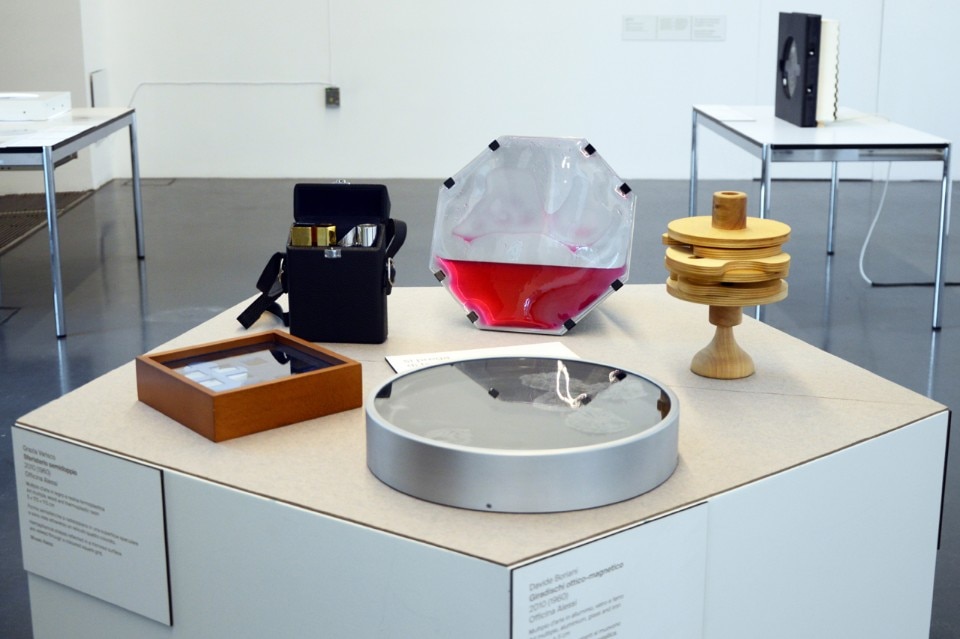 Once upon a time, in the impassioned Milan of the late 1950s, Gruppo T (as in “time”) was born; those same years in which Lucio Fontana kept Piero Manzoni and other young artists, galleries like Pater, Apollinaire and Azimut displayed the new passions and Umberto Eco worked at Rai, (even programming the questions for Lascia o Raddoppia, that by no coincidence saw John Cage among its competitors). The group’s leading lights were Giovanni Anceschi, Davide Boriani, Gianni Colombo, Gabriele Devecchi and Grazia Varisco. Their first significant event was Myriorama, a term meaning “a thousand things to see”, suggesting excitement contrary to the suffering contemplation touted by informal art.
Italy was turning over a new leaf also thanks to pioneering companies such as Olivetti, who not by chance hosted the exhibition “Programmed Art” curated by Bruno Munari in their Milan store. There were some who railed against the “motors” that made the playful, impersonal works move, centred on a meeting with technology. The leaflet for the exhibition, with words by Eco, was both modest and revolutionary. Gruppo T were not alone; many others arose during that time including the French GRAV and N from Padova, founded on the idea that the excessive emphasis on the person-subject should be removed from the notion of author and that ideas could be born, also in the field of art, out of collective thinking and working. Another fundamental prerequisite was that a work was not something closed, complete, stable but envisaged interaction from the public and change over time.

Key words that soon passed under the steamroller of American Pop, centred on the action of the media rather than interaction with it.

Today though, media is interactive. It can no longer function without moving back and forth with the public, the protagonist and often the director. McLuhan predicted something like the web, or rather a world of communication in which action would be marked by a reciprocal motion of transceivance. Now that we are always on, we can no longer imagine being simply overwhelmed by a Marilyn that we cannot change.

This underground river, that brings back to the surface old and high-spirited ideas, is behind the project Re-Programmed Art: an open manifesto. Coordinated by Serena Cangiano and Davide Fornari, in collaboration with Azalea Seratoni, it is sponsored by the University of Applied Sciences and Arts of Southern Switzerland together with a number of other supporting organisations. It has given rise to a recent book published by Johan & Levi in which the prerequisites are clarified of an interest that has not only been revived but updated in line with all current technological platforms.
In the background lies the growth of relational aesthetics that characterised the 1990s, often involving simple but effective technical devices (from Olafur Eliasson to Tomas Saraceno, via the theories of Nicolas Bourriaud), but also the development of prototyping platforms like Arduino, born in the studies of digital culture at Ivrea and now spread across the world and a mindset in which copyright is not safeguarded in an imperative fashion, frequently expressed as Creative Commons, or in which everyone can make things designed by others themselves and add their own personal contribution. There is no longer just making but a mindset that leads to WeMake (that is, by no coincidence, also the name of a collective subject).

The point is not, therefore, to bring back and highlight works created in the past, that have in any case enjoyed renewed visibility in exhibitions like “Arte Moltiplicata” at the Prada Foundation in Venice. There is no need to give a fetish-like character to something that was produced in the 1950s and 1960s. Instead we see a need to give them a historic interpretation that updates them and brings them to light in the way they deserve, not through re-enactments or commercial quotations but by putting them together with things that depend on them: current activity that is based on the same rallying cries as those of the past: space-time, becoming, relating, variation, participation.

The work becomes again, as Eco wrote in his time, “a field of possibility” as indeed was already clear in a thread that connects the presence of time, chance, participation of the spectator in Marcel Duchamp’s Large Glass, Alexander Calder’s Mobiles, in the works that interconnect light and movement by Lazlo Moholy-Nagy and Naum Gabo, in the perceptive provocations of Bruno Munari and Victor Vasarely. We could also add all that which, already in 1955, formed the basis of the small but glorious exhibition Le Mouvement curated by Pontus Hulten at the Denise Rene gallery in Paris. What is more, how much theatre, from Peter Brook to the Fura dels Baus, how much music, from Cage to all of Fluxus, how much performance technological and otherwise, with Nam June Paik at the forefront, has taken and developed these premises?

One might think that it will still be difficult to resist the myth of the artist-hero, whose romantic substrate is supported by precise market demands but we should know by now: there are two roads along which art and contemporary culture venture, one is distinguished by an economy of sponsors and non-profit-making support, the other made for a market that to make money needs concepts like the expression of a subject, uniqueness or rarity of work, the object as a fetish.

The two roads can coexist. This is why a manifesto for a new programmed art makes sense, in which the term has taken on a significance linked to the potential of crossing computers and telephones; a declaration of intent that sees its main principle to be participation that seeks, indicates, wants a democracy of the mark and a direction imbued with the social. Just like you could imagine it today.