Art beacon in the Mediterranean

The open-air gallery of Mangiabarche is a conceptual exercise in contemporary art-making that proves the latent potential of the Mediterranean territory as a fertile ground for exchange and collaboration. 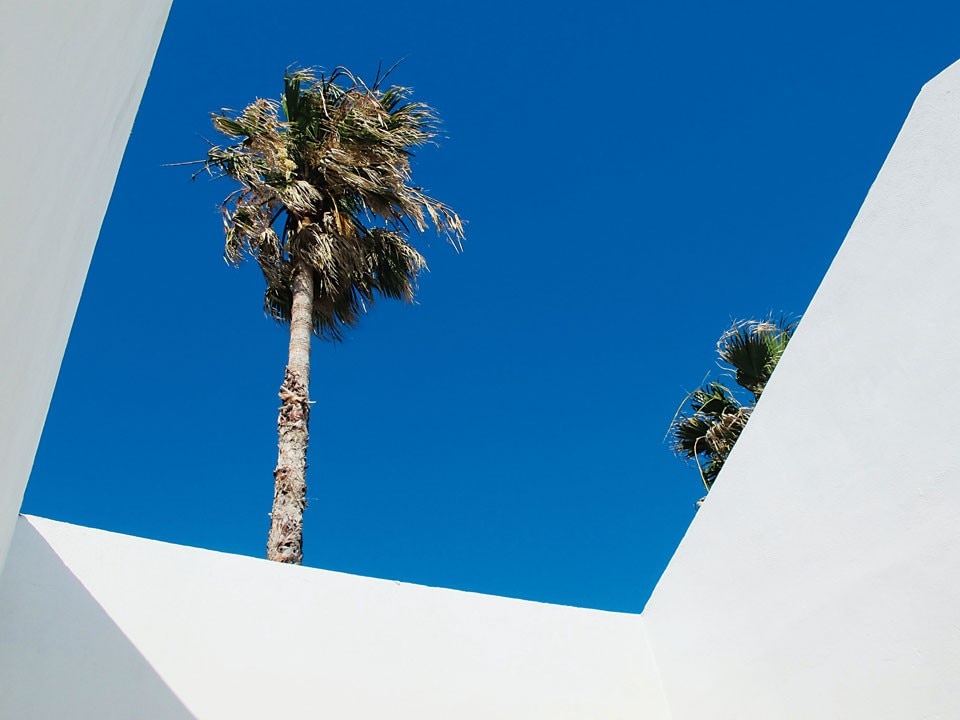 This article was originally published in Domus 967 / March 2013

The best way to approach the open-air gallery of Mangiabarche, on the tiny island of Sant’Antioco off the southwestern tip of Sardinia, is on foot. The asphalt turns into a dirt road a few kilometres before arrival, and hits a patch of volcanic rocks that, from the juniper shrubs, extends into the sea, where the lighthouse of Mangiabarche surveys the horizon. Nearby, an old watchtower and a former World War II bunker hint at the area’s military past. Once you see them, other structures also become apparent — old warehouses and former barracks, all emulating the muted colours of the surrounding vegetation. The harsh light seems to accentuate the contrasts between the few colours around, and suddenly one’s eyes are drawn to some glaring white edges emerging from the bushes further ahead. Approaching them, one is confronted by a blindingly bleached volume with no roof, no windows and no doors, its sharp, angular contours rendered alien by these missing architectural elements. A gravel path leads to its interior, where a large white room opens up to the blue sky. Three other smaller rooms follow, all with different tiled floors and some with the remnants of previous layers of paint: blue, green, grey. Above, the sky is starkly framed against the building’s whiteness, as if James Turrell had landed in Sardinia.

In French historian Fernand Braudel’s seminal volume La Méditerranée, he remarks how the entire Mediterranean shares a collective history, featuring the same geographical and geological characteristics, enhanced by trade, conflict and migration over the years. The sea acts as a connector between all human settlements around it, but the nature and geography — hostile, volcanic and temperamental — define the people and places surrounding the sea. “Here, everything had to be built from scratch, often more painstakingly than elsewhere,” Braudel remarks, defining what has been a geographic — and political — space of resistance for centuries. In Mangiabarche, Braudel’s Mediterranean comes to life. Massive red volcanic rocks plunge into a crystalline sea that changes colour and mood every few hours; shrubs of juniper and myrtle stand still, as if they had been rooted there for centuries; the sky turns from bright to threatening in seconds. This is a ruthless, defiant territory.

Two hundred metres from the coastline, the same energy exudes from the white walls of the Mangiabarche Gallery. Originating from a collaboration between the spatial production agency Beyond Entropy and the Coastal Conservation Agency of Sardinia, the project is part of a larger concept — a Mediterranean Kunsthalle of sorts — that encompasses both the gallery and the Calasetta Museum of Contemporary Art, located five kilometres away in the small town of Calasetta. Both institutions are connected under the umbrella of the recently created Fondazione MACC, and seek to bring contemporary art — through artist residencies, installations and exhibitions — to this corner of the Mediterranean.

In this context, the Mangiabarche Gallery is what project initiator and director Stefano Rabolli Pansera calls “a special place”, with a curatorial programme that subverts the white-cube gallery concept. The architectural intervention, adapting a former military canteen, has been minimal. “The roof has simply been removed,” he states. “Everything else remains the same, but now everything is different.” The gallery aims to accommodate interventions by contemporary artists that, instead of being temporary, invade the gallery and remain there, exposed to the elements and subject to any unpredictable occurrences.

For the gallery’s full-house opening in November 2012, Rabolli Pansera curated Variable Length, a one-night-only event that combined an experimental musical performance under an awe-inspiring night sky and a discreet manifestation of fireworks drawing a luminous outline of the space, produced by Cagliari-based pyrotechnics expert Antonio Collà — whose previous projects include the 2012 London Olympics. The next morning revealed a series of coal marks, dark remnants delineating a path on the walls of the main room, and the first layer of a perennial palimpsest. Last January, Cagliari-based artist Marco Lampis placed several mirrors inside the gallery, bringing the neighbouring palm trees into the main room. Future projects are in the pipeline.

Ultimately, Rabolli Pansera has the larger goal of turning Mangiabarche into “an epicentre for cultural and artistic production for the whole Mediterranean region”. For him, Sardinia embodies the many contradictions that can be observed throughout the Mediterranean, from Spain to Lebanon. These are mostly expressed by an aggressive seasonal territorial occupation — overcrowded in the summer and depopulated in the winter — and the sharp contrast between vast natural reserves and tourist infrastructure. With this Mediterranean Kunsthalle project, Rabolli Pansera strives to envision a future for this geopolitical territory beyond the current dialectic.

His ambitious project is not unfounded. Beyond Entropy has identified a territory with immense potential by mapping and identifying the more than 1,000 cultural institutions that border the Mediterranean, all of them no further than  2 kilometres from the coast. Such verification begs the question: could this sea become a connector once again? Could a new, alternative network of collaborations and exchanges emerge? The political and economic turmoil of recent years in Northern Africa and Southern Europe speaks of a bleak future for such institutions, particularly in terms of financial sustainability. And for nascent projects such as the Mangiabarche Gallery, the greatest challenge is to attract and maintain an audience, without conniving to create simply another venue for artistic tourism.

A few indicators suggest that such an audience could effectively be established, and a project like the Mediterranean Kunsthalle might indeed thrive. For example, new low-cost air routes have recently been announced, promising to link nearby Cagliari Airport to the artistic hubs of Vilnius and Berlin. Further north, Alghero Airport opens the way to London.

Simultaneously, Rabolli Pansera continues to strengthen and adapt his curatorial programme. His latest initiative is a “civic epic” where young artists in residence bring art into the lives — and houses — of the inhabitants of Sant’Antioco, setting up an exchange between the population and the artists. Then, of course, there is the centuries-old history of Mangiabarche, Sardinia and the Mediterranean. The geopolitical territory of resistance so eloquently described by Fernand Braudel in his magnum opus conspires to give a place such as the open-air gallery of Mangiabarche — and with it the many cultural institutions that surround this sea — the possibility of success in an undoubtedly strenuous process, which will nevertheless be a “slow, precise and magnificent conquest”. Vera Sacchetti (@verasacchetti), design writer and critic