Mario Cucinella and the provocative Bosco San Petronio: “a new friendship with the environment”.

A conversation with the Italian architect about  the work with the Vatican, his humanistic vision for dealing with the environmental emergency and, obviously, the latest ironic proposal for Bologna’s unfinished building. 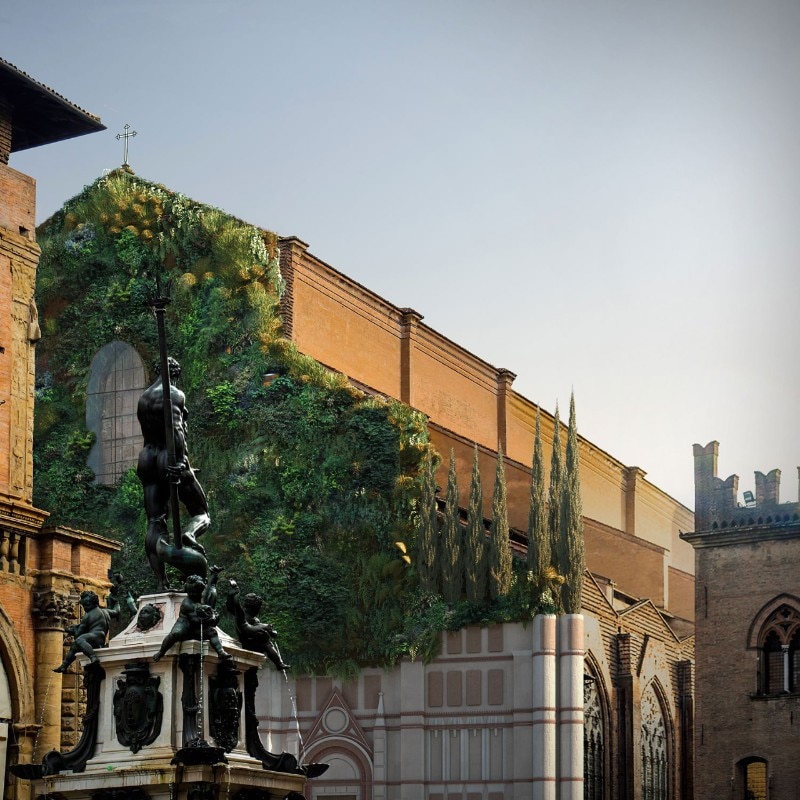 Last week, architect Mario Cucinella’s firm presented its proposal for the completion of San Petronio’s facade, the iconic Bolognese basilica that dominates the perspective of the city’s Piazza Maggiore. Despite the lively exchange of comments on the images, the studio’s idea is anything but design-oriented. The insertion in fact of trees and shrubs on the upper part of the church's main front is a provocation to wake up Bologna’s people (and not only) from their slumber.

The images of your proposal for the facade of San Petronio have created a strong debate, between positive and negative opinions.
It all stemmed from Bologna’s long history in recent years of unfinished or unrealized works, talking for example about Ricardo Bofill’s station proposal or Renzo Piano’s auditorium. Ahead of us, we have a very important ten-year program, also on the environmental front with the Paris Agreement COP 21. I don’t yet see the ferment of these plans to relaunch the city of Bologna. And so I saw in the unfinished building an issue to be discussed again, and perhaps the original sin of this attitude comes precisely from this unfinished monument from 1200. Certainly, for San Petronio there have been competitions and projects over the centuries, such as that of Palladio, but perhaps today, if you had to deal with the ancient, this is the Italian drama, the relationship between the ancient and the contemporary, you would not do it as Palladio would have done. Perhaps the message to be launched in the contemporary world can be that of the bond with nature and the new friendship that we must find with the environment. Clearly, our proposal is a provocation to wake the city up a bit from the Bolognese dream.

What are you working on for the Vatican Commission for Covid-19 wanted by Pope Francis?
For the Vatican, we are working in both the post-Covid and ecology commissions: the theme is to transform the words of Laudato si' – Pope Francis' second encyclical letter dated 2015 – into concrete action. That facade was made to provoke and bring attention to a scorching topic. On January 1, it will have been five years since the Paris Agreement, in which for the first time in 25 years of United Actions climate change meetings, governors had made a political, and not even too technical, commitment. We had these five years to prepare, but what actions is the government taking? My intention has been to urge the need for projects and planning.

Between the pandemic and the climate crisis, we face a long list of challenges. So what is the role of the architect today?
Be concrete. The ambiguity of this challenge to the environment, for example, is that we only talk about performance. But this is a technical fact, which does not produce beauty, nor does it allow us to create a new architectural language on sustainability. We arrive at a true technological revolution with a humanistic vision, putting together knowledge without necessarily becoming poets of sustainability. It’s a matter of doing a ‘truth’ operation, without telling lies. Now we all declare ourselves to be in favor of sustainability, but then the buildings we find are all glass. So we should have the courage to tell ourselves what is the state of the art today and look ahead.

You often talk about ancient architecture, such as the anecdote of Marco Polo's journey to Persia. So how come you are not nostalgic in your architectural language?
I don't want to go back to what happened in the 90s, like Léon Krier's followers who wanted to rebuild the Roman city. But I do look at the past with curiosity. Before the industrial revolution, we built wonderful things, territories, palaces. It means that in that millenary journey that lies behind us, there is hidden knowledge that we must reacquire to re-learn to work in empathy with the climate, and not only that. This, however, does not mean that we have to work like the ancients, because we have a huge advantage: we can look at history for what it can teach us and exploit technology at the same time. This, to me, is a relationship mechanism that could open up wonderful scenarios.

For example, I have a passion for plants that is not from childhood but is much more reticent, after a meeting I had with Stefano Mancuso. What does a plant have in common with a building? That in principle, a plant, like a building, does not move. Over millions of years, vegetation has developed an extraordinary system of adaptation to the climate. How does a tree know it's spring or knows it's supposed to bloom? The world of botany could teach us a lot. So drawing a little bit from history, a little bit from the plant world, we have a lot of knowledge, so we don't have to produce anything new, it's an adventure of knowledge.

Do you think we will be led to reconsider the scale of values and hierarchies in design, starting from more expressive and aesthetic points of view?
If I see what there was before, architecture was a system, because it responded to a series of climatic, cultural and economic conditions. It has always reacted by expressing itself in different ways. In the last decades, it has expressed itself only in financial aspects. We have to start thinking again that the project needs more time and research because if on the one hand, we have the ambition to become ecological, to remove pollution, on the other hand, we still have old tools. But there is also a generation that is growing up and has understood these themes. When we did the Italian Pavilion, for example, I met many young architects who wanted to stay in their own countries; there is a lot of motivation to work on places that until now have been left on the margins of the debate.

What are your sources of formal and constructive inspiration?
I look at the landscape a lot; it is a great source of inspiration precisely because of the multitude of messages it sends us. I am also intrigued by the past architecture because there is a lot of hidden innovation. I'm curious to fish from the source rather than look at my neighbour's architecture, which is already filtered by other thoughts.
We in the studio have, for example, a research and development department. We are working with this idea of producing new materials, without going through the industrial production system. And that's where an exciting scenario opens up because the world of nature is a great form of inspiration for how it behaves and adapts. The inspiration source is much more beautiful when it is primitive: a bit like how, in the 20th century, modern expression art then looked at African painting.

At the moment, the architectural debate on the themes of ecology and sustainability is stuck on an anthropocentric point of view: we talk about how a man will live, of climate refugees. What do you think about more speculative visions brought forward, for example by Andrea Branzi or by the Broken Nature exhibition (Triennale di Milano, 2019), of an intra-species urbanism?
I believe that our commitment as architects is the sustainability of buildings as a goal and the sustainability of life in its forms, so in constructing buildings or cities, we must not only look at the lives of humans but everything around us. The era that awaits us is not only the ecological one, but it is a bit of an era of the biosphere, of the life that is around us. Urbanists have never worked with this relationship between nature and animals in mind. And we've seen instead in the last few months when we've stopped for a moment, how much nature has responded in terms of its presence. We have rediscovered the plants, the sky and the stars. For example, we could start from the reconnection between the city and the countryside and rebuild this bond that I simply called a new friendship with the planet. We should not be hostile; we should be more friendly.