An ancient Murano factory, closed in the Nineties, is returned to the city thanks to a project that empties industrial interior to turn them into residences, weaving the island’s densely built urban space with the industral dimension. 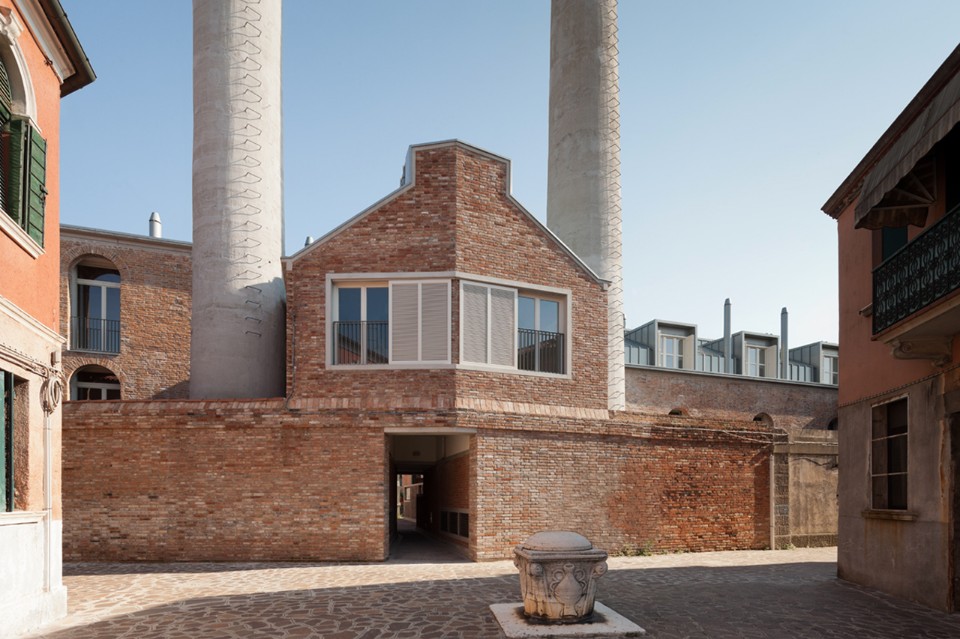 The project is part of a plan to revitalise a former industrial site, the Conterie (small beads), on the island of Murano, Venice.
The Conterie were a two-hectare-wide industrial complex located in the heart of Murano. Brought into being between the end of the 18th century and the first half of 19th century, the Conterie’s zenith dates to the second half of the 19th century, when the complex achieved its maximum industrial output. Decline, on the other hand, kicked in in the 1970s, and the factory was finally closed down in 1993. Two years later the complex was acquired by the Municipality of Venice. This decision was taken because the former industrial site was deemed to offer significant urban development opportunities on account of its extent, location and the variety of building which makes it up. Many of the latter were in a particularly poor state of conservation.

Having lost its original function in the late 20th century, the Conterie became a fenced-off area, a kind of “enclosure”, the very size of which stood in sharp contrast with the densely built urban space that surrounds it. The tension between the two areas is embodied by the thick wall that encircles the Conterie, making the former industrial complex utterly inaccessible and preventing any kind of exchange between it and neighbouring parts of the island. The regeneration programme launched by the Venice Municipality aims to rectify this situation. Its objective is to renovate the Conterie’s industrial buildings by assigning them new functions from which both the island of Murano and the city of Venice as a whole will benefit. Central elements of this “re-integration” programme are the building of one hotel, two residential complexes, as well as handicraft and commercial spaces. The inauguration of new public routes will also contribute to turning the area into an open space, well harmonized with its context.

The new residential complexes are built inside the disused factory, parts of which are to be preserved. The project for the residential units speaks to the area’s existing urban fabric. The units comprised in the first building are shaped by the former factory’s north-facing facade, which the apartments adjoin and whose original windows they respect. The juxtaposition of two duplex units and three simplex units brings about a comb-shaped structure which provides ample sunlight from the south, thereby granting the bathrooms both natural light and ventilation. Such a structure means that the distance between the facade of the first building and that of the second one vary, generating a sequence of urban spaces.

According to the renovation plans, the second volume­, whose project is currently being prepared, will be built inside the existing industrial complex, which has been duly “emptied”. The new building is made up of two blocks (each of which comprises eight residential units and one commercial area). It will also make room for the realization of an indoor square, which will become the centre of the new development.