In Berlin an exhibition recounts the work by the Austrian group founded in 1967, that can still be traced today in the profiles of numerous architects and artists. 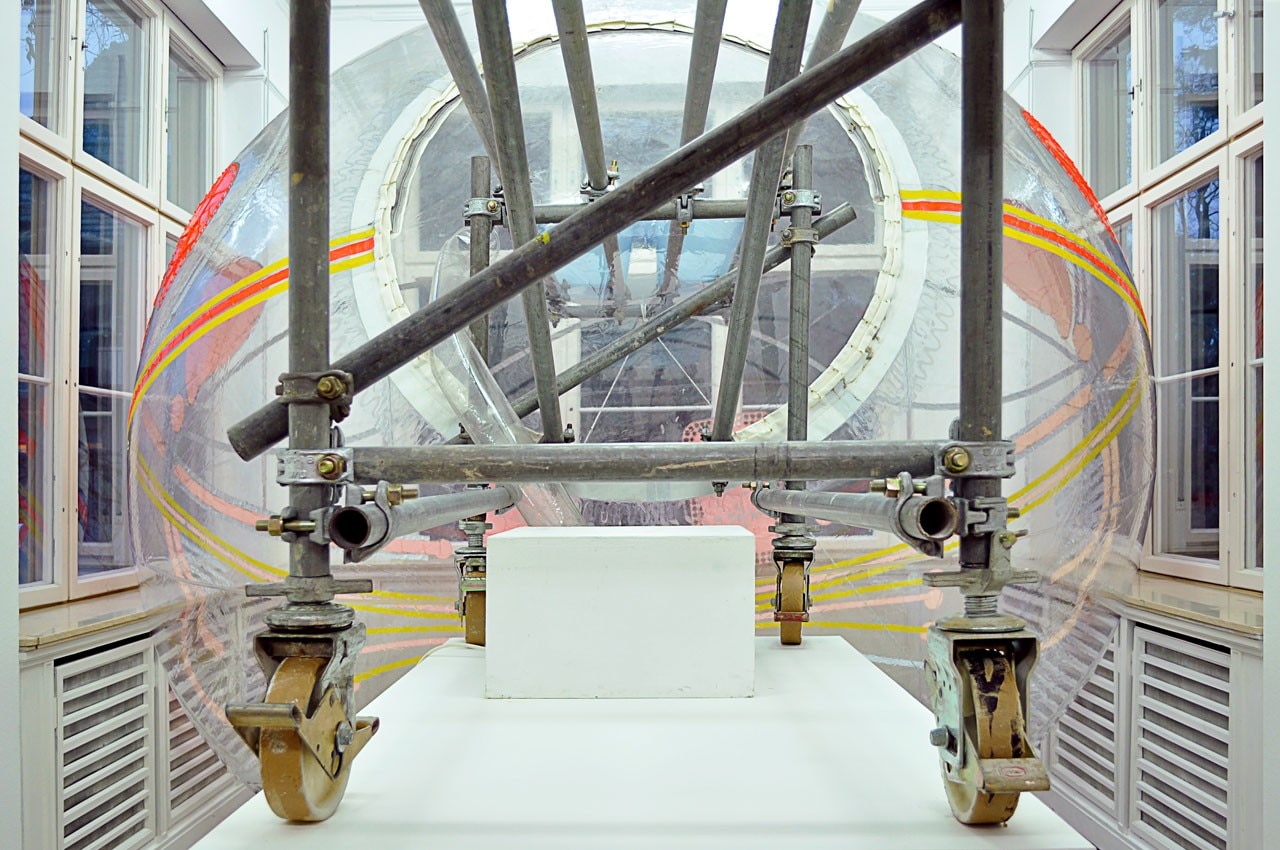 Despite the leafy quietness of the Zehlendorf zone, where the U3 underground line ends, the exhibition curated by Günter Zamp Kelp in person, with Katja Blomberg and Ludwig Engel, seeks to recreate the noisy and reactive circumstances of the Viennese group Haus-Rucker-Co.

Temporary, performative and subtle, but with the potency of an external force, different to that of humanity, Haus-Rucker-Co bursts onto the polluted and overcrowded scenarios of industrialised civilisation, in order to provide new tools to a humankind responsible for its evident decline.

In those years, the context in question was among the first to undergo the influence of a conscience dedicated to protecting the environment.

And, in that light, a few utopias would appear to have been realised, while expanding the classic methods of communication and the canonical meanings of  perception. Space loses definitions to the detriment of cartesian plans; architecture turns plastic and, no longer needing cement, adjusts its weight to the sinuosity of the human body in space and at different times. Design regenerates its figures to take its place at the centre of experiments on form with the “membrane”, a new gauge of construction that combines to upset the founding values of the moral codes of everyday habitation.
The first attempts to subvert urban paradigms were substantiated in Vienna, where in 1967 Günter Kelp Zamp and Laurids Ortner completed their architectural studies and began working on various projects, in collaboration with the painter Klaus Pinter and, subsequently, also with Carol Michaels and Manfred Ortner, under the name Haus-Rucker-Co. Already literally embodied in that name was the action of moving, and above all, of moving forward. The aim was to overtake what had been constructed in order to deal with its interstices, and with places not yet addicted to any type of rule.

Their examples staged paradoxical cinematographic expedients that specified more extensively what kind of future might be sought. Ballon für Zwei (“Balloon for Two”, 1967) debutted in fact, from the window of a Viennese flat dating from before World War I. A sphere inflated with air made it possible to sit on a void, thereby revolutionising, with two seats inside and suspended from a building, the relation between private and public space, now in a reciprocal, continuous and unproven exchange.

The means, with which space is given to new meanings, assume responsibility for having to move  categorically away from the ordinary, by mingling colours and utilizing air generators and clearly rendering proposals disconnected from a present to which they do not belong.

Man’s house can no longer remain the same, and will have to readapt to the dearth of spaces diminished as a result of overcrowding in some places already an uncontrollable issue. “Nature”, wrote Kant […] “obliges us to consider hospitality as the supreme precept which all of us must sooner or later embrace to an equal degree, just as we must seek a solution to the long chain of trials and inexactitudes, to the catastophes which our errors have brought about, to the ruins which these catastophes have left in their wake […]”

Attention to habitat is pivotal to the concepts expressed in all of the work done by the HRC group. Indeed their space always defines limits in which it is possible to exist, as an essential condition of the pneumatic architecture designed by the Viennese group, or of any setting, shown on a front to hide a back.

No sooner had the office been opened in Vienna than it moved, first to Dusseldorf and later to New York, where, in keeping with its surveys of Urban Toys and their effect on the land, it displayed the idea whereby architectural design cannot but envisage characteristics indivisible from what the public wants, which will then utilize that architecture. And so it must be able to explore and enjoy processes of transformation through interaction. A large cake, portraying the New York metropolis and its grid of blocks, celebrated open participation by staying aloof from the institutions, such as that of the museum, and referring to the necessity to change levels of perception.

The perspectives for the future of other cultural landscapes, shown at the Haus am Waldsee, examine the years exhibited, from 1967 to 1977, in the principal sections in which this story of radical architecture can be told: the mind-expansion programme, pneumatic architecture, and constructions in the city’s space.
Derived from the “hallucinogenic” structures are the projects shown in the documents and in the original prototypes; Mind-Expander 2, the second of two models from 1967 to 1969 on the occasion of an international competition, is proof of the enrichment of their spatial experiences compared to those exercised by an ordinarily operating conscience. The plastic clothes with prints, like Electic Skin 1 (1968), or the pneumatic structures, Connexion Skin (1967), coexist within an experimental programme of perceptive distortion shared with other individuals, and the projection of the documentary Yellow Heart (1968) portrays its use, by shooting the scenes on a set reconstructed in a Vienna police station.
The city, as a living and mutating body, changes with each new work, through the reorganisation of fabrics and fluxes interacting with urban figures: avoiding, invading and intersecting them. The projects by HRC project some of its devices onto the scale of the city and their effects are prefigured using the traditional methods of representation by sections or plans, intersected with models and prototypes to render the three-dimensional proportion between spaces. The construction materials are visible in their joints and create grid structures better suited to a theatrical backdrop than to a traditionally conceived building, and are elevated to a diversified point of view in the exercises of fruition but ductile in terms of placement: Rahmenbau (1977) – Frame – among the landscapes of Kassel, Sonnenuntergang am Matterhorn – Sunset on the Matterhorn - (1974) reproduced as a stage set for an exhibition, Big Piano (1972) in New York’s Central Park, in which a cloud can be reached by climbing a ladder, as happened with Mind-Expander but on an urban scale.

Details of the solutions mentioned were developed in an atmosphere of fear of an environment revealed as fragile and which was beginning to alarm its inhabitants regarding the harmful actions of its industrial and residential activities. In a scenario made up of fearsome images, such as cataclysms and all manner of pollution, man puts all his trust in technology, the new reparative and optimistic religion, while restructuring his civilisation which cannot do without its habits, as reflected in the video-installation Place to Passage (2003) by Hussein Chalayan, a contributor to the exhibition.

Contemporaneity has not abandoned the instability tackled by the radical architecture of the Sixties and Seventies. For that reason it shares the hopes cherished in that period, translating them into the most realistic and feasible elaborations for the purpose of rectifying the weakened global balance.

The Haus-Rucker-Co group split permanently in 1992, but the reverberations of their works can be traced in the profiles of numerous architects, artists and authors who relate their own work to visions of utopia against a social background. Orbit (2013) by Tomás Saraceno, present in one of the rooms next to Giant Billiard (1970), plasticizes space in order to liberate man from the restraints of gravity; the job of the artwork is to re-estabish an opening onto the world, in a reference to Martin Heidegger. But it is also the dream of humankind which has always endeavoured to surpass itself in a struggle for evolution.