Thorsten Sahlmann explains the essence of the latest parisian project by Renzo Piano: the Fondation Jerôme Seydoux-Pathé, that will house office space, archives, a record and research centre, exhibition spaces and a screening room for the historical film company. 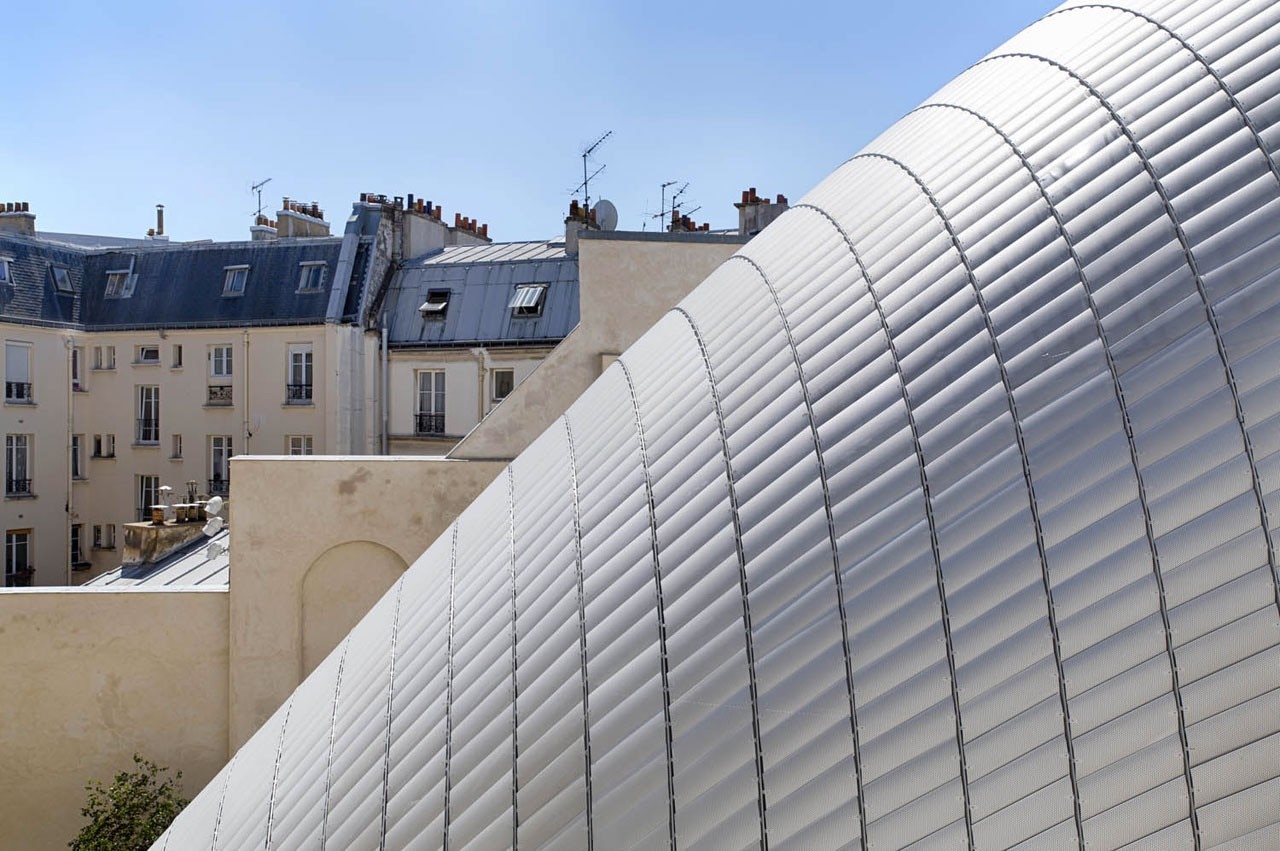 The Fondation Jerôme Seydoux-Pathé is Renzo Piano Building Workshop’s latest project in Paris and nearing completion. Its function is to promote cinematography and preserve the collection of Pathé, the celebrated film company founded in 1896.

The Foundation is on Avenue des Gobelins in the XIII arrondissement, just a stone’s throw from Place d’Italie, on a site first occupied by the Théâtre des Gobelins in the late 19th century. Converted to the renowned Cinema Rodin in 1934 and then radically revamped to become a multi-screen cinema in the 1990s, this new design is the final stage in its metamorphosis and will house approximately 2,200 m² of office space, Pathé archives, a record and research centre, exhibition spaces and a screening room.

Thorsten Sahlmann of RPBW took us on a tour of the works and explained the essence of the design.

Salvator-John A. Liotta: Concept and context are two design essentials. Over past years, there has been a growing interest for works that dialogue with the context, after listening to what is already there for signals and suggestions. In some cases however – such as the grid plan for New York, a city that has, over the years, developed into a world capital –a concept, idea and model totally detached from the context succeed, perhaps by the force of abstraction, in forging a totally new place. How did you resolve the concept-context pairing in the design of the Fondation Jerôme Seydoux-Pathé?

Thorsten Sahlmann: At RPBW, we believe it is essential to cultivate a specific sensitivity for each place. When doing this, inserting a piece of architecture into a city like Paris with a strong historic stratification becomes a complex challenge because it means establishing as open as possible a dialogue with what already exists. When we embarked on the project, we immediately came up against the local building restrictions. We found ourselves – along with the municipal engineers – using this project almost as a “case study” that would produce insight into the implementation of quality urban architecture.

As well as responding to the client’s functional requests, we wanted to upgrade the quality of the urban space around the new design, without sacrificing three principles: respecting history, being open to innovation and increasing the amount of green space.

Renzo Piano emphasised the prestige of the existing facade on Avenue des Gobelins, a decision prompted not only by its historic and artistic worth – it has been classified as a historic asset since 1977 and features sculptures by a young Auguste Rodin – but also and most importantly by the fact that it is an urban landmark in the Gobelins quarter, an icon which people are fond of and call their own.

Salvator-John A. Liotta: You have preserved the building’s outer envelope but, on the inside, it is as if an alien has landed in the form of a sinuous upward-soaring mass.  I use the term alien with the etymological meaning of “strange and foreign”; I don’t believe there is a direct reference in Parisian architectural morphology. Where did this form come from and how did you come to define it as a whole?

Thorsten Sahlmann: Once inside the historic façade you are in the Fondation Seydoux-Pathé lobby, a transparent space offering access to the Foundation and resembling a greenhouse. Passers-by in the street see a garden and, if they look up, enjoy the curved structure housing the main functions delivered by the design. We created an “egg-shape” from the idea of producing a sort of organic being with fluid forms that would find its intimacy in the metropolis.

We freed up what was previously a densely constructed space, with the result that the trapezoidal plot can now breathe and permits a fluid passage through the space. The ground floor of the building has few vertical supports, allowing great visual and physical permeability. The upper portion of the design was dictated by the desire to maintain a respectful distance from the surrounding buildings and, most importantly, the idea that we could improve the neighbours’ natural light and ventilation. The owners embraced the idea of having more green space and less built area to benefit the overall quality of the design. To do this, we reduced the footprint on the ground and created a garden at the back of the plot. The result is a vegetable haven in the dense mineral context of Paris. Among other things, given the different front and rear levels, and the need for a link, we opted for a slight slope rather than steps and ramps. This means that the ground floor slopes slightly and naturally follows the topology of the location.

Salvator-John A. Liotta: The curtain wall consists in a double skin, solid in parts and transparent in others. This difference becomes manifest in the evening when the office lights come on. What mood were you trying to create; what materials and technical solutions did you adopt?

Thorsten Sahlmann: The outer surface is made of thousands of perforated aluminium pieces. The first two floors feature light-sensitive materials and require no windows. Thanks to the dual skin in glass and aluminium, the top two floors – housing the office spaces and a meeting room – have maximum benefit from the natural light. The timber arches also exalt the internal space of the building, which is extremely comfortable. As a whole, it resembles the hull of a ship, sailing in the Paris sky. The Fondation Seydoux-Pathé is a discreet presence, by day with the reflections produced by the weather and by night when it emanates suffused light. The entrance space behind the main facade will become a screening area, thanks to advanced technology for daylight HD video projection. This will help increase the overlap between light intensities and the alternation of visual projections of the constructed masses – helping to create a rarefied and serene atmosphere.

Salvator-John A. Liotta: The project exploited advanced digital modelling techniques which enabled you to adapt the design parametrically to the context.

Thorsten Sahlmann: We adopted parametric modelling software to achieve three key results: firstly, to manage the complex distribution of the aluminium tesserae on the façade for the desired surface continuity; secondly, to control hole size and density on each panel, with the smallest holes facing south, where they are also more densely distributed, for better sunlight screening and to attain different environmental performances; thirdly, the use of parametric software during the tesserae manufacturing process, all different and in a wide array of shapes, favoured an excellent dialogue with the manufacturer. This practice demonstrates that uniqueness, specificity and differentiation are financially manageable and feasible.

Renzo Piano’s design for the Fondation Jérôme Seydoux-Pathé is hugely imaginative. A sophisticated take on a certain type of transparency and an elegant synthesis of form generated by great sensitivity for the context, it is technologically advanced and rebalances the mineral and vegetable density of its location. It opens to the public on 10 September 2014.
© all rights reserved