“The Golden Lion? It's Our New Pet”

An interview with the curators of “Svizzera 240: House Tour”, the winning pavilion at the Venice Architecture Biennale 2018 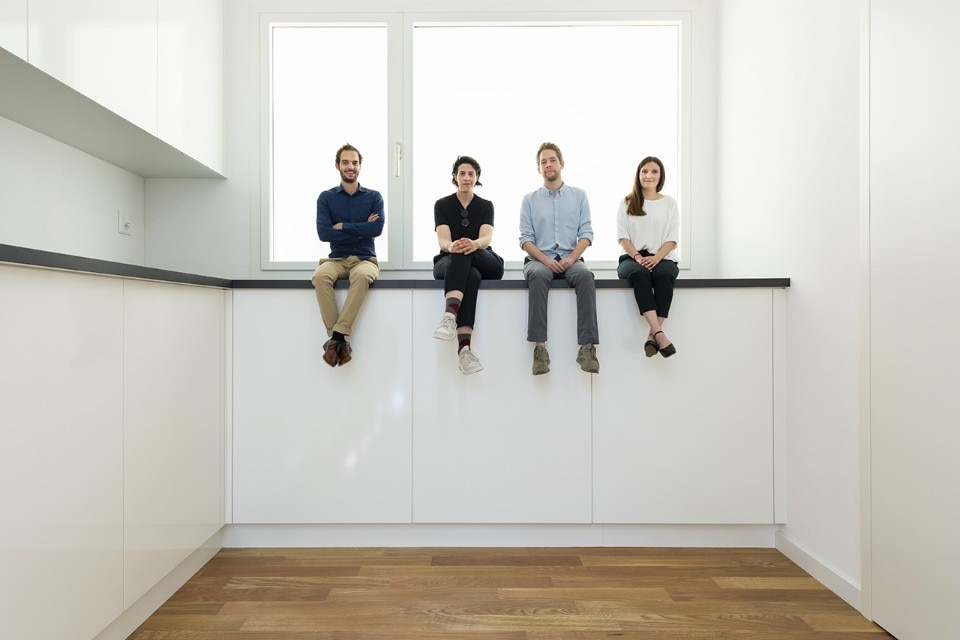 An empty apartment to visit – a form of architectural representation dense with meaning and allusion, one inspiring us to reflect on the state of our world. Oliver Wainwright in the Guardian called “Svizzera 240: House Tour” pavilion, winner of the Golden Lion at the Venice Architecture Biennale, “a place where estate agents might go to die, trapped in an endless purgatory of oversized kitchens, minute bedrooms and corridors to nowhere”. We talked with the curators, Alessandro Bosshard, Li Tavor, Matthew van der Ploeg and Ani Vihervaara, architects at the Federal Polytechnic in Zurich, who explained their design to us.

For the first time, the curators of the Swiss Pavilion were selected through a public competition. What do you think about this formula?
The competition process opens the door to the next generation of architects who are living and working in Switzerland. It would be great for this to continue as many of our friends, students and colleagues offer alternate attitudes and propositions that are necessary for architectural discourse to evolve.
It is also exciting because it is such a risky endeavour in many ways. It’s always a safe choice to go with an established name, but it seems this jury were somehow gamblers at heart and recognized the potential inherent in making a bet with slightly longer odds.

What was your aim, when you decided to attend the competition? Did you achieve it?
Our aim was to instigate speculation or reflection on the appearance of the apartment’s interior shell – the architecture that is literally the closest to all of us, but perhaps the least understood or scrutinized. It is an architectural ‘blindspot’ that often remains hidden behind discussions of the floor plan or questions of furnishing. We hoped to take what was one of the most stubborn and habitual architectural environments and begin to detach it from its ingrained associations as being a neutral, silent, or inconspicuous background.
Through their work, a wide range of architects across Switzerland have already begun to test the potentials and limits of this enclosure, so we were interested in extending this line of inquiry through both our installation and our catalogue (“House Tour: Views of the Unfurnished Interior”, Park Books). In this way, we saw the project as publicizing a question rather than providing an answer. So we look to trigger an on-going discussion, but we see it as already successful to the extent that it has begun to generate an array of critical responses.

What was the best feedback you received?
One of the nicest things so far has been that the pavilion has resonated with different audiences: toddlers, professors, random “famous” people from other design disciplines... Our intent was to stimulate meaning or reflection by allowing the visitors to become active participants in their engagement with the installation, not merely passive recipients of a neatly pre–packaged message. So to produce both a joyful and critical reaction from disparate groups has been very positive so far.

How important is the architectural representation nowadays?
What we call “architectural representation” includes the media through which architects communicate: plans, sections, models, renderings, diagrams and even photographs of empty apartments. What is nice about most representations is that they often contain a high degree of artifice – they do not perfectly portray reality. There is room for error, ambiguity or misinterpretation, which can, in turn, be capitalised upon as a tool of design or criticism. In opposition to a built-environment that is increasingly fixed or pre–determined, we embrace architecture as a speculative practice that literally seeks to draw the wrong conclusion. Architecture’s value is in its ability to conflate the idiosyncrasies of “representation” with “reality” and, by doing so, introduce glitches or inefficiencies into the world that can work to reveal latent potentials or encourage reflection upon that which is routinely overlooked or ignored.
And so, the construction of “Svizzera 240: House Tour” is determined much more by images of apartments, rather than real homes. Photographs pretend to show reality in very high resolution, but everyone knows that a photograph can be quite misleading. In the pavilion, the photograph’s inability to convey scale, dimension, depth or spatial adjacency is presented in built form. We did not build real 1:1 apartment prototypes; instead, we present the raw material of the apartment specifically as a fictive representation—as an architecture that is not yet entirely fixed and determined, but still virtual and open to negotiation.

What is a “house tourist”?
Generally, the house tourist refers to all of us whom rent apartments and often find ourselves endlessly touring the landscapes of the Internet or city in search of a new flat. But more specifically it refers to a type of architectural sensibility that we find productive. The figure of the tourist’is one that we borrow from our employer–mentors Alex Lehnerer and Philip Ursprung, whom have developed and promoted the term for their seminarwoche trips at the ETH over the past several years. The tourist looks closely at new or unknown contexts, but also brings a productive level of naiveté, curiosity (or frustration) that is necessary for the reinterpretation or rediscovery of any given environment. If architecture is more how you do something, rather than what you do – we see the sensibility of the architect as closer to that of a tourist than to that of more sophisticated analogies.

You won the Golden Lion for Best National Participation “for a compelling architectural installation that is at once enjoyable while tackling the critical issues of scale in domestic space”. What does that mean to you?
It hasn’t fully settled in, but until then, it means we have a new pet that we now have to learn how to take care of!