Wherever you find people

In 8 chapters, 20 interviews and many photos, this book edited by Aberrant Architecture analyses the history of a Brazilian icon of public architecture: the CIEPs conceived by the architect Oscar Niemeyer. 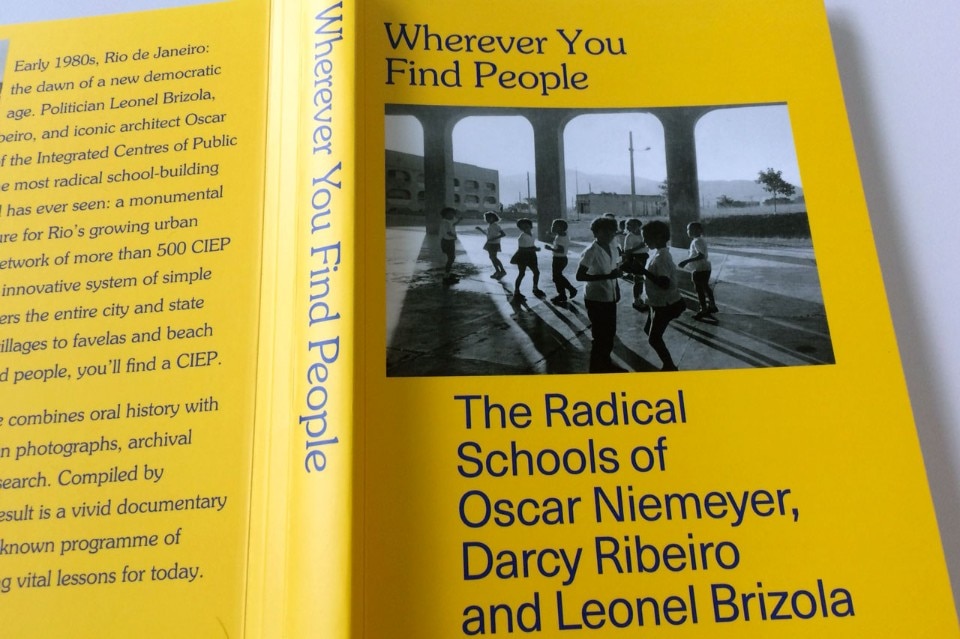 The CIEPs, Centros Integrados de Educação Pública (Integrated Centres of Public Education), were meant to solve a problem. The 508 school buildings constructed from 1982 onward in the State of Rio de Janeiro, Brazil were meant to be an alternative answer for the future.

Wherever You Find People – The Radical Schools of Oscar Niemeyer, Darcy Ribeiro and Leonel Brizola tells the story behind the CIEPs by giving an in-depth and detailed account of the historical and sociological motives that led to their construction. The pros and cons of this iconic and socially driven architectural initiative are weighed. Compiled by Aberrant Architecture in London (David Chambers and Kevin Haley), the book is divided into 8 chapters and over 20 conversations/interviews with the designers of the centres. Numerous photographs that have never been published before are featured. Half of the 508 schools were built in the 1980s, and half in the 1990s, during Brizola's second term in office, all in the State of Rio de Janeiro. Another 500 were left unbuilt, but blueprinted by Niemeyer. They are modular constructions built mainly with solid, tough and inexpensive concrete.

The model for the CIEPs was a "concentrated city" with a central building and other smaller satellites around it: a covered sports hall, an octagonal library, a penthouse for students on the roof, a dental office, a medical office and sometimes an outdoor swimming pool. It was a complete package, given to many cities, from Rio to small towns.
A simple idea, almost a utopia, lies at the base of the design. On the one hand we have Brizola’s vice-governor Darcy Ribeiro (1922-1997), who firmly believed in the power of education and in a system that would, in his words, lead the country to salvation. “Our children represent the most valuable part of Brazil, and also our own destiny as a free and democratic nation, committed to building a worthy existence for all its sons and daughters,” he says in an interview. On the other hand we have Oscar Niemeyer (1907-2012), who through architecture helped obtain the political aims of creating a polis. “I’ll begin by saying it is a revolutionary project, from an educational point of view. A school that not only seeks, like the old ones, to instruct its students, but also to provide an effective support to all the children of the neighbourhood,” the Brazilian architect says in an interview held in 1986. He was referring to redemptive and necessary architecture.
Then there is the criticism of the project. It comes from right-wing politicians who judge Brizola's social ideals unsuccessful, and from people criticising its technical imperfection. In fact, the centres have required special rehabilitation in recent years, especially regarding classroom acoustics and climate control. Fortunately, the CIEPs have shown to be durable. Today, they are being painted. They are decorated with colourful writing and drawings and the grass is cut regularly. It is probable that the State of Rio will need more CIEP school buildings. Toward the end of the book, hoping for such development, the Brazilian Claudia Costin, a senior director for education at the World Bank, says, “And this idea, it’s magic. The idea that it’s possible to change the lives of these kids. If we don’t believe in this, then why have public schools?”
© all rights reserved
Share