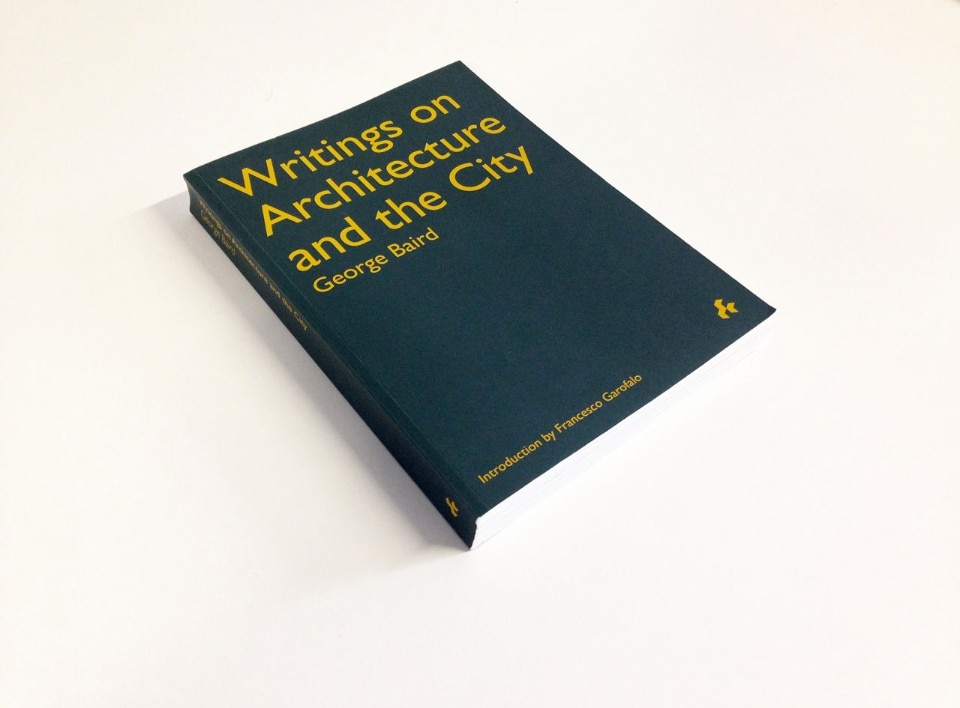 Share
George Baird, Writings on Architecture and the City, with an introduction by Francesco Garofalo, Artifice books on architecture, London, 2015

Writings on Architecture and the City contains 24 essays written by Canadian architect George Baird between 1969 and 2013, and an introduction by Francesco Garofalo. The author is the founder of Baird Sampson Neuert in Toronto and Professor Emeritus  at the John H. Daniels Faculty of the University of Toronto. He has been dean of the same school and taught at the Harvard Graduate School of Design.

The six sections in the anthology, Architecture and Semiotics, Architectural Theory between Structuralism and Phenomenology, Urban Morphology and Architectural Typology, Critical Biography, Public Space Baird clarifies what the relationship between design and political issues should be. By referencing the work of Hanna Arendt, he underlines the relevance of the individual agency expressed by land ownership patterns in urban evolution, as a counterpoint to recent fascinations for postmodernist utopias. (“Thoughts on ‘Agency’, ‘Utopia’ and ‘Property’ in Contemporary Architectural an Urban Theory”). Baird’s conceptualization of urban lot in Theory: Vacant Lots in Toronto (1978) and Studies on Urban Morphologies in North America (1988), give a relevant contribution to removing the missing link between urban morphology and architectural typology. By doing this, it avoids the abstraction of the figure-ground and it bridges the gap between building and urban form left unresolved after Aldo Rossi’s attempt to do so in the last chapter of The Architecture of the City. According to the Canadian architect, the land ownership patterns define an index to understand how conditions of adjacency generate metropolitan building types.

In the post-capitalist city, those patterns become a precious map to redefine the real possibilities of an urban architecture as suggested by Atelier Bow Wow’s work in Tokyo.

As indicated by Francesco Garofalo in his introduction, in the late 1960s George Baird – as too other architects with whom the Canadian writer was in contact during his early 1960s’ studies in London including Joseph Rykwert, Charles Jencks and Alan Colquhoun – saw writing as a necessary intellectual process to describe the new conditions in which architecture was operating and contributing to theoretical practice. Writing promulgated a shared idea of architectural theory, not in the sense of “subjective and empirical” knowledge but as general and logical knowledge, capable of rooting architecture in a vision broader than that of the architect’s personal choices, as Baird himself specified via the words of Ignasi de Sola-Morales in the review of Differences: Topographies of Contemporary Architecture (1997).

Theoretical practice became an essential part of the “research” mentioned also by Aldo Rossi in the foreword to his Scritti Scelti sull’Architettura e la Città (1975). However, lacking the post-modernist pessimism prompted by the fragmentation of the architectural discourse, in which the Italian architect was also involved, the decision to begin the collection with the two most speculative sections Architecture and Semiotics and Architectural Theory between Structuralism and Phenomenology shows that the Canadian sees architectural theory as a topical and potential project today.

Baird’s trust in theoretical practice reflects the fertility of North American academia and a vision conscious of the fact that totality is no longer the problem of architectural theory. The different subjects – cities, buildings, events, figures, texts and debates such as that between criticals and post-criticals – illustrate how the fragmentation of the discourse has become the terrain on which contemporary architectural criticism is formed and evolves. An introductory note to every text in the collection suggests that architectural theory is now an accumulation of texts produced as “events” dictated by circumstances, undermining the idealism of a theory intended as a system of principles a priori to the facts and, above all, to the design process.

Baird’s sensitivity to circumstances is a symptom of the concern for an operative criticism that produces theory and influences architectural practice. The Criticality and Its Discontents essay (2004) examines the critical thinking and autonomy of architecture, dissociating them from the principles of resistance and opposition that Michael K. Hays’ writings and Peter Eisenman’s avant-garde developed out of a restrictive interpretation of Manfredo Tafuri’s history. In the Marxist cultural context, the influence of intellectuals such as Louis Althusser on the Canadian architect introduces a humanism that triggers reflection on the essence of architecture as a structure but also as a phenomenon, with a sensitive and aesthetic dimension that is not dissolved in the abstraction of architecture into the product of structures and general processes.

Baird uses semiotics to define an architectural epistemology in relation to structures and cultural processes, highlighting the limits of the ideologies of the total design of Eero Saarinen’s CBS building and Cedric Price’s life-conditioning Potteries Thinkbelt but he does not disavow the use of phenomenology to emphasise the importance of individual perception in the description of buildings by Alvar Aalto, Hans Scharoun and Frank O. Gehry.

The Canadian writer’s critical practice is contrary to all determinism between architectural theory and practice, a relationship that is never conceived as direct or totalising. The analogy between architecture as langue and parole, borrowed from semiotics, expands the categories of interpretation beyond functionalism, although the Canadian writer is at pains not to propose it as an aesthetic or formal solution immediately applicable to the design process. What might seem a weakness is actually recognition of the autonomy of the architectural discipline and a precaution against the risks of a growing shift in the language, which Baird already catches a glimpse of in the aestheticisation of the ordinary in the architecture of Venturi, Rauch and Scott Brown.

George Baird’s criticism does not produce urban visions as Mario Gandelsonas’ do and it does not suggest immediate tools as Colin Rowe’s figure-ground theory does. However, his visionary realism indicates a more enduring pathway towards an architecture that is knowingly “decorative”, as suggested by the author in the piece that ends the collection Why Architecture Cannot be Happy? (2009).

Unlike complexity elevated to an architectural paradigm – sophisticatedly updated by Alejandro Zaera Polo’s latest collection of essays The Sniper's Log: Architectural Chronicles of Generation-X (2013) – this architectural practice suggests how it is possible to theorize and construct a public presence that is simple and optimistic and at the same time, critical and protective; profound and popular.