We met Lebanese artist and co-founder of the Arab Image Foundation at a recent British School at Rome exhibition. He explained his work and his attempts to connect them to human life 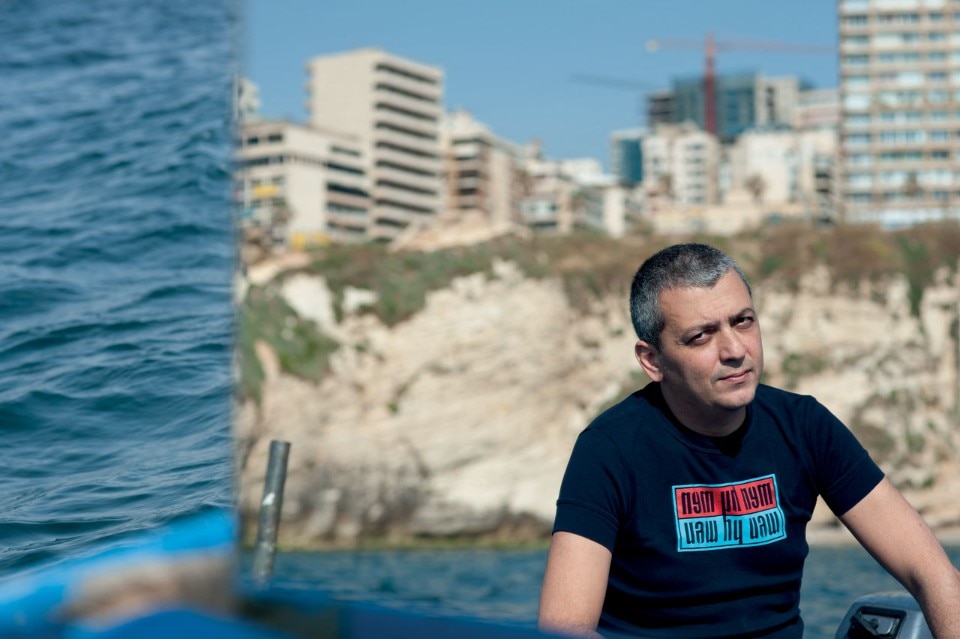 Share
As in any good novel, this story begins with a: “Rumour has it that” during the 1982 Lebanon War a young pilot flying over a town disobeyed an order to bomb a school, having recognised it as civil architecture. A collection of snippets, documents, pictures, drawings and videos linked to that event provided the material for a film reconstructing an archaeology of remembrance. Letter to a Refusing Pilot was inspired by something that really happened in Saida in Lebanon, where the artist Akram Zaatari was born.

This almost miraculous event is still carved into local minds, the symbol of a collective heritage not narrated in school books or newspaper headlines, but remaining powerfully out of sight. The Lebanese artist Akram Zaatari speaks of personal experiences, a fabric of memories that turn a marginal individual history into the nerve centre of his research and the key to maintaining a human gaze and contact with reality in a country plagued by war.

There is another letter in the British School at Rome’s exhibition on the Lebanese artist. It was found buried at Ain el Mir in 1985, a village that became an outpost after Israeli troops withdrew from the zone and was occupied by Lebanese freedom fighters. The letter was written and buried in the garden of a house the fighters requisitioned from civilians. In it a militia fighter explains the reasons behind their occupation and welcomes the owners back at the end of the war in 1991. The video In This House reconstructs the story and reasons behind an action that, once again, looks at a war context not from an official perspective but via the story of individuals. Zaatari is a key figure in Lebanese culture who, mixing the roles of photographer, filmmaker, archivist and curator, co-founded the Arab Image Foundation in Beirut, an organisation that conserves amateur and professional pictures on the Middle East and North Africa. Preserving their roots and identity, it has built up an archive of half a million photographs since 1997.

Beatrice Zamponi: Your work amasses all sorts of snippets: photographs, films, maps, drawings... Can we say you want to reconstruct an iconographic history of your country?

Akram Zaatari: I do collect all sorts of documents, including oral records, partly as a reflection on the practice of recording and representing, and partly to position myself in history. I am not a historian but much of what I do is writing history. I mean what surrounds me, not the history of my country. Countries are very recent inventions and are probably not final entities.

Beatrice Zamponi: The Letter to a Refusing Pilot video prompts an immediate reflection on the importance of education and knowledge in creating human tolerance and understanding and in reaching ethical decisions in times of war. In fact, it is thanks to his architectural studies that the pilot recognises the school as a civil construction and decides not to strike his target.

Akram Zaatari: The work has to do with the pretence that the military can effect surgical operations and only target military positions but this is totally false.  In war, the losers are the civilians and civil society. War changes the cityscape, demography and social fabric. I wanted to stress the role of the individual who says NO to the war machine. This is where our emotions, as individuals, come in, strongly imprinted by our family history and our education, which includes what we learnt at school, the books we read, the films we watch and the kind of human we want to become. That is why my film starts with Saint-Exupery’s The Little Prince, a work that left its mark on a whole generation. The film tells the story of a soldier who steps out of the war equation and becomes a civilian. He decided to stay true to what he was taught at school, where he learnt that it is far easier to destroy than to construct and that what takes thousands of years to build in terms of infrastructures in the urban fabric, social bonds and traditions can be destroyed in a fragment of a second. Isn’t that frightening? The story speaks of preserving our humanity, our shared humanity, in times of war.

Beatrice Zamponi: The letter is one of your recurrent themes. Is it a reference to the need for a relationship and personal and direct communication between people?

Akram Zaatari: A letter is a measure of distance. We’re lucky to have hard copies of letters so that we can retrace communications between people. A letter is testimony to what was said and today would take the form of a very personal conversation. An interest in history cannot ignore letters. What I also try to do is produce my work in letter form, with the letter acting as the tectonic element. I have done this several times as in Letter to Samir, Red Chewing Gum, Awada’s letters etc.

Beatrice Zamponi: You use photography and video a great deal but say you don’t see yourself as a photographer. Of photography – you have stated – I am interested in its potential to connect with other people’s subjectivity. Can you elaborate on this?

Akram Zaatari: I would be happy to consider myself photographer if we expand the definition of what a photograph is. I don’t compose situations and am not interested in lighting. I am concerned with what ties humans to recording, to history and to a photographic practice of recording. But, if we expand the definition of photography to bring in every discipline based on a photograph or a record, then I am indeed a photographer. I work on pictures and seek to understand how they enter human lives. I keep wondering what a photograph is. This is a crucial but still unanswered question. It cannot be reduced to paper, emulsion and silver particles, nor can it be reduced to aesthetics. A photograph is the shortest statement one can make, live with or keep trying to understand and reflect upon.

Beatrice Zamponi: It’s interesting to note that you often focus on decentralised places and areas, provincial ones such as Saida, your hometown. Your work also seems to show an interest in space on a human scale in your geographical choices, is that so?

Akram Zaatari: My personal history is part of my work. Saida happens to be where I grew up and the place I know best. I am interested in the peripheral, not only geographically speaking but also as a state of mind. I’m not interested in stories that make news headlines worldwide and certainly not interested in working on what happens today. I only approach a conflict after it has cooled down and I talk about subjects from a very decentralized angle, the least predictable one. Maybe my work in a forgotten city such as Saida is rooted in that, too.

Beatrice Zamponi: Speaking of the film In This House, how did you hear about the story of Ali, the soldier who wrote and buried the letter?

Akram Zaatari: I was interested in any documents people of my generation might have kept from the time of the 1982 Israeli invasion. Someone told me that this photographer – today Ali Hashisho is a press photographer – used to be in the Lebanese resistance and was actively engaged in fighting the Israeli occupation of South Lebanon in the late 1980s so I thought I should meet him. I was sure he’d have stories to tell me. He told me many tales and eventually he said, “Yes, this thing I did might be of interest to you.” I then got in touch with the family, following a map he drew for me. I was not sure I would find it as there was a good chance someone had dug up the garden, found it and thrown it away, not knowing there was a letter inside. It was in a leftover piece of ammunition and the area was full of them in the 1990s. I started my search and, with this work, delivered the letter to the family it was addressed to. I also helped write a part of the history of that region at war. It’s an occurrence that had completely vanished from the historical narrative of that period. The story is just a detail in the recorded history but frankly I’m more interested in details than headlines.

Beatrice Zamponi: Here, war becomes a pretext for a very human story, a soldier’s love and respect for a house where he has stayed and its owners. What did you want to highlight?

Akram Zaatari: It is, indeed, an example of people who fought with an ethic but this is not what interested me. I was interested in opening a time capsule and delivering the letter. I hope I closed a chapter in the life of this man, Ali Hashisho, and in the family’s history. I made the film when the US was invading Iraq I was implicitly asking how future generations will reflect on that war.