From the Domus archive, the IBM pavilion designed for the 1964 New York World's Fair, “an ovoid theater that transports spectators as if in a large, suspended spaceship.” 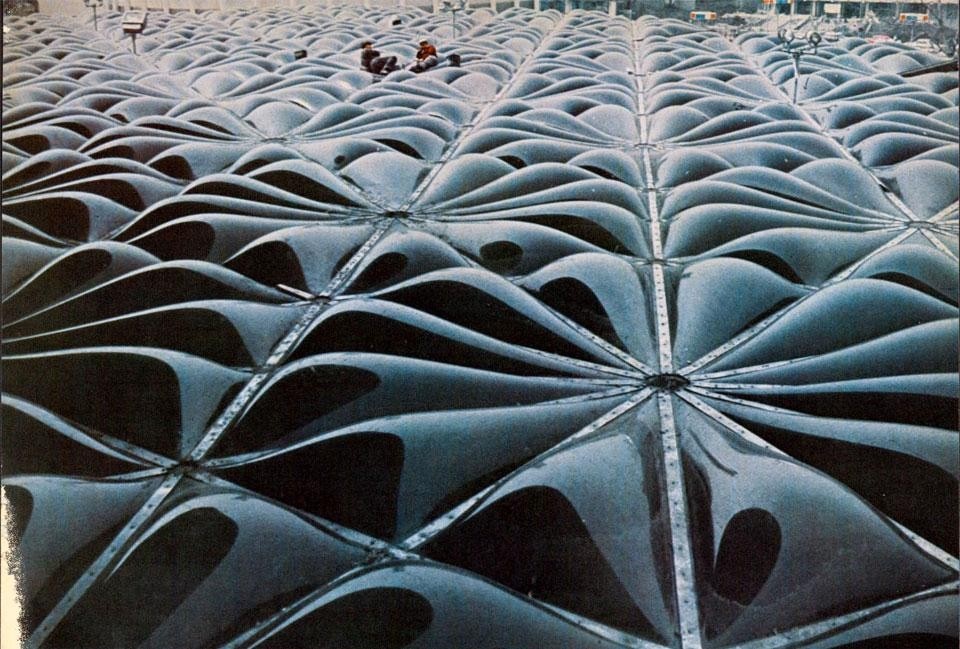 By then enshrined as a living reference for a now international design community, in the 1960s Charles and Ray Eames were engaged in a phase of recomprehension of their path as experimenters, a phase focused on the media and technological aspects of space and architecture: Powers of ten, their film series devoted to the cross-reading of all scales of existence through powers of 10, would be released in the following decade.

For the 1964 New York World Fair, their research meets that of the Saarinen studio in a spatial media device that Domus presented the following year at the fair in issue 424 as a new frontier of dematerialization for experiential space architecture.

Domus readers have already been given an anticipatory view of Charles Eames’ famous IBM pavilion. Its main feature is the suspended theatre, an ovoid volume raised above the forest of steel tree-like structures which support the translucent roof over the open-air exhibit. A huge hydraulic lift (the People Wall) lifts a completely seated audience of five-hundred people fifty feet into the ovoid theatre (the lnformation Machine).

This audience, “withdrawn” from the crowd and isolated within the huge egg will be in the “centre” of an unexpected spectacle; as in a space-ship, of unusual dimensions, the spectator's feeling of surprise and uncertainty will predispose him to a greater emotion. There the show begins: a multiscreen film presentation, including motion picture and still slide projections, four sound systems, runways and stages for live actors appearances.

Multiscreen large-scale projections had already been experimented by Eames (US Exhibition in Moscow, 1959) but now, for the first time, the theatre itself has been built together with the spectacle, the one being conceived in relation to the other.
A new theatre architecture, for a new sort of performance. The suspended ovoid “audience centered” theatre offers any numbers of possibilities for new forms of spectacle — exploiting the multi-screen and multi-stage simultaneity of images on different scale, inside a single space.

The suspended Ovoid Theater may actually be an invention which goes far beyond the occasion of the Fair. And, in the future, it may even be a solution to the World's Fair problem, i.e., to the problem of world information on world progress. Replicas of the Ovoid Theater in the different countries will make possible to give people — at the same moment — the same up-to-date information, without obliging them to converge from far away distances at one point in the world.

Getting back to the IBM pavilion, it is interesting to see how its two parts are devised: how all the open air Belle Époque like exhibition (entertaining display of computer lore) is gathered under the trees, while the huge ovoid theatre, the theatre of the future, is still suspended above.