For the second edition of domusforum, ISPI has developed a study on urban energy analysing ten cities on the basis of five different types of energy. 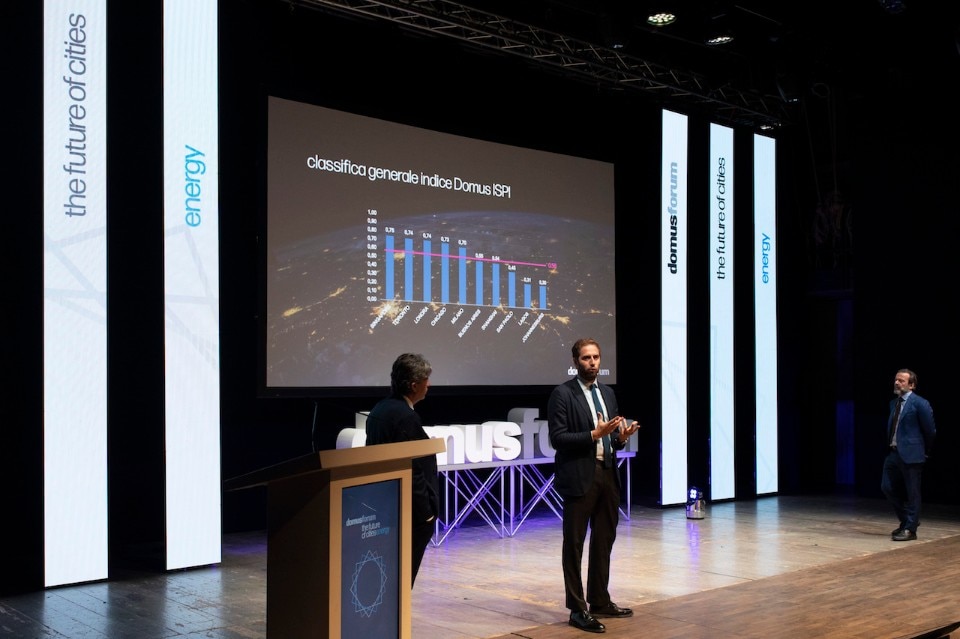 Cities are continuously changing living organisms. They are the result of a project and everyday life, nature and the built, wealth and poverty, mobility and memory, injustice and innovation. The urban planner Eddy Salzano (who regrettably died recently) sees three inextricable levels as coexisting in them: the urbs, or the existing physical space; the civitas, meaning the citizens made up of flesh-and-blood inhabitants; and the polis, the set of institutions responsible for administering it. Analogously, Richard Sennett holds it is necessary to distinguish between the ville, whose constituent parts are streets and buildings, and the cité, animated by the daily lives of the citizens and so made up of habits, tastes, colours, smells, noises and individual ambitions.

Cities are fundamental actors of our time. Although they cover only 2% of the earth's surface, metropolitan areas are actually home to 54% of the world's population, consume 60% of global energy, produce a similar share of polluting emissions and leave behind 70% of the waste. On the other hand, they are worth 70% of the planet's wealth and they influence customs and cultures far beyond their boundaries. Since, in all these dimensions, the relative importance of cities is bound to grow in the coming decades, thinking about this subject is multiplying in an attempt to improve urban performance and define virtuous practices.

In general, cities have acquired a central role in the debate on sustainable development and it is no coincidence that they are dealt with in Objective 11 of the UN Agenda on Sustainable Development, which reads: “Make cities and human settlements inclusive, safe, resilient and sustainable.” This poses some substantial questions. How is “sustainable development” achieved at the urban level? Can we win this decisive challenge for humanity? Beyond the concept of GDP, what instruments do we have to represent the metropolis?

Beyond GDP: five dimensions to understand the century of cities

Through the City Prosperity Initiative (CPI), the UN agency Habitat measures the prosperity of 400 urban centres through six different dimensions. Starting from the ICC method, for this second edition of domusforum ISPI has developed a study of urban energy, seeking to define a model that captures the dynamic elements of ten cities. Clearly there is a difference between prosperity, a concept that takes a picture of the existing state of affairs, and energy, resulting from forces in movement and not always harmonious.

The advantage is to observe interactions and interdependencies between areas that are usually studied in isolation. What emerges is a multi-faceted portrait, whose interpretation enables us to theorise some future trends. The image of each city is rendered by a pentagon, in which each vertex represents a dimension of energy. The greater the surface area of the pentagon, the higher the total energy of the city. The more regular the shape of the pentagon, the greater the balance between the five energies, with similar levels of development between the various dimensions.

Between harmony and inhomogeneity: the two faces of development

Looking at the pentagons, Milan, Chicago, Toronto and London (the four cities of the OECD countries) show a homogeneous distribution among the five energies, which is explained by a stage of mature development, stable demographic trends and contained social imbalances. In South America, Buenos Aires appears more balanced than São Paulo, which is stronger economically. For Asia, Singapore and Shanghai exhibit two pentagons of similar shape, although the former is overall much stronger than the latter, which is still in the middle of a catch-up phase. In Africa, Lagos and Johannesburg, they reveal enormous problems, certainly due to inequalities and the exponential population growth.

There seems to be a direct correlation between demography and energy. Cities that are too populous have more unbalanced features, while cities below five million inhabitants maintain a certain harmony in development.

It is interesting to note that cities differ mainly by attractive energy (from 90% for London to 2% for Lagos) and social energy (from 88% in Chicago to 17% in Johannesburg). These seem to be the dimensions that most determine relative performance. The scores tend, however, to converge as far as kinetic and environmental energy is concerned, where the primacy of Singapore stands out with 84%. This is a sign that the environment and mobility remain the great urban challenges common to all cities, regardless of level of development. Milan is first for kinetic energy (72%) and fifth in the general classification (70%), preceded by Singapore, London, Toronto and Chicago, and followed by Buenos Aires, São Paulo, Shanghai, Lagos and Johannesburg (30%). Together with Chicago (88%), Toronto is first for social energy, confirming its reputation as a liveable, inclusive and open city, which also secures a very satisfactory overall performance (74%), equal to London.

Overall, the ten cities clearly fall into two groups. There’s a very energetic first group (the four OECD countries and Singapore), with five cities between 75% and 70% of energy, and a second group with much lower energy levels and greater distances. Looking at the internal variability of each city with respect to the five dimensions, an hourglass-shaped figure emerges. It reaches a maximum in the lower part of the ranking, becomes thinner in the centre and increases again at the top. We can assume that the various urban energies grow in a disorderly and contradictory way in a first phase of development; then stabilise with a steady economic structure and demographic trends. Finally they start to move asynchronously when a city leaps towards the global stage.

Since these are relative rankings, cities like Johannesburg and Lagos appear to be low on energy. It is all too clear that this is hardly true. Apart from the comparison with cities like London or Chicago, the two African metropolises enjoy remarkable vitality, yet its future outcome is uncertain.

In conclusion, the ISPI study reveals a trajectory that goes “from inhomogeneity to similarity”. The higher we go in the energy classification, the more closely the pentagons tend to resemble each other in shape and size, indicating that the most highly developed global cities share strengths and criticalities. Cities still under development, by contrast, present greater disparities, with each distinguished by peculiar opportunities and problems. Growth phases, with cities as with any living organism, also proceed by spurts and contradictions.