Half a century ago an icon of Italian design was born, capable of renegotiating the very idea of utility and dissolving the boundaries between contemporary art and design, later reinterpreted by various artists, including Paul Smith and Maurizio Cattelan. 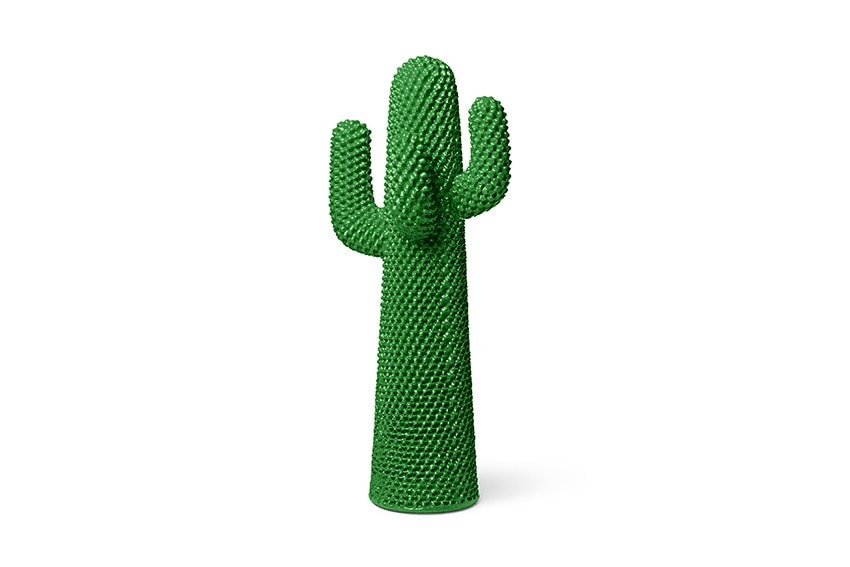 For many, it is one of the most iconic and representative objects of the radical strand of Italian design. However, to consider Franco Mello and Guido Drocco’s Cactus – made for the Gugliermetto brothers' Gufram exactly 50 years ago, in 1972 – just a designer object would be an understatement. Cactus is a totem and a sculpture at the same time. Wherever it is placed, it takes centre stage and acts as an eye-catcher. Its original function as a coat rack is soon forgotten: Cactus is too surprising and provocative to be enclosed and compressed in the coercive cage of function. Not least because at the very moment it is defunctionalized, Cactus takes on a plurality of meanings and possible uses that make it a truly polysemic and multipurpose object.

At the time of its design and creation in the early 1970s, Cactus – together with Ceretti, Derossi and Rosso’s Pratone and Piero Gilardi’s Sassi – was a symbol of the trend that aimed to bring back into the artificial living space that naturalness that architecture inevitably distanced itself from. Not only that, but it was one of the most exemplary results of the artistic-design tension and radical ferment that challenged the tried and tested rules of modernist Rationalism and made design the battering ram of a determined attack on the auratic character and uniqueness of the work of art, claiming an aesthetic value even for the serial artefacts of industrial production.

A naturalist fetish made of polyurethane, Cactus was born in that context and immediately offered itself as an ironic, irreverent, difficult to use, sufficiently playful and essentially useless object. Better still, Cactus was and is one of those Italian designer objects that – like Studio 65's Capitello or Sebastian Matta's Magritta pouf – renegotiated the very idea of utility, freeing it from performative functionality and shifting it instead to the capacity for emotional and communicative engagement.

Cactus is “useful” not because it can also function as a coat rack, but because it works without necessarily being a coat rack. And because it ends up dissolving and liquefying the boundaries between contemporary art and design, between mass production and limited editions, between nature and culture. Initially produced in the iconic emerald green, over the years it was subject of a chromatic nomadism that led designers to experiment with the most diverse colours. Metaphorically “evergreen”, in 2007 Gufram produced a white version (Biancocactus, soon sold out), in 2010 it was the turn of Rossocactus and then Nerocactus, still in production.

In 2012, for of its fortieth anniversary, it was reissued in a new limited edition called Metacactus, with the green of the body fading to orange at the tips, “as if they were burnt by the scorching desert sun”. But there is also the Bluecactus, with the three colours of the French flag, and the all-gold Cactus, produced in 2010 in a single example, now in the collection of Plart in Naples.

Artists and stylists let themselves be seduced by Franco Mello and Guido Drocco's “creature”: the stylist Paul Smith not only produced a limited edition of 169 with Gufram, with colours so lysergic that some called it “a peyote of creativity”, but also made it the iconographic leitmotif printed on many of the garments and accessories offered by his Maison. Not to mention the installation designed by Maurizio Cattelan and Pierpaolo Ferrari for the 2015 Venice Biennial: an enlarged Cactus placed next to two enormous eggs (from Gianni Ruffi’s La Cova) on a raft floating in the lagoon with the irreverent name of God: a paradigmatic example of how certain provocations of contemporary art can find in design a precious stimulus, a witty ally, perhaps even their source of inspiration.

Moreover, confirming the osmosis between this design culture and contemporary art’s research, Franco Mello himself declared that today he would perhaps remake the Cactus with a metal casting, perhaps in bronze, or that he would redesign it with different pictorial interventions, but “with the addition of a random element, an apple, a bird, a crystal ball”. This confirms how an object like this really allows us to gaze into the future.