The rise of robot dogs

The new CyberDog, costing the same as a flagship smartphone, could be the device that propels us straight into a posthuman future. 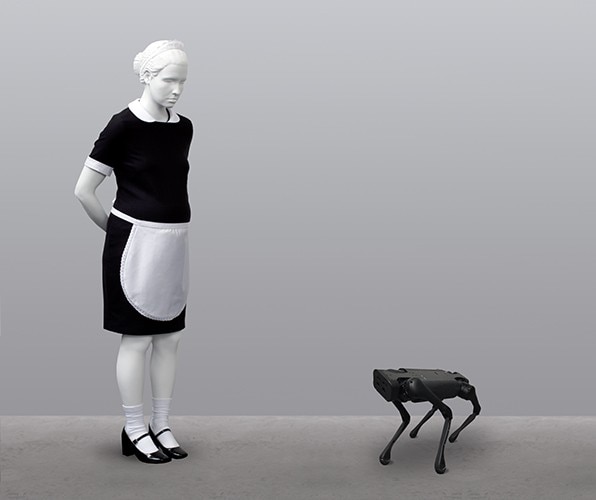 It curls up. It jumps backwards, somersaulting in the air. It walks on two legs, standing upright. It runs – up to a maximum of 3.2 metres per second. It would even wag its tail if it had one. On the other hand, it has three USB-C sockets on its back, plus an HDMI socket (yes, the one for the TV) and a host of sensors, including an Intel RealSense D450 camera that can detect and avoid obstacles with centimetre accuracy. This is CyberDog, the robot dog launched by tech giant Xiaomi last year (at the tail end of a new smartphone line-up) and recently presented in Europe at the Mobile World Congress in Barcelona. In a somewhat deflated fair, widely regarded as a miracle, squeezed as it is between the pandemic and the invasion of Ukraine, this (potential) men’s robot best friend is an absolute star.

Controlled by smartphone, remote control or voice, Cyberdog’s AI-powered brain is the Jetson Xavier NX supercomputer, a powerful module developed by Nvidia, supported by a memory unit of around one terabyte. The dog has an autonomy of about one hour before needing to be recharged. Applications include security and help for the disabled. There is no mention of its use as a weapon. Moreover, the dog can carry objects – up to a weight of 3 kilograms. For Xiaomi, this device is the calling card of the company’s robotics sector, which we can expect to become increasingly important in the coming years.

Aesthetically, Xiaomi’s CyberDog is nothing new and recalls the most media-savvy robot dog of our time, Spot from Boston Dynamics, a company that is currently in Hyundai’s portfolio after having been acquired by Google and the Japanese Softbank group. Spot was also exhibiting at the MWC, as a guest on the IBM stand, not too far from the Xiaomi stand.

Among the uses of Spot listed by Boston Dynamics there is the exploration of radioactive areas or mines tunnels. As well as the inspection of construction sites and manufacturing plants, using a sophisticated system for comparing the work progress through the creation of digital twins. However, those Spot has become popular for are certainly linked to the use of the robot dog in the Massachusetts police force, especially for anti-bombing purposes. In a video on YouTube, a couple of Spots linger outside a house in an American suburb, probably before breaking in, so as to inspect it and not endanger the real officers.

In May 2020, at the height of the pandemic, the Singapore government employed Spot to enforce social distancing in parks, barking at anyone who disregarded it. More recently, it has been used in Honolulu to measure homeless people temperature. The New York Police Department has started developing its own robot dog. In Rhode Island there are already calls for a ban on its use by the police. On the US-Mexico border, Vision 60s from Ghost Robotics, another robotics company, are being used to guard the border against illegal immigrants. The Military Times website reports on the success of the robot dogs at the US Army conference in late 2021. Similarly to what happened at the MWC.

Spot, just as CyberDog, is not a weapon, an essential aspect for Xiaomi as well as for Boston Dynamics. Boston Dynamics explicitly stated this to the American magazine Gizmodo: “We want to reiterate that the agreement signed by Spot’s users is they cannot use it for any purpose that could harm or threaten people.” For the robotics company, it is vital that the dog is not seen as a danger to humans, not least in view of the bipedal Atlas model launch, which marks a paradigm shift on a symbolic level, with its anatomy seemingly modelled on that of a human being. Or the Terminator, depending on your point of view.

The imagery associated with these devices is all about terror and dystopia. In the Metalhead episode of Black Mirror’s fourth season, released in 2017, stray robot dogs resembling Spot embody the nightmare of a posthuman society dominated by machines. However, the negative perception of the robot dog is, as is often the case, primarily a cultural and local construct, which should not be considered universal. The South China Morning Post reports that robot dogs are very popular in China, both on the streets and on social media, and in an article, journalist Yingjie Wang wonders whether they will somehow replace pets. A popularity that owes a lot to Xiaomi’s CyberDog, launched with a quite affordable price: 9,999 yuan, about 1,600 dollars, more or less the price of a high-end mobile phone, a long way from Spot’s approximately 75 thousand dollars. At the same time, it brings us back to a phenomenon of years gone by as well, when thinking the robot dog would be men’s best friend of the future seemed normal.

Wired has recently published an article entitled “Who killed the robot dog”. But more than the artificial dog, what may have died is its utopia. The author, Britt H. Young, traces the dream of the artificial pet in the imaginary, passing through episodes of The Jetsons (Hanna-Barbera series), Doctor Who’s robot dog K9 and Walt Disney’s 1927 short film about Oswald, entitled The Mechanical Cow. Going back through the centuries, we reach the great automaton season of the modern age. The first descendant is Sparko, the first real electric dog, presented by Westinghouse as the faithful partner of a futuristic “electric man” at the 1930 New York World’s Fair. This was before the very concept of the robot was established in the middle of the last century.

In the post-war period, more or less smart toy dogs became popular, such as Tekno the Robot Puppy or the iDog from Hasbro and Tiger Electronics, dancing to the iPod beat. However, these were animals with a soft aesthetic, designed for children, far from the chrome skeletons and unstructured and aggressive lines of Spot or CyberDog.

The epigone of this story on smart toy dogs is Aibo, launched by Sony at the end of the 20th century. It was a revolutionary product, probably premature, which did not spread outside Japan, but became an incredible cultural phenomenon whose echoes reached the West. When Sony pulled the plug on it, first withdrawing it from the market because it was considered unprofitable and then ceasing all support, the Buddhist temple of a Japanese town celebrated the symbolic funeral of 13 units. Ten years after its discontinuation, in 2017, Sony put Aibo back on the market – presenting it, among other things, at a Milan Design Week as the key station in an intriguing journey into artificial intelligence. With its manga-like eyes, curves that caress its geometry and delicate movements, Aibo is an artificial pet that looks much more harmless than any CyberDog. But it would be wrong to judge it from the outside. Behind its sweet toy-like features and highly kawaii aesthetic, Aibo has a highly refined artificial intelligence, is constantly connected to the cloud via an integrated sim and can recognise up to 100 faces and around 50 voice controls.

Aibo is less scary than Spot or CyberDog. However, behind its cartoonish appearance, there is still a growing and evolving non-human brain. Maybe tomorrow it could be it chasing us if the nightmare of Black Mirror turns out to be real.

Anyway, it is likely a robot puppy will soon enter our lives one way or another. This is already the case in the images accompanying the opening of the exhibition Useless Bodies by the Scandinavian artist duo Elmgreen & Dragset, on display from 31 March at the Fondazione Prada in Milan. A huge exhibition with the human body at the centre of the topic. And on the city streets are huge posters in which, next to the mannequin representing a pregnant white waitress, you can see an A1 robot dog by Unitree Robotics. A model costing around 3,000 dollars, not too different in appearance from the design of CyberDog or Spot, which could soon be part of the street furniture in our cities, or even our homes.

Read also: With the Tesla Bot, Musk is trolling us again – and it’s fine