Night Fever: the (total) artwork of nightclubs on display at the Vitra Design Museum

Nightlife from the 1960s to the present is on show at the Vitra Museum in Basel from 17 March to 9 September. We were there: here’s the report. 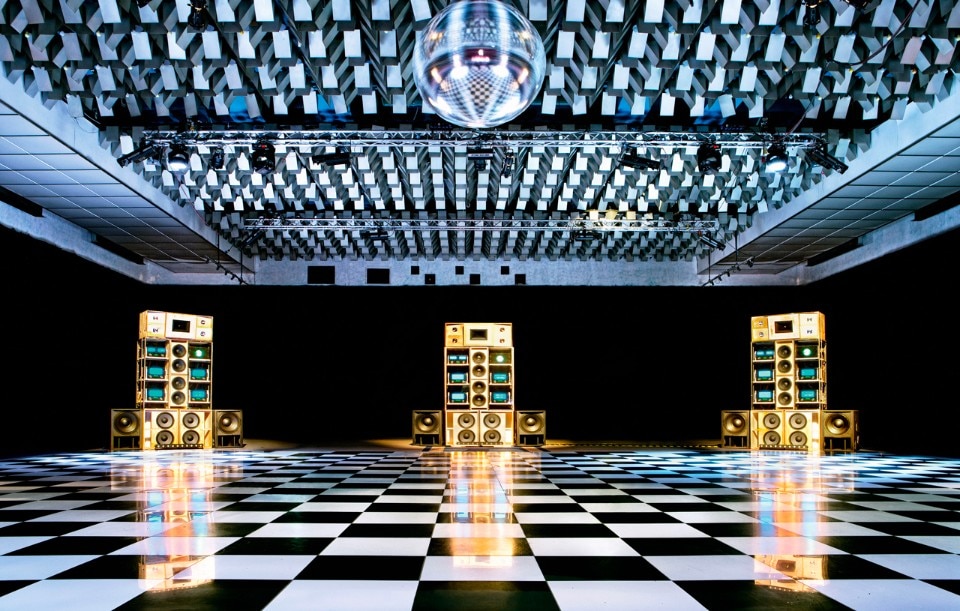 Nightlife matters. To paraphrase the most effective and celebrated injunction by architect and film director Charles Eames, “Take your nightlife seriously.” Night Fever. Designing Club Culture 1960 - Today, at the Vitra Design Museum in Basel, is an exhibition that recounts the story of nightclubs from 1960 to the present. Viewed through the lens of design and architecture, it defines a development that brings with it the cultural changes that have unfolded from the second half of the 20th century until today. It goes almost without saying that it embraces the whole of LGBT culture, emancipation from the concept of gender, the transition from capitalism and postmodernism to gentrification and the postmodern collectivism of the cities. Club culture has been the setting for all this, and it continues to evolve. It would be impossible to think of Sartre's existentialism and De Beauvoir without the setting of the Paris of the Deux Magots, or the literature produced by La Voce and Futurism without Caffè Le Giubbe Rosse in Florence, Friends (sitcom) without close newyorker apartments.

The exhibition starts from the proposition that nightclubs are total works of art - no less than Wagnerian operations - with the difference that the physical place (the club), with its interiors, is the artistic starting point of the work. The patrons of the club are the actors in this artwork. The way they occupy the spaces is art. The way the spaces are divided up is art. The distribution of light is art. The sound is art. The waiter in livery and the culture of the cocktail is art. And I’m certainly not saying this to promote it and I don’t endorse it, but ecstasy has also been part of the spectacle. Night Fever at the Vitra showcases all this, while also trying to convey that sense of belonging to a culture that has changed over time. Let me clarify: I was born in the middle of all this, in the 80s. It is a necessary clarification because the exhibition is a many-sided experience: of revival (or revivalism: disco on Sunday afternoons in the '80s), but also nostalgia for the past as experienced by others, not lived. The exhibition opens by recounting the 60s and the discos of the radical period in Italy (on showcase Domus covers).

In the essay accompanying the exhibition catalogue (a must-have for aficionados) Catharine Rossi writes: “As elsewhere, Italy had a culture of nocturnal leisure spaces, including bars, jazz clubs and ballrooms.” Discos attracted the most experimental architects of the time, because “their seemingly democratic, uncodified, and as yet uncommercialised nature offered a freedom to envision new possibilities for architecture and design.” All this was embodied in the Piper in Turin, designed by Pietro Derossi, Giorgio Ceretti and Riccardo Rosso (who later became Gruppo Strum). In 1967 they created L'altro Mondo in Rimini. Florence had several Pipers designed by Archizoom Associati, Cristiano Toraldo di Francia and Adolfo Natalini of Superstudio. They also designed Mach 2 in Florence: the entrance to the exhibition replicates its tunnel. Then there was Gruppo 9999 with Mario Bolognesi, who opened the Space Electronic. Outside the big cities, Bamba Issa was designed by the UFO group at Forte dei Marmi and Studio 65 was active in Piedmont. In Milan, Bang Bang was designed by Ugo La Pietra, Aldo Jacober and Paolo Rizzati, while Gruppo Strum created a theatre at the Milan Triennale that evoked the Piper.

And speaking of theatres, in nearby Paris in 1978 Roland Barthes himself wrote an  article for Vogue Hommes about La Palace (a 1920s theatre turned into a night club by Patrick Berger). He described how the makeover had regenerated the interior for its new use, with light playing an essential role, in contrast with the theatre. “In ordinary theatres, light is remote, fastened to the stage. At Le Palace, it is the whole theatre that is the stage; here light occupies a deep space, within which it comes alive and performs like an actor.”  Barthes declared that it was light that made the work, the theatre, all-encompassing. And the Vitra exhibition brings this out clearly: the design of technology is a fundamental aesthetic complement of clubs. Light and music make discos. Ben Kelly, architect of the Haçienda in Manchester wrote: “I insisted the club needed a flexible lighting system, as in a theatre. I wanted the whole space to be theatrical - not just the stage [just as Barthes said, Ed.] so if someone wanted to hang a half dozen dead sheep from a fly bar, they could.” Hence technology is also featured in the exhibition, with Regno Quattro Luci, disco light Astrodisco by Clay Paky (1982), the Astroraggi projector (1983), and Atlas (1987), a disco classic.

The sixties pass and we continue with New York in the 70s and 80s. These were years of emancipation for the LGBT world, when it was established that gay nights should have beautiful music: Ice Palace Fire Island, Paradise Garage Logo, Le Jardin. A room in the exhibition is devoted to listening to the various musical genres that pervaded club culture. In a sort of silent disco with various headphone stations, with a rectangular enclosure and mirrored environment, each relating the musical tale, from disco to techno and house. The exhibition is instructive, containing photos, information and relics. Disco and art came together at the Mudd Club (1978) and the Area in New York, which offered new opportunities to young emerging artists. Here Keith Haring and Jean-Michel Basquiat began their careers. The trend continued into the feeling for altered space, with Arata Isozaki becoming its spokesman. First known as a Metabolic architect, he broke with the movement at an early stage, feeling closer to the Japanese Dadaists, working with the current he had rejected, namely Kenzō Tange the Metabolist.

Drawing inspiration from the “cybernetic environment”, Isozaki created the New York Palladium. The exhibition displays his designs for the project, which contained a mural by Keith Haring. In the 80s there was The Saint, a gay nightclub, where a key component of the lighting effects was the Spitz Starfield Projector, reproducing the starry sky as seen from Earth. Synthesisers were basic disco equipment: the Minimoog synthesiser, the Roland TR-808 and TR-909. The same happened in Britain, endorsed by punk and Vivienne Westwood. As we have seen, Ben Kelly designed Haçienda (1982) as a cathedral of post-industrial rave, co-funded by New Order.

In the 2000s everything changed.  The development of clubs became more complex. Brands and festivals participated actively, and there were new architects who once again took to designing clubs. An example was OMA, headed by Rem Koolhaas, which designed the Ministry of Sound in London, as well as the one-night-only club for Miu Miu in Paris in 2015. Akoaki designed The Mothership, a mobile DJ booth. And speaking of mobility, Konstantin Grcic, organiser and designer of the exhibition with Matthias Singer, has developed a light and music installation that is perfect for dancing outdoors (it will probably be presented at the Salone del Mobile 2018). So what next? Clubs change: they blend with fashion, and the social networks brand evenings and not clubs. In Milan, when Plastic moved, the evenings remained, the place that contained them became irrelevant. The reasons for the change are complex. The Economist wrote in 2016 that gentrification is one key factor: rents are raised and the suburbs are populated by housing estates and not noisy, antisocial nightclubs. And then let's face it: in discos there’s beautiful music and they’re fantastic if you dance, marvellous if the cocktails are good, excellent if the lighting is scenic and studied, spectacular if the wardrobe attendant is polite and doesn’t charge you double for a coat, supercool if, as Barthes or cultural anthropologists say, we’re all actors. But when you can get to know someone just by putting a little heart on Tinder, then perhaps even clubs have lost the best they had to offer: love (or power love).

Sign up for our newsletter and get domus in your inbox
In questa galleria: Night Fever, opere installate, Vitra Design Museum 2018
01 / 12
Share
Pin it