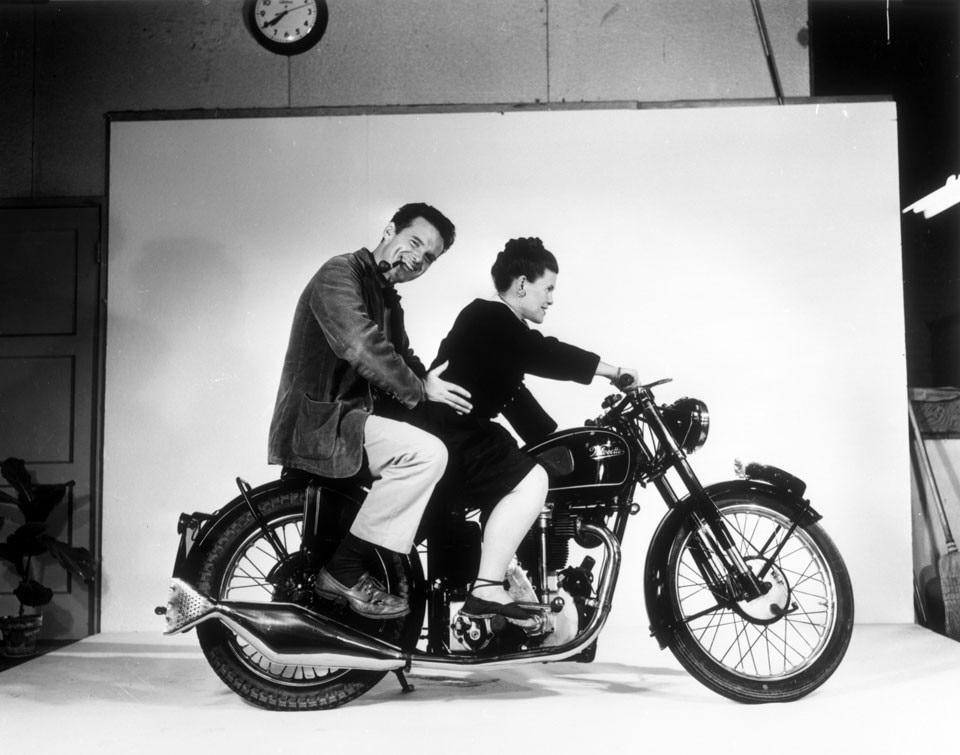 Through the creation of authentic design icons, their experimental attitude and a continuous attention in mediating between concept development and communication, Charles and Ray Eames have embodied at the same time the design of 20th century and a  certain independence —or an evolution at least— of the American scene from European dynamics and influences.
Charles Eames was born in Saint Louis, Missouri, in 1907; he grew up through a story of manual labor to help supporting his family during a phase of economic trouble: he could thus discover construction and architecture, which he could finally study at Washington University. With his first wife, Catherine Dewey Woermann, he took a trip to Europe, to later some first architectural works in the United States and to experience there a first cultural clash with the still dominant Beaux-Arts style. After a new trip to Mexico, fundamental in shaping his aesthetics and technical approach, Eames opened an office with Robert Walsh: some of their projects, including the Meyer House (1938) earned him the attention of Eliel Saarinen and a contract at Cranbrook Academy of Art (Michigan). There, he met a student, Bernice Kaiser, known by everyone as Ray. Kaiser, born in Sacramento, California, in 1912, was a promising artist with interests in design, a skilled painter who formerly studied at May Friend Bennet School in Hudson Valley (New York), lived the New York art scene of the 30s and founded the AAA-American Abstract Artists group.

The details are not the details. They make the design

Charles and Ray Eames got married in 1942 and then moved to California: there, he worked for a time in the scenery design for MGM, but soon they started experimentations —as Plyformed Wood Company — with curved plywood for prostheses and medical equipment, which granted them funds from the State, and an access to the most innovative means of production. In Post-war years, these experimentations evolved into a season of great achievements, where Eames created their most iconic pieces, destined to become icons of modern design: presented at MoMA in 1946 in the exhibition New furniture designed by Charles and Ray Eames, they were chosen by Herman Miller to be produced and put on market, thus starting a famous collaboration which is still continuing today. During the research phase before the exhibition, some prototypes were developed, built in plywood (curved with the Kazam! machine) and made of different separate pieces, a technique that was preferred to the single-piece system for reasons of maintenance and versatility: the DCW (Dining Chair Wood), LCW (Lounge Chair Wood) and LCM (Lounge Chair Metal) made their first appearance there.

The following steps were connected to the integration of new materials and techniques, specifically molded plastics or fiberglass, as for the single-piece chair with cross-shaped metal base (1948) or for La Chaise (1949), which got produced only after 1990. Metal, its possibility to be combined with other materials or in spatial structures, was another fundamental point in this research, as it shows in the combinations with wood for Eames Storage Units (1950) and LTR Low Table Rod Base, or in the plasticity of the metal mesh structuring the Bikini chairs (1953-56). After ten years of studies, in 1956 the final version of the was presented Lounge Chair and Ottoman was presented, an icon of design and a unique exception to Eames’ philosophy of “maximum quality at minimum price”, with its structure in rosewood and metal, and its leather upholstery.

Left: Feature of The Toy in Life magazine, July 16, 1951. Right: Ray Eames with an early prototype of The Toy in the patio of the Eames House, 1950. © Eames Office LLC

Left: Feature of The Toy in Life magazine, July 16, 1951. Right: Ray Eames with an early prototype of The Toy in the patio of the Eames House, 1950. © Eames Office LLC

Charles and Ray Eames would design architectures as well: the origins of their most famous realization, the Eames House (1945-49), are connected to their collaboration with Arts & Architecture magazine and its director John Entenza. In 1945 he launched the Case Study House Program, involving several great names form the architectural scene in the development of innovative housing prototypes in Santa Monica, California. The Case Study House #8, designed with Eero Saarinen, is the Eames House, and it extends to a building scale the principles of its designers and inhabitants: “aiming to obtain the maximum of volume through a minimum of materials”, the steel beams provided for the realization were organized in a neutral grid where glass and panels in different colors could then find a place upon a design by Ray Eames, as an “inevitable result of organic design” as she would later declare. The result is a combination of a residential volume and a studio that at the same time stand out as perfectly Modern and merge completely into  the surrounding nature.

The idea of design as conceived by Eames, included also the fields of education and communication. This was expressed in the realization of toys and games such as The House of Cards (1952), The Toy (1950), the Eames-styled Revell Toy House (1959, never got into production). It was shown also through exhibition design, where their didactic spirit took shape, as for the Mathematica exhibition (1961) or the several (about 50) collaborations with IBM for films, publications or exhibitions. Films in fact were one of the widest fields of production for this designers’ duo: between 1950 and 1978, Charles and Ray Eames realized more than 100 short movies — “attempts to communicate an idea” as they would define them — featuring different topics and duration: from The information Machine (1957) for IBM, extending the narration of A communication primer (1953) — an explanation of the functioning of computers which took IBM to start a long-lasting collaboration with Eames — up to Banana Leaf (1972) on the value of objects for different social classes, and the renowned Powers of Ten: A film dealing with the Relative Size of things in the universe and the effect of Adding Another Zero (1977), a scientific exploration of the relative measurements of things and the role of distance in observation.
Charles Eames died in 1978, and Ray Eames dedicated the following ten years, until her death, to the organization and communication of their long, wide and articulated production.

…every single thing depends on something else (Ray Eames)

Everything is connected —people, ideas, objects…— and the quality of connections is the secret of quality in itself. (Charles Eames)