The Baptism of Christ

The Baptism of the Lord, whose celebration closes the liturgical season of Christmas, is the protagonist of a wonderful portrayal painted by Piero della Francesca. Faithful to the Gospels, it is an example of the Sansepolcro artist’s refined construction of images. 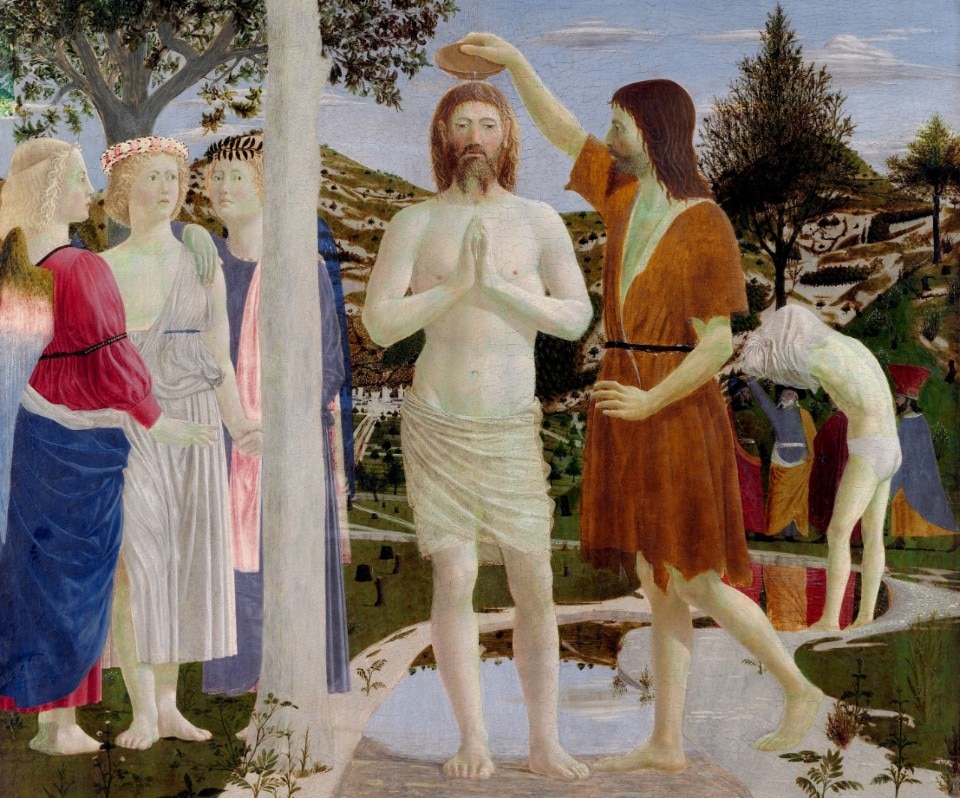 The liturgical season of Christmas ends with one last feast: the celebration of the Baptism of the Lord. After the solemnity of the Epiphany – the feast that commemorates the visit of the Magi to Bethlehem with gifts for the Christ Child – the church celebrates the Baptism of the Lord, narrated in the Gospel of Matthew (3:13-17), of Mark (1:9-11), and of Luke (3:21-22).

“Then Jesus came from Galilee to the Jordan to John, to be baptized by him. John would have prevented him, saying, ‘I need to be baptized by you, and do you come to me?’ But Jesus answered him, ‘Let it be so now, for thus it is fitting for us to fulfill all righteousness.’ Then he consented. And when Jesus was baptized, immediately he went up from the water, and behold, the heavens were opened to him, and he saw the Spirit of God descending like a dove and coming to rest on him; and behold, a voice from heaven said, ‘This is my beloved Son, with whom I am well pleased.’”

Piero della Francesca faithfully depicts the scene in the painting The Baptism of Christ. At the center of the painting is Christ, perfectly aligned with the dove, symbolizing the Holy Spirit, right above him.

Piero della Francesca paints Jesus by giving him the appearance of an ancient sculpture, perfect in his physicality and austere in his stance. On his right is St. John the Baptist wearing an almost tattered leather robe while on the left of the portrayal the artist inserts among figures, three angels witnessing the event. The one with a pink cloth on his shoulder, half-hidden by the tree – inserted as a symbol of life – has a fixed gaze toward the viewer thus creating a dialogue with the painting, in which the faithful, the viewer, participates in the scripture.

In the background, almost hidden, some Pharisees appear, and one of them, the oldest, points at the sky with his right arm toward the dove suspended above Christ. On the far right, just ahead in the perspective field of the Pharisees, a neophyte is undressing to be baptized in turn. A moment of realism in an intellectually conceived scene, where everything appears to be realized with extreme geometric mastery, where lines of force take the form of bodies.

In fact, the construction of the painting is based on geometric spaces and shapes: a semicircle, in the center of which appears the dove, whose wings extend along the diameter. On the vertical axis the dove, hand and cup of the Baptist are distributed.

The body of Christ plays a fundamental role. From his navel seem to coincide and meet diagonals that start from the extreme bottom sides of the panel emphasized by the leg of the Baptist.

Piero della Francesca was a deeply educated painter and a very fine intellectual, who liked to create the scenes of all his paintings according to precise geometric and proportional criteria.

He wrote a text between the 1460s and the 1480s: De corporibus regularibus.

“The human figure was like architecture for him, and his painted architectures breathe in space with the rhythm man breathes. This master of pictorial art and science, builder of men and women who all seem destined to command or reign, models of humanity, because of the intrepidity of their soul, the dignity of their stance, the beauty of their countenance, the majestic simplicity of their garments, this master, I say, informed Ferrara painting by his example”.