A city poised between calm and the tragedy of violence – this is how the Ukrainian capital was described in the early 20th century by the great writer Bulgakov, who was born in Kiev, and by the Ukrainian painter Bogomazov, who depicted the city in three very different paintings. 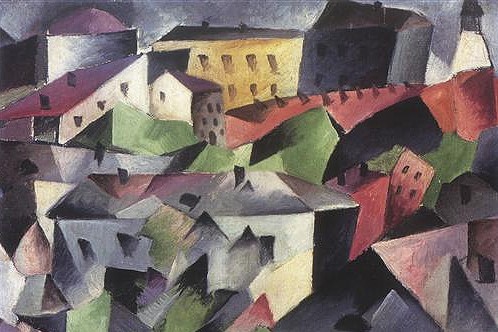 “In winter, more than in any other city in the world, quiet fell over the streets and alleyways of the two halves of the City – the Upper City on the hilltops and the Lower City spread along the curve of the frozen Dnieper – and the City’s mechanical roar retreated inside the stone buildings, grew muffled and sank to a low hum. All the City’s energy, stored up during a summer of sunshine and thunderstorms, was expended in light. From four o’clock in the afternoon light would start to burn in the windows of the houses, in the round electric globes, in the gas street-lamps, in the illuminated house-numbers and in the vast windows of electric power-stations, turning people’s thoughts towards the terrifying prospect of man’s electric-powered future, those great windows through which could be glimpsed the machines whose desperate, ceaselessly revolving wheels shook the earth to its very core. All night long the City shone, glittered and danced with light until morning, when the lights went out and the City cloaked itself once more in smoke and mist.”

So wrote in The White Guard Michail Afanas’evič Bulgakov, one of the greatest writers of the 20th century, who was born in Kiev on 15 May 1891 in a house, which became a museum, at 13 Andrijvskij Uviz. The tale of the convulsive winter at the turn of 1918-1919 takes us back to the Russian Civil War, describing a grieving city that perhaps is not so different from what it is today.

“There’s no more beautiful city in the world than Kiev”, he wrote in A Young Doctor’s Notebook when he had moved to Moscow, seven years earlier. What was Kiev like in the past? What was its role and how was it represented?

Oleksandr Bogomazov, in a clearly cubist painting entitled Cityscape. Kiev focuses, just like Bulgakov, on the concept of a city punctuated by houses – a dense, vibrant city, where the buildings take away space from the sky and nature, thus creating a living, inhabited, full centre.

Bogomazov, however, wants to delve deeper, into the most intimate life of Kiev, as if he were a scientist so scrupulous that he could even analyse it down to its molecules. He thus painted Sennoi Market, Kiev a year later, in 1914. The perspective is perfect. A neighbourhood market where children, women and men go about their daily lives. The goods on display dictate the lines of the work, starting with the fruit in the foreground and continuing straight on to the houses of the city.

Everything seems muffled, in complete silence, yet it should not be so – quite the contrary. The cubist style outlines severe, silent subjects dominated by calm.

Two years later, in 1916, he recounted Kiev is in a much more violent way.

A fire, a city devastated, annihilated. Buildings, people, and social life disappear as chaos sets in. The painting, Fire in Kiev, changes style. Futurist lines disrupt everything, displacing the feeling described so far. The effect is that of a wave, or a fire, enveloping a feeling-less, form-less city. Everything disappears and appears, only destruction remains. Was this an omen? The work was made on paper, an extremely intense monochrome painting.

A far-reaching city, where the domes of the churches have told its entire history. The Dnieper River divides it and accompanies it, sustains it even though it is wounded, and the painting reminds us of Kiev in all its splendour and all its past.