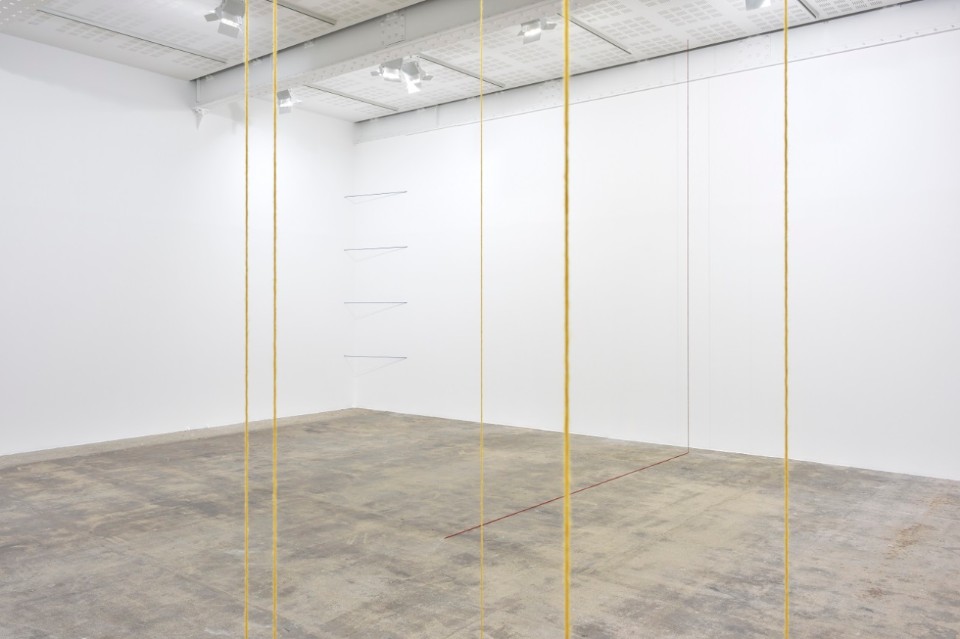 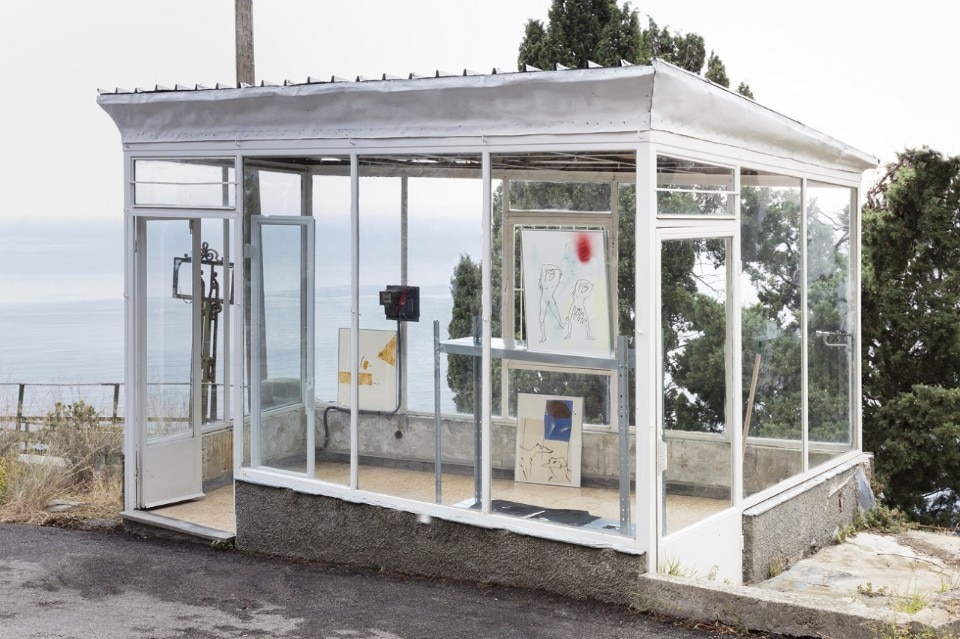 A floor-to-ceiling line may have been repeated four times, creating an open screen or wall-like plane within a room. Similarly, a pair of room-high rectangles, set at an angle to each other, each constructed of a baseline flush with the floor and two verticals, functioned as independent frames or portals. Though fixed in space, they seemed to shift dynamically as our sight lines change when we walk around them or pass through them.

Made of air and edges, Sandback’s palette of yarns (he has also used string, wire, and elastic cord) has varied over the years to include intense yellows, reds, oranges, pinks, purples, blues, and greens, as well as more muted tans, browns, grays, light blues or dark colours as Untitled (Sculptural Study, Twelve-Part Vertical Construction), c. 1982/2016.

In the past, Sandback experimented with fluorescent hues, and for a time in the 1980s used multi-colour yarns made up of painted banded increments, each several meters long. The first show in Marian Goodman’s Paris space echoes the two exhibits at the New York gallery in 1983 and 1985.

In Paris, within Le Fil d’Occam, as slightly rough-textured, Sandback’s material absorbs light as it intensifies and strengthens our perception of his supple, thin line. Particularly influenced by Minimalism, Sandback (1943–2003) sought to raise line to a new, pure level by working with acrylic yarn, creating multidirectional networks that map out materially fragile yet precise geometrical forms and volumes in space.

Fred  Sandback had his first exhibition in Paris in 1970. Le Consortium, Dijon, presented a show in 1984, followed by exhibitions in 1992 and 1998, respectively at the Lieu d’Art Contemporain (L.A.C.) in Sigean and Artconnexion, Lille.

In fact, Sandback’s three-dimensional works were never limited to a fixed site and they could actually be reinterpreted. As the American artist used to affirm his artifacts must be animated by another’s process and intention depending on themselves and no more on the artist. In the sake of this mindset, on the occasion of Le Fil d’Occam twelve sculptures were reinstalled in the gallery. Among them, Untitled (Sculptural Study, Mikado), c.1996-1997/2018, realized with white acrylic yarn, was installed in a bare brick interior basement, in the city's antique centre.

The line there had a certain glow, an aura of sorts; the fuzzy, hairy surround of the yarn’s constituent fibers functions almost the way bits of charcoal or pastel dust do to amplify the density of a linear trail.

Sandback’s sculptures are minimalist in concept and in image; they are also quite literally minimal in weight, mass and materiality, as Untitled (Sculptural Study, Twelve-Part Vertical Construction) 1982/2016, or Untitled (Sculptural Study, Four-part Wall Construction) 1999/2008 suggest. Moreover, parallel to the gallery exhibition,  a  selection of lithographs, etchings, screen prints, and  woodcuts were on view at the gallery bookshop, Librairie Marian Goodman, including  several drawings, witnessing preparation’s process and record’s realization.

They included, among the others, a plan for Untitled (Blue Line, 11 meters long, Konrad Fischer Gallery, Düsseldorf, 1969); a drawing from 1995 related to the series  of Broken  Line sculptures, or again, a drawing in black and white pencil on blue paper from 1985, recalling one of his Parisian exhibitions – as if Fred Sanback himself could have been turning back time just stretching yarns out, conveying an everlasting deliberate choice.