Torre Velasca and Palazzo dell’Arte, two fundamental locations for their architectural and design-related content, are hosting the American artist Nick Mauss, whose work is illuminated and viewable around the clock. 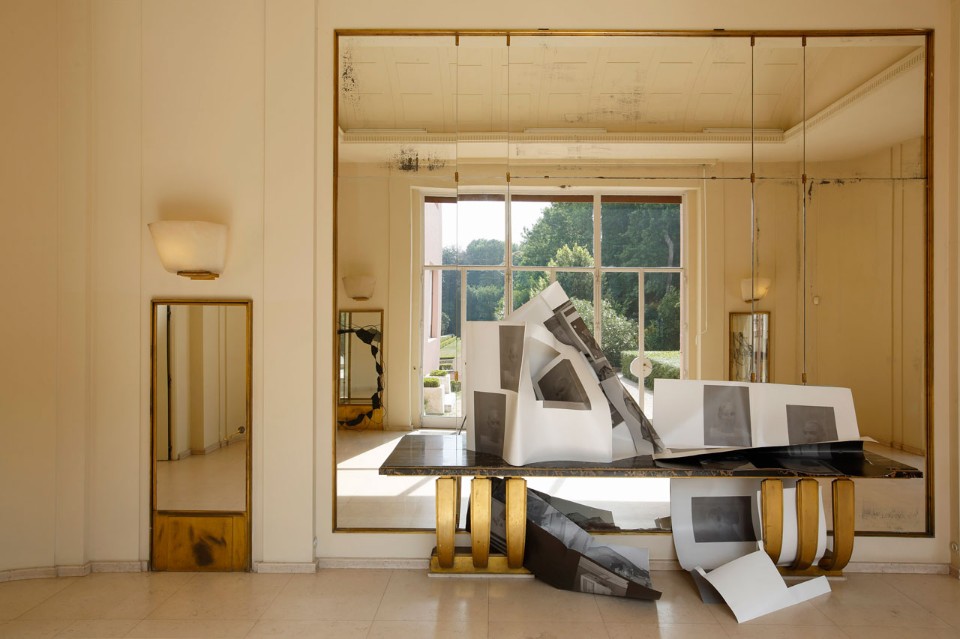 It’s a very particular alphabet of symbols that the American artist Nick Mauss (1980, New York) has been developing in recent years. His signs ask to be observed and patiently read, for their appearance never represents an experience of self-enclosed “pure seeing”, but more of an unravelling of coordinates defining a path through the artist's work, paved as it is with drawings, sculpture, performance and exhibition design. Mauss has approached the “Illuminated Window” project, his first solo show in Italy, in his habitual way by interlocking diverse elements in an active dialogue with the spatial and historical qualities of the locations where they are hosted.

The initiative was instigated in collaboration with Urban Up Unipol Project Cities and is sponsored by the Fiorucci Art Trust and Campoli Presti, the gallery that represents Mauss.

Curated by Milovan Farronato under the artistic direction of Edoardo Bonaspetti, the twofold exhibition is hosted in two Milanese buildings of architectural interest: the Palazzo dell’Arte, home to the Triennale di Milano and built by Giovanni Muzio in 1933; and Torre Velasca, an apartment tower designed by studio BBPR in the 1950s – an intriguing silhouette on the city’s skyline. At both locations, Mauss’s site-specific installations are directly visible to passers-by from the street. The Triennale's entrance is hung with a mural of dispersed and recomposed painted ceramic plaques. They communicate the compositional and fragmentary nature of the different media used to create a scheme of affiliations and disunions that is like choreography without dancers. “Choreography,” says Mauss, “is a way to organise and rearrange, to work with media in time, to find new forms and sequences, as well as to revive historical material in the present.”

The work is made up of layerings that are not only formal and visible, but also intangible. It incorporates a temporal dimension of multiple interrelations between bodies and gestures through a variety of narrations that continually emerge in the polychrome wallcovering at the Triennale as well as in the installation at the Spazio Acquario on the ground floor of Torre Velasca. While the art in the former is in line with its institutional setting, the art in the latter acquires a more public character of display.

The title “Illuminated Window” being a reference to an ideal perspective, a well-lit visual frame for the work on display, 24-hour lighting turns the space into a theatrical stage for around-the-clock viewing. Unlike the small ceramic surfaces exhibited at the Triennale, the Acquario contains two large paintings similar to backdrops for a hypothetical performance. Although in the past, Mauss's work has contemplated dancers and performance, here, there is the abstraction of signs. This is added to the presence of original office furniture designed by BBPR and the two paintings on mechanically moving scrolls like rotating advertising panels, which might allude to the passing of time: sequences of acts perennially beginning or ending.

Another element permeating Mauss’s entire production is the depositing of multiple signs that constitute his work. Sometimes they are traced with the tip of a pencil like sketches and consequently masked by colour. Sometimes they are displays of crumpled shapes (see the Torre Velasca). They express the difficulty in defining an idea still in gestation, the difficulty of a process that has not completely come to a conclusion.

“I’d propose the figure of speech where the normal word order is changed: the anastrophe,” says the curator Milovan Farronato, indicating a possible approach to the comprehension of the formal results. “The concept of sabotage is another attempt to give a preliminary definition to Nick Mauss’s work. The anastrophe is like an error that generates poetic effect. Whichever means Mauss decides to use, and there are quite a few, he always introduces the possibility of an unexpected event, an effect that was not contemplated that potentially invalidates the result of his work, or better, alters it. After all, coincidences always need guiding.”

In this precise gap between the artist's design that imposes a series of conditions and its ultimate result, open to error and imperfection, is where the vivacity of Mauss's visual language lies. In the constant exchange with the places hosting his work – according to which he has made the work – we find a heuristic procedure of constant organisation and modulation of shapes. This flows through the artist's poetry in its entirety, showing his awareness of the need to express an artistic language that embodies the present while finding intensity in the thousand fragments that make up its most convincing form.