Three years ago, Milan’s legendary Plastic nightclub opened a space dedicated to the contemporary arts. Named PlasMA, this new art venue creates a positively atypical exhibition context, with strictly nocturnal opening hours yet unperturbed by the relentless music of the club next door. Giovanni De Francesco has curated a special show that highlights the suspended nature of this place, and more besides. 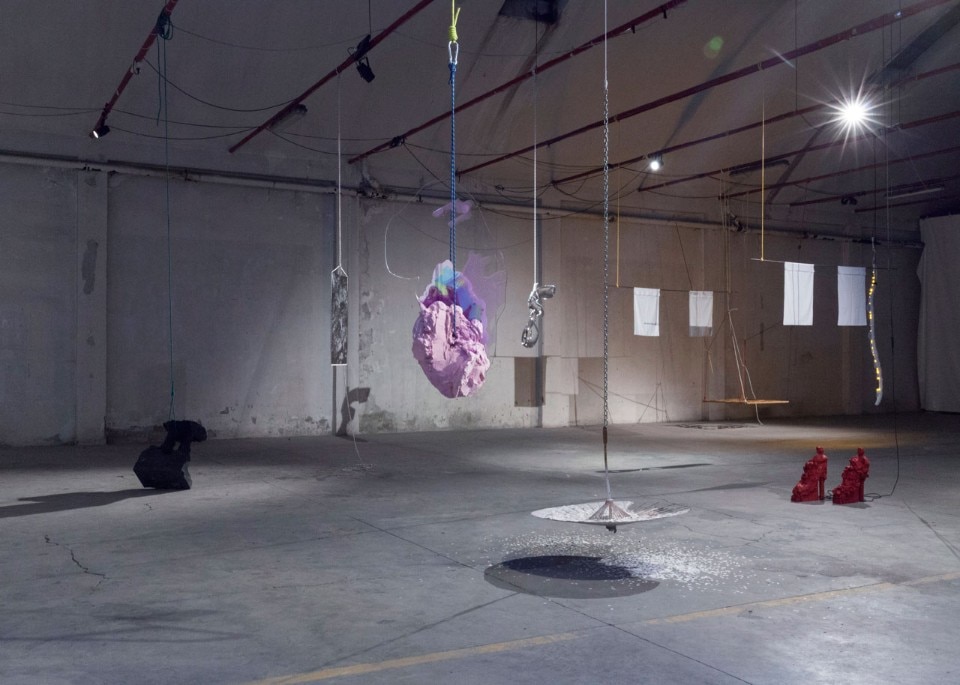 “Ah, Giovanni De Francesco! He’s a smart ‘guy’.” I’ve lost count of the times I’ve heard different people say this, all of them respected and recognised in Milan’s art, design and culture scene. The phrase came back to mind the other evening, as I was leaving “La Ballade des pendus” (literally “the ballad of the hanged”), a collective show where Giovanni is both curator and artist. It suddenly occurred to me how that catch-all title of “guy” revealed the difficulty of pinning down such an artist, whose thinking and practice I admire. The difficulty is understandable, since De Francesco is an inventor and activator of spaces. He is a set designer (shifting between design, fashion and theatre), as well as a multifaceted figure. He can’t be summed up hastily and he can’t be easily positioned. Perhaps this – and more besides – is why I sensed I could read an incisive and different discourse in his “Ballade”, concerning that interdisciplinary quality which many harp on about, but few are able to live by and translate into space in concrete form.

Giovanni De Francesco: Yes, I cross boundaries, like many others, or maybe a little more than others. And maybe it was in relation to this attitude that Nicola Guiducci – the legendary DJ of Milan’s Plastic nightclub – invited me to come up with an exhibition for PlasMA (Plastic Modern Art), an exhibition space next to the historical dance venue. I’ve been in Milan for 20 years, and I’ve enjoyed Guiducci’s rhythms on the dance floor many times, so I immediately accepted the invitation and extended it to other artists (and some other creative talents too). I liked the idea that in turn they’d accept a bit like one accepts an invitation to dance: if you want to, if you’ve got time, and if you like the company. The apparently light-hearted context and procedures were also challenging at the same time. The image of the Hanged Man – the 12th card in the Major Arcana of the Tarot deck – seemed to perfectly represent the nature of this hybrid and suspended space, which only comes to life at night and exhibits art under unusual conditions. To underline this aspect, I thought of a display design where all the pieces were hanging at different heights thanks to a system of cables anchored to the red beams spanning the interior of this ex-industrial space. Albeit symbolically violent, this device made it possible to harmonise a series of very heterogeneous works: 21, a number that overturns the 12 of the card at the centre of the project. In some cases I chose works whose shape or contents clearly stuck to the theme, and in other cases the artist proposed a tailor-made piece. The vase by Andrea Branzi sidesteps the concave shape and function of an ordinary vase by being a closed body, while its “hanging” gives it a Brancusi-style likeness. It’s the same with the pieces by the two young designers Duccio Maria Gambi and Massimo Faion, where research into the material upends the idea of functionality, which many assume to be at the centre of their discipline. A reference to night-time and the show’s inverted character can also be seen in the large photograph by Annalisa Sonzogni, which portrays a hall in Milan’s Brera art gallery during the hours of closure. Other works take a lighter approach to suspension, such as the aerial composition by David Casini or the almost invisible stone by Stefano Serusi. The work by Paolo Gonzato, meanwhile, suggests a fluctuation of the Pendus by scattering confetti on the ground from an upside-down umbrella, once again overturned.

Valentina Ciuffi: “And yet these works hang in the unpredictable winds of history, made out of abrupt mood changes and trends, and exist in a fluctuation of value judgements whose existence, deep down, they ignore.” I was struck by these words from Luca Scarlini’s fine text, which you used as a press release. Do things that are suspended, fluctuating and elusive also become awkward because they are difficult to judge or classify, because they don’t allow us to take sides in a way that suits the system?
Giovanni De Francesco: I’ve always been interested in picturing the relationship between an artwork and its life, its movements, and how it changes in time and space. While I was working on the project for the PlasMA show, I recalled the image of a statue in the Louvre which had to be put in a harness and suspended before it could be moved. That moment of transit caused a radical change in the vision of the work, and this is the intent of the exhibition I’ve curated. There’s a film documentary titled La Ville Louvre (“Louvre City”) that effectively tells this story. It stages rituals of art that are far removed from contemplation, revealing the routine of a museum’s behind-the-scenes activity. In that phase the artworks still have to be positioned, so they move around and come to life like actors who aren’t yet recognisable. The film happens to start during a night in which the dark halls are hand-lit with the scarce light of a torch. This is the Louvre, but what happens to a work when it goes from a gallery to a house? What piece of furniture or stand will it be placed on? Which unexpected furnishings will it develop a connection or dialogue with? There are infinite variables.

Valentina Ciuffi: The exhibited works are precariously hanging in that “just-before moment”, but on the other hand they are also a reaching-out of potential. The cables around them are like when we underline a word in a book: you transform and overwrite, but the aim is to highlight, not to confuse.
Giovanni De Francesco: However, the Hanged Man of the 12th card is also a traitor, right? Of the works on show, perhaps the one that best conveys the card’s controversial aspect is the piece by Luca Trevisani. First it was part of one of his videos, interwoven with living snakes, then it became a wall-mounted work, and here it has been suspended horizontally by a tangle of cables, so it casts its shadow on the floor. Trevisani himself has done lots of suspended works, but here he brought one of his few pieces that wasn’t conceived that way, and instead it ended up being hung. Then there’s Andrea Sala, who usually displays everything carefully in space according to precise proportions, but here his sculpture has been snatched from the walls to reveal its unfinished reverse side, and it hangs out of line. The installation by Alessandro Gori is also a traitor. He mixes the reproduction of one of his graphic images by creating a collage of materials that are a far cry from his customary language. And, why not, there’s my sculpture that plays on the materials’ ambiguity, betraying its appearance through finishings and colours. The title Puer Aeternus (a Jungian archetype) also refers to the puerile figure of an artist betrayed by his own passion. As Pier Paolo Pasolini wrote, “Grown up? Never – never, like existence itself which never matures – staying always green, from splendid day to splendid day.”

Valentina Ciuffi: Very beautiful words. On that note, I’d like to ask you one last thing. As a journalist, I read lots of unworthy and pointless press releases. Why don’t people think of using press releases more often as artistic content, as a written work? You did precisely this.
Giovanni De Francesco: If I had the nerve, I’d ask a poet if I could use one of her or his written pieces as a comment on my work. I haven’t gone that far. Often, though, I’ve asked  people to title my works when I’ve thought they’d do it better than me. As a result, one of the 21 hanging works is the text by Luca Scarlini. After a chat, he accepted my challenge to draft a short description of the exhibition without even being familiar with the works. I was sure that, once he had been informed of the theme, he’d be able to anticipate the works in his fervid imagination, starting with the perfect title that he found for them: “La Ballade des pendus”.