The book and exhibition “Chicagoisms”, curated by Alexander Eisenschmidt and Jonathan Mekinda at the Art Institute of Chicago, rest on the concept of seeing the city as an architectural workshop. 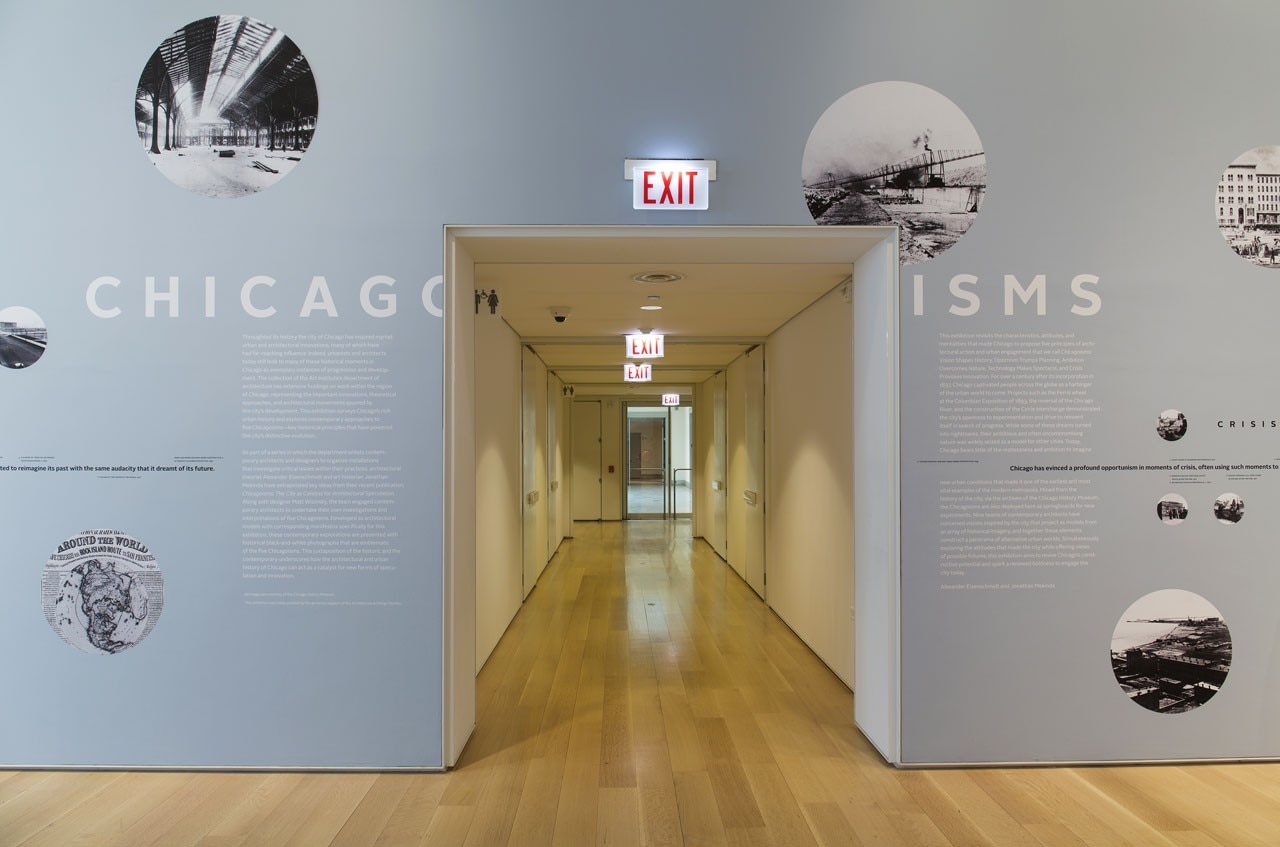 When introducing one of his “urban-planning narratives” on the 20th-century city, Bernardo Secchi pointed out that all modern urban-planning history has been played out between two extremes: the city’s thirst for continuous growth, on the one hand; and the fear of its permanent dissolution, on the other.
Architects and urban planners’ ambiguous interaction with this object, simultaneously one of desire and to be repelled, resurfaces in the “Chicagoisms” exhibition as a constant from which we may never truly be liberated. The city is seen as a field of experimentation, a place in which to advance the forms of association, of collectivity, of technological progress and how we capitalise on the constant state of crisis, physically represented by the object we call the modern city. These categories are totally ingrained in the language with which urban-planning rhetoric increasingly expresses its work, such that they apply universally to many of the metropolitan explosions seen at the turn of the 20th century, and Chicago certainly played a key role in their formulation.
From the 1893 White City prototype of the modern amusement park – accompanied by the due statements of technical progressivism and non-architecture symbolised in the Ferris Wheel – to Jane Addams’ social experiments at Hull House and their institutionalisation as a subject at the School of Sociology; and from the re-affirmation of the compact city via the “invention” of the skyscraper to its simultaneous and inevitable dissolution prompted by the potential offered by the grid for a rethinking of the relationship between fabric (constructed and social) and object. In each of these aspects, Chicago is presented as a harbinger of urban spatial solutions, an “incubator” in the words of Alexander Eisenschmidt and Jonathan Mekinda, authors of the book Chicagoisms. The City as Catalyst for Architectural Experimentation, which gave rise to the eponymous exhibition currently at the Art Institute of Chicago.

The book and exhibition rest on the concept of seeing the city as an architectural workshop. Eisenschmidt and Mekinda selected nine architectural firms (Sam Jacob Studio, Port A+U, Dogma, UrbanLab, Bureau Spectacular, Sean Lally/WEATHERS, MVRDV, WW and ORG-Organization for Permanent Modernity) and asked them to present their own “speculation” on the city of Chicago, to be presented only with one model, accompanied by a brief text. The workshop is, of course, the embodiment of a space where dissent is every bit as vital as is consensus: speculation and experimentation are not, in themselves, guarantors of a shared opinion on a consistent result. This inevitable dissent on understanding the city confirms the ambiguous relationship architects and urban planners have with it, as highlighted by Secchi and rediscovered both in Eisenschmidt and Mekinda’s book; similarly, the way the nine groups of architects responded to the invitation to present their own “speculation” on the city of Chicago which, perceived as a workshop or catalyst of architectural experimentation, stands as a universally valid example of the broader contemporary urban condition.

Eisenschmidt and Mekinda selected nine architectural firms and asked them to present their own “speculation” on the city of Chicago, to be presented only with one model, accompanied by a brief text.

The architects were offered five themes that would stimulate a juxtaposition of responses /proposals interpreting key aspects of the essence of Chicago: vision shapes history, crisis provokes innovation, optimism trumps planning, technology makes spectacle and ambition overcomes nature. Instead of exploring the suitability of the responses to their particular theme – as the proposals inevitably straddle themes and sometimes raise new ones – the proposals were considered as a whole and this is when the not inevitable rhetoric of dissent sought by the exhibition and implicit in the chosen themes becomes clear.

Taken as one, the responses from the architects produce what could not be farther from a unitary and shared proposal for the city, although they do reveal a heterogeneous feeling of nostalgia.

There is nostalgia for the great technological enterprises – which do not hide the society of spectacle – in the proposal for a new Roman aqueduct, intended as a city boundary, a place of civic significance, a living space and a means to preserve water, in the UrbanLab Great Lakes Aqueduct project. There is nostalgia for a non-simplistic approach to the grid; on the one hand, this echoes the times when no one hesitated to say that the architect creates objects (as reiterated by WW in their proposal to reconsider the urban block as an object); on the other, it contrasts the mathematics of the urban plan as an absolute fact with the architect’s persistent reaction, turning fact into invention in the Bureau Spectacular proposal. There is nostalgia for the city that has never been or rather that has been without realising it wanted to be:  that put forward by Ludwig Hilberseimer as a different relationship between work and living spaces, between “private” spaces and “public” spaces which degenerated into the “megalopolis is everywhere”, as discussed by Albert Pope in his written piece on the book. Dogma took the argument proposed by Eisenschmidt and Mekinda that “crisis provokes innovation” and considered the recession an opportunity to introduce discontinuity into the status quo.  This is how it interprets and re-proposes Hilberseimer’s idea for Marquette Park, without lapsing into the usual two-way rhetoric that counters “urban” with “suburban” and still seems to engulf ORG-Organization for Permanent Modernity’s proposal to acculturate suburban types by constructing an urban model with suburban rules.

At the extreme reached by the exhibition, nostalgia is expressed in speculation intended in its traditionally most heartless sense, i.e. building speculation. So, Port A+U create a dialogue between an almost resigned Mayor of Chicago and his “consultant” – a definition that cleverly conceals the architect. They decide that the answer to the recession lies in shifting Lake Shore Drive east to acquire new land for urban expansion – with total disregard for Mies’ apartments, which would thus be deprived of the Lake Michigan views from their absolute space. After all, as the exhibition says, Chicago has never failed to seize on the opportunities offered by a recession: why change now?

At the extreme reached by the exhibition, nostalgia is expressed in speculation intended in its traditionally most heartless sense, i.e. building speculation.

If the pig city, long the focus of MVRDV speculation, seeks the possibility in Chicago (the “hog butcher for the world”) to perhaps break free from its apparent irony and reclaim its scientific nature as a credible fact, the interpretation of how history is also part of a synthetic workshop process is entrusted to Sam Jacob Studio’s rereading of the Tribune Tower project, which recombines existing architecture. The grid, shown as a radical memory in the form of a continuous plane, a new Campus Martius shaped out of architectural Frankensteins surgically extracted from the skyscraper, promises new life to a city that has always acted without the weight of history on its shoulders.
© all rights reserved