At the end of the Earth

On Fogo Island, where Canadian territory meets the Atlantic Ocean, the Shorefast Foundation has enlisted contemporary art and architecture as instruments in the revitalisation of the local economy. The latest chapter in this ongoing effort is the inauguration of Fogo Island Inn, designed by Todd Saunders. 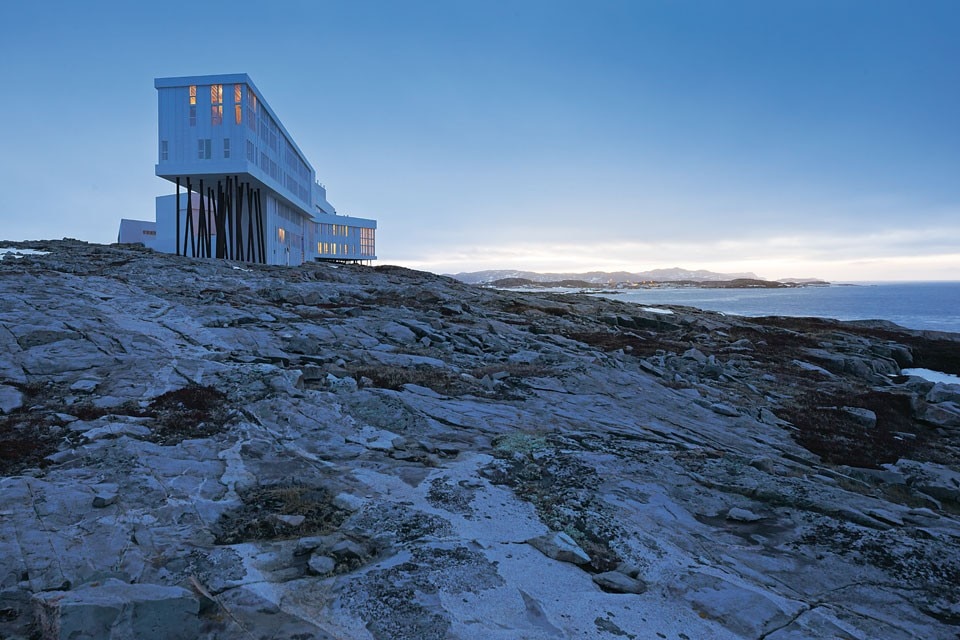 This article was originally published in Domus 968 / April 2013

Before there were roads in Newfoundland there was the ocean, and houses were built facing its dark waters and thunderous waves. People came and went by boat; the sea could provide even small outports with an economic livelihood and a connection to the rest of the world. Todd Saunders’s Fogo Island Inn acknowledges this tradition; each bed in its 29 guestrooms looks out towards the Atlantic Ocean. “You can’t have people travel thousands of kilometres just to make them turn around and look backwards,” Saunders explains. Beholding the ocean’s vast expanse from the comfort of their beds, the inn’s visitors witness first-hand the confrontation between the niceties of human culture and the inhospitable beauty of northern landscapes that lies at the heart of Saunders’s architecture.

A Canadian architect who founded his office in Bergen, Norway, in 1998, Saunders has been acclaimed for his projects that display strong yet simple forms as well as a sensitive use of materials. He is best known for the award-winning Aurland Lookout (see Domus no. 890). Elegantly clad in pinewood, the lookout’s viewing platform is projected far out above a steep fjord. Only a glass balustrade prevents the visitor from following its curving form as it plunges to anchor itself in the ground far below. Although it is a far more complex endeavour, the Fogo Island Inn shares the lookout’s capacity to function as an elegant yet precarious register of human presence in a wild landscape.

The client for the Fogo Island Inn is Zita Cobb’s Shorefast Foundation, an organisation that seeks to establish cultural production and geotourism as an economic motor for Fogo, Cobb’s native island, which was devastated by the closure of Newfoundland’s cod fishery in the 1992. Cobb returned to the island having made her fortune in the tech industry, and began looking for ways to set the island’s dwindling population on a more sustainable course. As part of this effort, Cobb commissioned Saunders’s earlier Fogo Island Studios (see Domus no. 938 and no. 950). The inn is meant to serve as a point of interaction where visitors from afar can participate in Shorefast’s local initiatives while contributing to Fogo’s economic revival.

Cobb, together with Saunders and a local fisherman, Peter Decker, chose the site for the inn on Fogo’s “Back Western Shore”, near the village of Joe Batt’s Arm, but not quite in it. The inn is placed as close to the shore as possible while respecting local regulations that require it to be at least 100 metres from the high-tide mark. From this vantage point it surveys the fishing grounds of the Labrador Current, whose rich waters first attracted European settlers to Fogo Island.

Four stories tall, the inn’s X-shaped plan is formed by the superposition of two elongated bars. On each floor, guestrooms are arranged along a single-loaded corridor so that each may face north, towards the ocean. The ground floor contains an art gallery showcasing the work of the visiting artists residing in the Fogo Island Studios and a restaurant serving locally sourced dishes. The second floor includes conference facilities, a gym and a cinema with a direct link to the archives of Canada’s National Film Board. A sauna designed by Rintala Eggertsson Architects occupies the roof above the third floor. Mechanical services are placed in a separate outbuilding.

Buildings in coastal Newfoundland traditionally sit upon wooden piles, which are either left exposed or else hidden behind the clapboard facades of “saltbox” houses. The province’s rocky ground and its turbulent coastal waters are so unyielding that buildings cannot sit upon the land; they must be tethered in this fashion, lest they be swept away. In Newfoundland, such an acceptance of precariousness is a prerequisite for permanence.

The Fogo Island Inn follows this same tradition. It bears upon steel columns that have been drilled into the bedrock. At the inn’s eastern end, the tall columns supporting the upper bar are angled, providing a visual reminder of the challenge of building in these conditions. In the building’s centre, the facade has been extended directly to the ground, its wooden boards cut precisely to within ten centimetres of the land.

Saunders first deployed such a detailed and conscientious connection between building and nature at his Hardanger Retreat in Kjepsø, Norway, where the terrace is painstakingly designed so as to integrate the existing trees. At the Fogo Island Inn, this barely perceptible joint between building and ground reveals the care the architects and builders have taken in positioning the inn upon its site.

As the building is approached, its appearance changes subtly, as strong form gives way to a tactile, material effect. From afar, the long, white bars are an abstract and self-contained form: a crisp, if somewhat unreal presence amid Fogo’s changing atmospheric conditions. As the visitor comes closer, the ghostly white shape becomes comprehensible as an aggregation of black spruce siding, milled on nearby Cottle’s Island. Relying upon the region’s skilled carpenters, Saunders and his team designed the facades using an inventive pattern of horizontal shiplap and vertical tongue-and-groove boards. This use of local building methods continues with the inn’s interior, which seeks to provide the warmth and hospitality of a Newfoundland living room for its jet-set visitors. Ineke Hans, Donna Wilson and other international artists have reworked traditional furnishings such as rocking chairs and knitted textiles, which are now being produced by local craftsmen. Together with Saunders’s architecture, they have produced beautiful objects that carry a heavy burden, navigating between the traditional rhythms of outport life and the hyper-connectedness of global tourism.

Seen from certain angles and in certain weather, the inn appears to be a lumbering ship, only temporarily at rest while waiting out a storm. Above all, it is a work of strong architecture, carefully attuned to its mission yet autonomous in its presence in this strange and wondrous place. It is an act of human culture that helps us to try and situate our own existence within a sublime landscape that defies comprehension. Peter Sealy (@psealy), architect, Ph.D. student at Harvard University