The exhibition that the Centre Pompidou devoted to Bernard Tschumi is a work of social theater that confirms his status as the most accomplished theoretical architect of his generation, able to produce architectural knowledge. 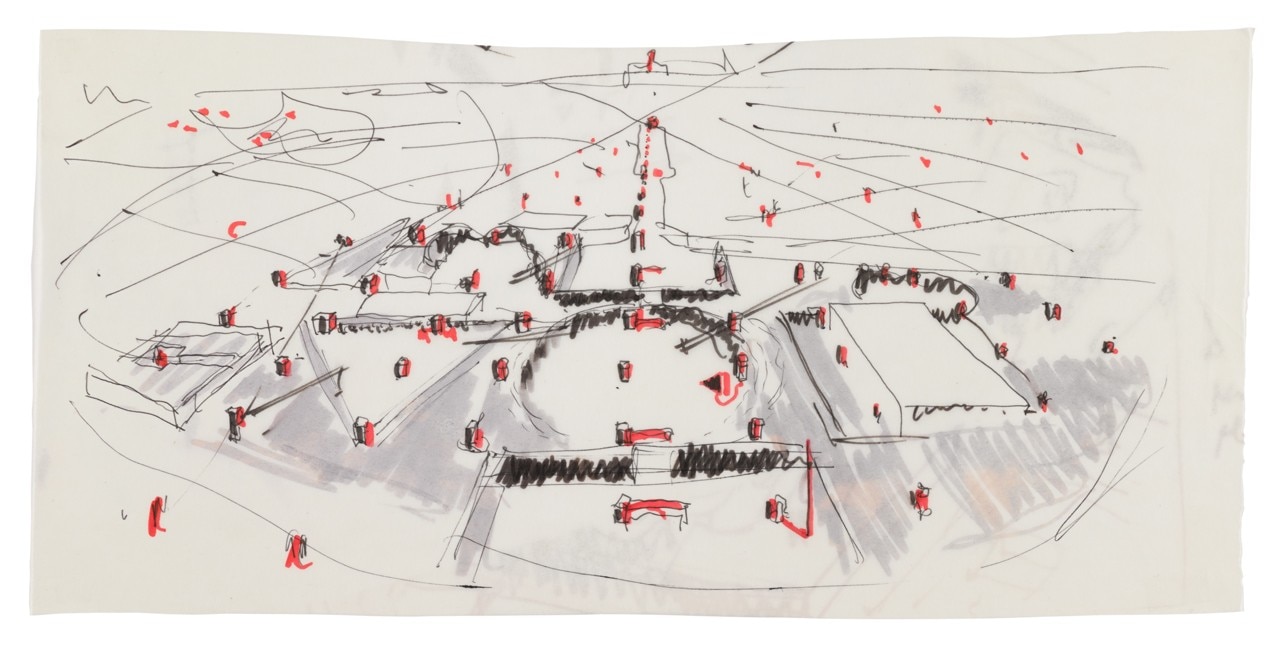 Share
I have but two responses to proffer in the wake of a visit to Tschumi’s retrospective at the Pompidou.
First, the exhibition was neither spectacular nor mesmerizing nor dramatic in any sense, notwithstanding its size. Nor, on the other hand did I find myself in a depot of stuff waiting on floor and walls to be shipped via camera to a catalogue, apathetic to its effect on the immediate presence of anyone.  Tschumi’s retrospective was precisely calculated as a work of social theater as it had to be.

Every exhibition in a museum is a form of social theater with a program and a plan.  Despite the efforts of curators to take control of an exhibition, it remains the most undisciplined and ephemeral form of social theater. People look at what or who they want, see what they want not what they should, ignore what they want, pay attention if they want, talk to each other whenever they want and given half a chance circulate anyway they want. Therefore it is the one form in which, given a chance, unscripted events, the sine qua non of Tschumi’s architecture theories, are most likely to occur in very short order.

Exhibitions are not architecture of course; their event spaces are too brief and level of awareness too narrow, though they are close relatives. That architecture is another form of social theater, however, is a conception implicit in Tschumi’s theories, and the incorrigible promiscuities that give rise to events are inherent in the very structure of architecture.

Calculated to be sure, just look at the non-linear layout, albeit to avoid delight or irritation, fascination or tedium, indeed to avoid simple feelings and emotions entirely. To achieve that aim, he joined the pseudo-objectivity of that peculiar gaze evoked by specimen cabinets to the conceptual density and layering and undulate atonality of a late serialist composition characterized by steely reserve.  A possible motive for that aim will prove fundamental to my second response: that with this exhibition Tschumi confirms to my mind at least his status as the most accomplished theoretical architect of his generation

For a service professional, the building in its first generation is the measure of architectural achievement. The status of the building for the theoretical architect is less clear, since for that genre of practice, the influence of architectural ideas is as important as the building. Thus all of the production: process, presentation, post production materials, construction documents, building, and all writings by the architect give rise to an indissoluble manifold, one that continues to evolve

In this formulation, publication is the principle vector and often the building or even the project does not turn out to be the most important product. Examples abound, but one need think no further than the Maison DOM-INO standard structure diagram, by far the single most influential work of theoretical architecture in the 20th century, though one whose various influences are all divorced from any relation to the original building project.  It is no surprise to find it as the first diagram on the first page of the first section of the Exhibited Projects chapter of the catalog:  “Manifestos: Space and Event.”

So why the most accomplished theorist?  First, Tschumi’s theoretical treatment of the event inaugurated the most important and longest lived topic in 20th century architectural theory bar none, including function, collage organizations, , psychogeography and detournement, context, formal relations, the linguistic model, each of which has now reached closure. Event theory continues to expand.  We have scratched the surface, more than scratched it, but we are far from seeing any waning interest.

And secondly, more than any other of his peer theorists, Tschumi made building an explicit component of his theoretical project with his declaration “architecture is the materialization of concepts.” And when visiting a Tschumi building, there is no question about it, the materialization of concepts is beyond doubt.  These concepts are by no means quotidian “solutions” to program and context. They are, rather sophisticated socio-architectural conjectures that inform every decision.  In that regard, one issue that the exhibition foregrounded was the shift from the early abstract-notational approach to building to the blunt tectonics that dominates the work by the late 90’s. I remember Tschumi referring to it as his move to a degree zero approach, a description that his disappeared from his writing but that I will use here for convenience. To be sure, it is a matter of some theoretical importance.

For a brief example, the Zenith concert hall in Rouen appears as a high-tech solution to a standard building type. This misdirection of expectation, the familiar rather than the exotic, is a fundamental attribute of the degree zero effect, as it moves the architecture from away from focused attention into mid-ground of attention, the architectural parallel of a soundtrack in film. Evidencing his loyalty to a critique of capitalist subjectivity, Tschumi does not permit the traditional celebration of individuality affected by a ceremonial entry. Rather, the toroidal form cues well in advance the pending collectivity to the gathering nameless, and they pierce into it through breach as particles into vacuum. Immediately, fascination with the structural framework between the two skins, exposed by the break, lures attention further away from the entry. There, in that interstitial space, the form becomes a vortex of circulation, modulating attention and physical proximity toward acondensation of an ad hoc collective. When they arrive inside, they see that all of the seats are uncolored and transparent, a last erasure of any trace of identity and a first step in the mutation of the close, critical attention of a political congress into the rapture of audience afloat in a sea of music. Truly brilliant, really.

Again and again, not just in Rouen, but in New York, Athens,  Le Fresnoy, Miami, Paris,  Cincinnati, wherever I have gone, the presence in architectural matter of such architects ideas cannot be mistaken.

More often than not, however, that presence has posed a serious problem for me. I understand the concepts and admire then, but they are so present, so adamant, I fear they come perilously close to rendering the building inert, to freezing rather than mobilizing any potential to encourage events.  As a theoretical architect there is no doubt that Bernard Tschumi has done his theoretical work in his buildings as an experimentalist with rigor and complete integrity. As far as I am concerned, the case for my judgment was already made some time ago, but I knew all of this before the exhibition.

As a colleague theorist, however, I wrestle with the issue; it matters to me. What is the problem? What minimum duration or circumstance is required for the likelihood of an enhanced event space to become manifest? What would its evidence be? Or perhaps, if as I have suggested, if the event effect depends on calculated misdirections of attention, much as a soundtrack does in a film, perhaps my expert relationship to the concepts negates my susceptibility to them. Tschumi does not address these questions though they have been raised and addressed to some extent by other theorists.

I have wondered if the issue might arise from his strict translation of  the concepts into materials; he leaves virtually no room for improvisation or serendipidity.  Another thought derives from Guattari’s and DeLeuze early writings on art’s effects in terms of percepts, concepts and affects, in the same passages where they raise the issue of event. Perhaps the defect, if indeed there is one, lies somehow in Tschumi’s commitment to concepts.  Rather than the G&T writings, I prefer the later ones of DeLeuze alone. At this point, he associates concepts with philosophy, percepts and affects with the arts and functives with the sciences and never the three shall meet. Which would mean that Tschumi has been working exclusively with percepts and affects regardless of the language he uses. While at the exhibition, the degree zero issue struck me as related to DeLeuze’s discussion of pure affect without feelings or emotions. In other words, I might have misunderstood Tschumi’s work for decades!

I had until then never considered the possibility that the event was a function of pure affect. I have been looking like an idiot for silly occurrences in the architecture, still under the sway of the naïve formulations like cross-programming, as if just the building should spontaneously give rise to slam dancing.  Now, after the exhibition, I believe that Tschumi’s work might be best understood as injecting doses of pure affect, non-standard sensational disturbances operating beneath intellection as its event mechanism, which would then operate as much over time as a sense memories as in the moment as behavior modifiers.

In any case, one thing became clear at the Pompidou. As a theoretical architect, Bernard Tschumi has laid the infrastructure for both theorization and experimentation with such rigor, clarity and courage that every result he produces counts as a contribution, positive and null, and generations of architects in the foreseeable future will continue to derive impetus, direction and purpose for their own inquiries and tendencies.  He does not produce epigones or precedents, he produces architectural knowledge.
–
© all rights reserved