A recent monograph on Ettore Sottsass is a multi-layered container, rich and complex like its protagonist who marked a profound and avant-garde turning point in twentieth-century design culture. 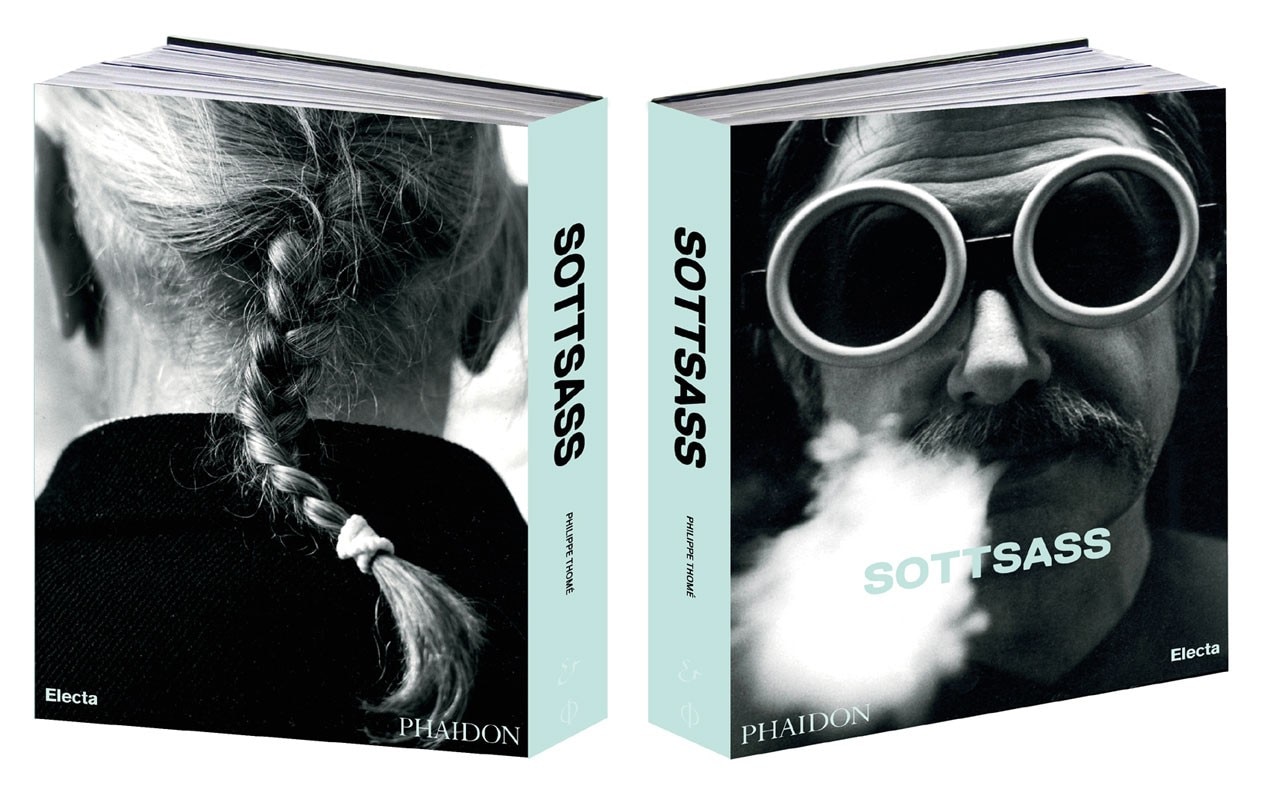 More than a book, a metaphorical box: the recent monograph on Ettore Sottsass is a container that opens up the indissoluble intertwining of work and life of a charismatic and unique character, precursor of different phases of his time: sometimes radical and against the tide, sometimes melancholic and ironic, a playful and proto-hippy intellectual but always intuitive and ante-litteram; coherent and perceptive but open to changing course in the various historic and existential periods he lived through in the twentieth century, from the years of the Great War to the Noughties.

From this box-book, no random metaphor for his collections – the design of Superbox comes to mind – emerges the articulated personality of Sottsass, amid sketches and architectural schemes, designs and paintings, postcards and writings. Then there are photographs, analysed in an interesting essay by Francesco Zanot: those that depict him, along with many personalities and intellectuals he knew and those – thousands of images – taken by him with an insight for fixing ideas or details – doors, windows, rocks, trees, walls – but above all with a desire to capture the essence of other worlds, different from western culture, from the Milanese cultural establishment in which he lived and worked: "I have never thought of making photographs like a photographer, I was horribly curious, this is all".
He came into contact with American pop culture well ahead of Italy as a result of an illness that kept him in hospital in Palo Alto in 1962. India, visited a year before with his wife Fernanda Pivano, opened a vast and primordial horizon about origins, that culminated in an explosive and mature way – in 1981 – in the Memphis movement. It lasted just a few years but was surprisingly innovative and visionary: liberated from the rigid dualism of form and function, the design of Memphis was founded on a new, revolutionary sensorial vision. Furniture became "enigmatic presences" kindly domestic robots, free from constrictions, bringers of colour, forms and symbols.
Sottsass was tirelessly and endlessly active – with that "indomitable creativity" that Fernanda Pivano spoke of – that encompassed architecture, design, art, painting, ceramics and writing. It is the work of an all-round intellectual who for the first time – despite other previous publications – is analysed as a whole, project by project, in a systematic fashion. Published by Phaidon in English and co-published in Italian by Electa, the volume is edited by Philippe Thomé: one of the first scholars of Sottsass, who stitches together with care and precision the entire chronological and professional course, subdivided in terms of historic thresholds and thematic categories to create a structured picture: biography, interior architecture, ceramic, installations, photography, industrial design, sculpture and painting, graphic design. It is above all though, a group work, where outstanding academics enrich and focus on specific aspects of Sottsass’s work and personality, that is assembled in a complex and multi-faceted collage.
In the opening essay dedicated to design, Francesca Picchi runs through the development of his work from the post-war period up to the exploits of Memphis following a train of thought that saw Sottsass engaged in projects considered highly diverse from each other – from architecture to painting, from writing to photography – connecting it all together within a powerful and imaginative vision but basically unitary and original. The consistency of his thinking is what led him to work for Olivetti, inventing a diverse and totally new designer-manufacturer relationship, and to come up with exceptional designs that accompanied the transformation of a universe dominated by mechanics towards a new "electronic" landscape: among these the first transistorised computer Elea, from 1959 and the Valentine typewriter, explosive in its fire-engine red colour.

The work for Olivetti runs alongside, without breaks or inconsistencies, the visionary search for a new language, described as "an assemblage of different fragments and references (...), based on the circulation of images and grafting of all kinds of figures, the fruit of his curiosity for every form of life, above all the most marginal: a language open to the free flow of any possible "bastard situation (as he happened to define his love of commingling)"

It was Memphis who demonstrated that design is communication and why – as George Sowden notes, interviewed in the essay – "designing a thing that communicates is very different from designing a thing that functions: it is also incredibly liberating". This movement, that Barbara Radice defined at the time of its first appearance "a melting pot of mutations" celebrates a new expressive freedom in which – according to Picchi – “highly diverse elements flow freely in an uninterrupted stream of assemblages always on the verge of collapse. It is the most lyrical, poetic account of a human condition that accepts its new position without stable, defined and absolute references and expresses all his love for chaos and its accidents”.

The essay by Deyan Sudjic analyses the work of Sottsass as an architect and develops around two phases quite distinct from one other: the work in the studio with his father (who died in 1953) in Turin, that included housing schemes, churches and schools, that took an organic approach close to Le Corbusier and mediterranean Modernism; a second more mature phase, following the experience of Memphis, that corresponds to the opening of the Milan studio Sottsass Associati: years of economic wellbeing for Italy that enabled the building of houses and villas "developing a richer architecture with exotic colours and materials (...) The houses resemble free assemblages of distinct elements (...) they seem to be small cities, with single buildings grouped around piazzas". Sottsass draws more on memory than tradition, where he finds "the basics of architecture: thresholds, entrances, shrines (...) that represent recurring themes in every culture”.
Sign up for our Newsletter and get domus in your inbox
01 / 12
Share
Pin it

Emily King meanwhile, explores those "systems of signs" that for Barbara Radice underpin all of Sottsass’s work. This research that can already be traced in the collections of images cropped and stored in boxes to «immortalise everything he sees» is the basis for an intense graphic and editorial activity, that spans from magazines (Room East 128 Chronicle, Pianeta Fresco or Terrazzo), to advertising campaigns for his designs for Olivetti.

In a beautiful article – written after the death of Sottsass in 2007 – Andrea Branzi argues that "the apparent happiness of his signs and the vitality of his design were the smiling response to the perception of human loneliness, a brief respite to the cosmic drama of existence”.

The book has a very rich and iconographic sources section, interspersed by wonderful little dossiers of sketches and drawings, books within books. The metaphorical box-book – graphic design by art director Julia Hasting – closes with a triptych cover, that wraps around the book, showing two iconic and amusing portraits of Sottsass: big round glasses, a puff of white smoke and on the back, his easy-going, anarchic, beat-generation plait of hair.