A normal dictionary allows us to understand a foreign language and the dictionary of Japanese spatiality enables us to translate the way space is organised in another culture. 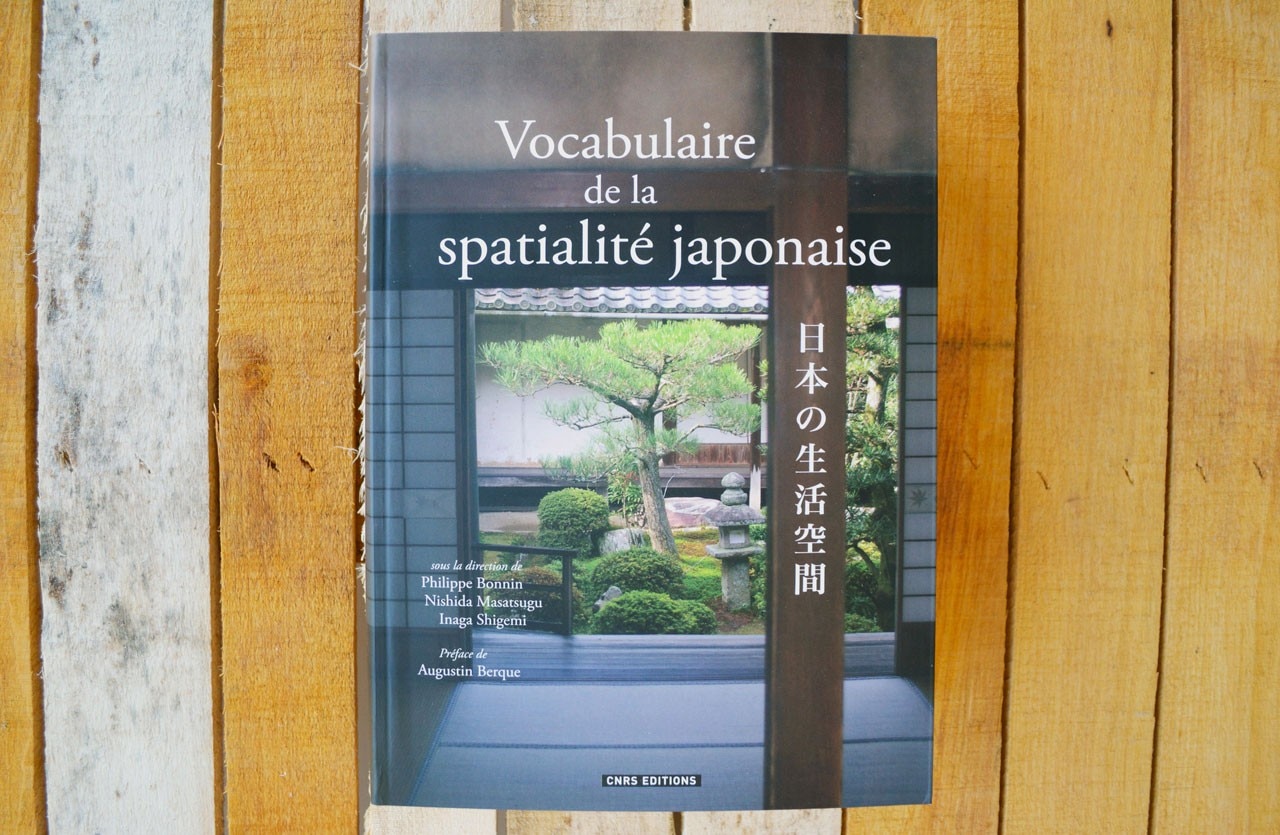 A far-reaching work with a future as a “manual” for all those interested in Japan or space in general, the Vocabulaire de la Spatialité Japonaise is the result of nearly 12 years’ work by a team of 64 professors and scholars, directed and coordinated by Philippe Bonnin, Masatsugu Nishida and Shigemi Inaga.

Foreigners are fascinated by Japan, finding it impossible to define clearly and univocally. It is a constantly evolving place-metaphor but equally retains age-old traditions, contradictions and opposites in harmonious co-existence and emanates a mysterious and bewitching energy. This is a country not grasped via the obvious where everything is constantly called into question, where Western coordinates find only a semblance of parallels and where everything is a surprise.
Philippe Bonnin – director of research at CNRS, Paris – explains how the Vocabulaire de la Spatialité Japonaise originated.

Salvator-John A. Liotta: In the preface, Augustin Berque asks why Japanese spatiality has so fascinated Westerners – with prints in the past and with architecture today – and he suggests that “Japan has explored paths that European modernity precluded”. Why a dictionary? What does it offer?

Philippe Bonnin: Dictionaries allow us to approach a foreign language and try to translate it; a dictionary of spatiality enables us to translate the way another culture organises space. This is not a dictionary of all the words in a language…we didn’t set out to produce something all-encompassing but something that is a work in progress. The Vocabulaire de la Spatialité Japonaise” contains approximately 200 Japanese terms that are comprehensively explained, starting from their etymology, and that clarify Japanese mechanisms, notions and spatial features. Just think, we already have at least another 100 entries almost ready and being worked on. It is already a mature work with approximately 600 pages but the Vocabulaire is open-ended and can be applied.

Salvator-John A. Liotta: What do you mean by “Space is a primitive language”?

Philippe Bonnin: There is a parallel between the way space is organised and the way we use a language. There is also a primitive aspect to the way we inhabit space, something we do even before learning to speak. This is a theme I have addressed throughout my entire research, embarked on with Paul-Henry Chombart de Lauwe, the forerunner of modern French urban sociology. We had a book in the library by Piaget and Inhelder, La Représentation de l’Espace chez l’Enfant” and, when I opened it, I realised that no one else had ever even leafed through it. That was my starting point, where they speak of how, step by step, the idea of space forms in the child’s mind: topological space, discovery by proximity and the subsequent steps. Simple ideas such as “This is inside and this is outside” that must be related to Freud. Indeed, before even starting to speak, a child has already experienced separation from its mother by throwing a bobbin (which represents its mother) and pulling it back by the thread, symbolically learning about separation from its mother and distance.

Edward T. Hall demonstrates that people and animals use space to signify something socially: he writes of public distance and intimate distance. He shows that Americans, the Japanese, Italians and others live differently. We see that Mediterranean space is sometimes closed but the people are open, whereas Japanese space is very open but there may be several invisible thresholds that shut it off from those who do not belong to the group.

We can say that the material organisation of informal space is already architecture: the position of a chair or a table in a room is already spatial creation. Vernacular architecture is not designed by architects but it also features the presence of recurrent forms that people know how to use and identify as their own. People are aware that their house expresses something.

Salvator-John A. Liotta: The Vocabulaire de la Spatialité Japonaise reveals the existence of what we might call a French-speaking school of studies on Japan.

Philippe Bonnin: While doing this work, I discovered a French-speaking school of studies on Japan that goes way back, to the work of Roland Barthes when he wrote the Empire of Signs, describing a country he had perhaps conjured up in his mind.

Certainly, the Japanese perception of space is not like the European one. The Japanese initially discouraged me, saying that it was hard to translate the way space is lived as if it were a language. That was when I told them: If there’s a problem, we shall attack it, we won’t back out.

This shaped my idea of an anthology of several works by French scholars specialised in Japan and by French-speaking Japanese colleagues. I tried to coordinate a number of studies and not simply highlight isolated episodes. The Americans and Italians are well educated and have fascinating views on Japan but in France we have grown together. I was clear that we needed to create a network but I am talking about more than 20 years ago when networks were not so common.

Augustin Berque’s work was important in this sense. When he published the book Vivre l’Espace au Japon, he managed to analyse Japanese space internally (his wife is Japanese) and it was partly thanks to him that two generations of scholars – anthropologists, architects, geographers, urban designers and philosophers – took an interest in Japan. Then, with JapArchi, a network of French-speaking architects specialised in Japan of which I am the director, we organised talks, published books and conducted research that would produce results.

Salvator-John A. Liotta: What is spatiality?

Philippe Bonnin: Spatiality – a concept that may seem remote to many readers – is actually our first language. It predates both the language experienced by the body and the mental language that we construct in relation to others and the world, in a constant exchange of spatial representations. Initially, this project didn’t deal with spatiality and we didn’t use this word. I called it “elements of space” but the Japanese told us that the French are too abstract and that we had to be concrete. So, we started speaking of notions but they insisted that this was wrong. Then, we started speaking of mechanisms and notions. Mechanisms derived from simple actions: sitting on a tatami instead of a chair determines your relationship with the room’s height; being able to put a table away in a cupboard for reasons of flexible room use etc.

Lecture after lecture, we defined notions and mechanisms and realised how we speak about space and how we create it, how we organise it and how we link it to different scales that range from an action to a whole area. There is a unity in all this that we can call spatiality. In the dictionary, we tried to clarify and define what this is: in Japan’s case, and because of its history and geography, it emerges quite clearly.

Salvator-John A. Liotta: What is Japanese spatiality?

Philippe Bonnin: Every society projects an internal portrait of itself outwards and it does so via cognitive and concrete means. The way space is produced is in itself an expression of language: it is what a society does to organise a discourse, the way it perceives and expresses itself. For instance, Japanese children don’t have their own bedroom from the time they are born; they sleep with their parents until they are five or six and families are said to sleep “like a river” (an expression drawn from the ideogram for the word kawa, river). The river ideogram presents three vertical parallel but fluid lines: father, mother and child. Sleeping together lends a social form to the concept of family: they grow together and create solidarity. Sleeping in the same bed produces both a space and bonds that differ radically from Western ones.

By incorporating the key principles of spatiality even before we start to speak, we lack a critical distance that allows us to highlight them. This is what I call a “Japanese detour”, a digression by otherness or a form of shamanism employed when you go and explore another culture. We are able to perceive exceptional things in the ordinary and everyday world of others but, most importantly, we eventually see – as if for the first time – our own way of living. The distance allows us to see.

It is via the creation of distance that we perceive the essential; we detach from the contingent moment and see what truly matters: the principles. Then, however, every culture creates or recognises its own peculiar ones and you need a dictionary to translate them.