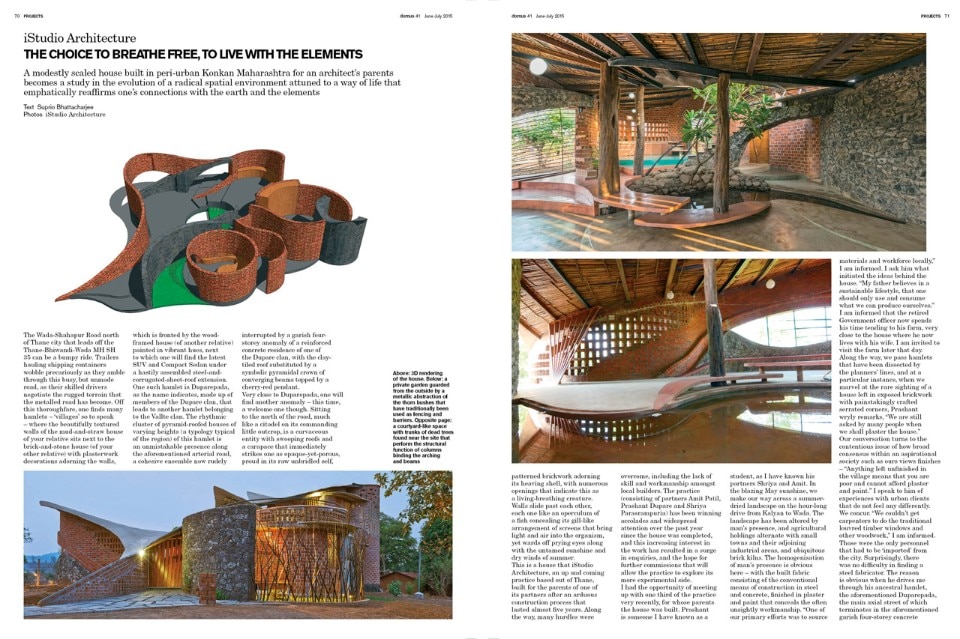 Share
The June-July issue of Domus India keenly talks about our relationship as a civilisation with nature; setting up a sustainable relationship with the natural environment, developing cultural conversations with the world around us, are indeed part of all of human history, then why is it today that we suddenly want to celebrate some efforts towards an amicable relationship between (hu)man and nature?

We look at mud architecture in an essay by Siddharth Menon – not to once more celebrate the “Indian-ness” or “localness” of mud and brick, but to understand it as a knowledge base – practices of making as well as a cultural institution such as building-making, (built-) environment-shaping. To talk of the variations and differences in mud architecture in different regions of India is precisely to see design as the arena of variety and sensitivity both together.

Simultaneously we also look at the intricacies of design in natural networks and structures of existence. We understand in detail the ecosystem of wetlands, with the case of Keshopur in Punjab in northern India. There is another form of culture and design of human life and built environment that we explore the history of Hindustani Sangeet (music) and the development of a public sphere in a growing metropolis like Mumbai through 19th and 20th centuries.

A cultural theorist (Tejaswini Niranjana), a practitioner of visual culture such as film – a film-maker (Surabhi Sharma), and an architect and urban researcher (Kaiwan Mehta) discuss this across forms of knowledge-practices. Besides, we also discuss the India Pavilion at the Hannover Messe in Germany, that internationally launches Prime Minister Narendra Modi’s “Make in India” initiatives as well as the idea of “Smart Cities”; India was the Official Partner Country at the world’s biggest industrial fair, and the pavilion was jointly inaugurated by the Prime Minister of India and the Chancellor of Germany, Angela Merkel.