Ramos Castellano Architects recount how you work in Mindelo, São Vicente island one of the ten of the African archipelago of Cabo Verde, considered the cultural capital of the state. 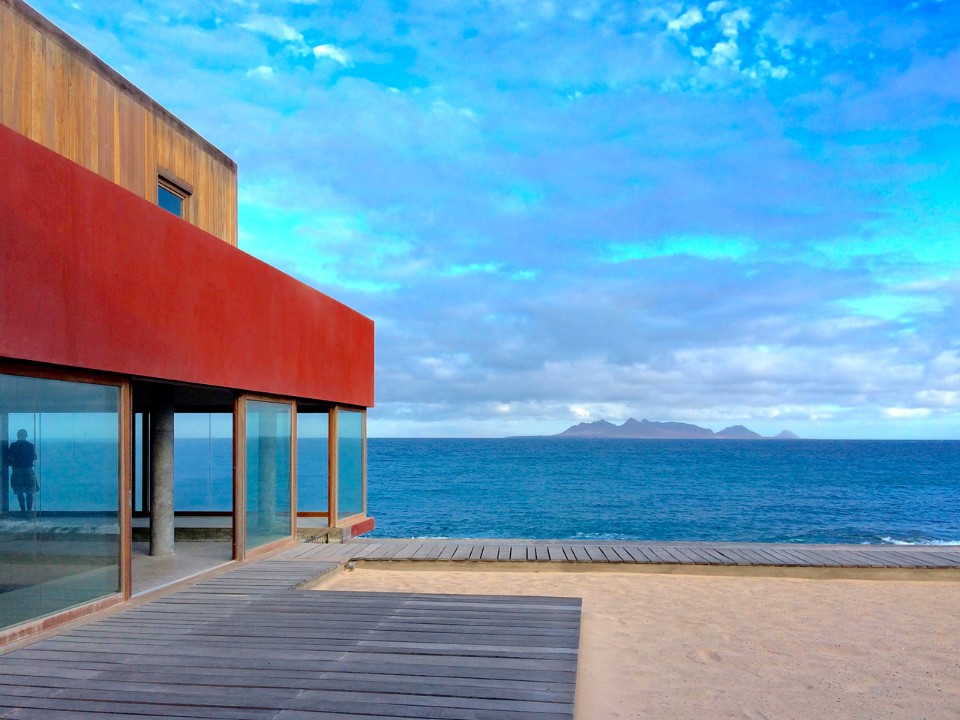 Share
Eloisa Ramos and Moreno Castellano decided to live in Mindelo, Cape Verde, and to open there their studio. They recount to Domusweb their life and work philosophy.

Paula Nascimento: Both of you come from Islands – Moreno from Sardinia and you Eloisa from São Vicente. Where and why you decided to return to Mindelo and open your studio here?

Eloisa Ramos, Moreno Castellano: We decided to return to Mindelo in 2004, but we didn’t start activities because we went back to Italy where we had a call to collaborate in an interesting project. At the same time with our practice in Sardinia we continued to work in renovations and housing projects. Just before the economic crisis Cabo Verde seemed to be a place where we could develop interesting projects.

Paula Nascimento: This seems a very improbable place, how different is working here from working anywhere else?

Ramos, Castellano: Usually, joking we say that after our experience here we can practice everywhere in the world, because of the difficulties that one faces: lack of materials, the famous no-stress rhythm which works against deadlines…

In order to build some of the projects here, we spent the days developing the solutions with local artisans, so we have to be involved 100% in every stage. From the materials to the details, everything must be simple because the builders with whom we work sometimes can’t even read. We explain the solutions clearly and try to somehow avoid many mistakes. At the same time, it is a very human process, we lean with the people, day by day; we feel their feelings.

Paula Nascimento: You mentioned the rhythm, which is the first thing one experiences here… time seems suspended here, not just because of the people but also the atmosphere. There is a calm vibrancy, if one can say that…

Ramos, Castellano: Our architecture became natural (and human), connected with everything that is pure and with things that matter in nature. Surely Mindelo is a vibrant and warm city. Also, very peculiar with this sensation of ‘suspended time’ as you said; people know how to have fun and to relax but sometimes it delays the work, so we have found ways to adapt – this is the social and human dimensions we put into our projects.

Paula Nascimento: I can understand this “human dimension” when one enters for example the apartments in Paz Apartments (2009) which seems to be your first experiment and then Aquiles Eco-Hotel (2014) where you start to consolidate an approach. Form and materials are in complete and organic relation.

Ramos, Castellano: The initial concept for each project was always to build a complete bioclimate, fully integrated approach from the structure and space frame to the furniture and décor, with as much handcrafted items as possible. By doing so, we distribute the money of the projects within the island and create an economy around local manufacturers. There are two different projects. In La Paz we were promoters, clients and designers. We literally built it ourselves using a small team of local workers; the whole process was like a workshop, an experimentation for us and was an important learning process. Aquiles Eco-Hotel: we are also the clients so we had a lot of space to experiment solutions and a lot of freedom in terms of architecture. There was ground to continue to experiment with materials, with the site – the hotel is built in the middle of São Pedro a traditional a fishermen village, an opportunity for us to use the traditional solutions in a new way. The whole process was more designing as if we were playing an instrument, searching for the right melody… the desire was to create harmony between the existing morphology, the climate, the existing buildings and the new construction.

Paula Nascimento: How do you deal with the scarcity of materials? There are almost no imported materials, you design, build and even make the furniture?

Ramos, Castellano: The scarcity of materials is an opportunity for us and to develop the creative side…  sometimes even finding a screw can become a problem, so the approach is a do it yourself.

Paula Nascimento: You make good use of recycling: oil barrels become doors or facade elements at the CNAD (Centro Nacional de Artesanato e Design), recycled wood to make furniture, as well as the burnt cement floors. How is this approach to architecture understood/enjoyed here?

Ramos, Castellano: For us architecture is a fundamental part of happiness… it is a matter of energy, of balance. And the response has been most of the times not indifferent; when we start the construction process normal people come to us and say things like: I am waiting to see what will come next.

Paula Nascimento: Yet you are making a museum – CNAD Centro Nacional de Artesanato e Design – that is a public building with an unusual facade. How were you approached?

Ramos, Castellano: The museum project was born out of a visionary dream. In an informal conversation with the director of the Centro Nacional de Artesanato e Design in Mindelo, he asked us if we had an idea for that space – an old colonial house with a patio and an old building on the rear. He challenged us and we answered him with the idea of a new iconic building, a museum. From then on, it was his energy and our vision and the commitment from both sides. The project can bring many benefits for all the local actors, on several levels: the country, the city, the locals of Mindelo, and so on… so we are using this argument to bring forward the project.

Paula Nascimento: What is the conceptual approach and how this vision is being constructed?

Ramos, Castellano: The site comprises an old house that played an important role in the history of Mindelo. Besides this building, there is an open-air patio in the backyard and a second building. We were asked to deal with the patio and with the building on the back, establishing a connection with the old house.

Cabo Verde is an archipelago of 10 islands in the middle of the Atlantic Ocean. Almost every product came from abroad in containers, barrels… from oil to clothing, to food and people emigrants. Thus the barrels are used for everything, as containers and as materials with many uses.

Our approach was to knock down the walls and open the patio to the city and to use those barrels and create a detached skin that covers the entire museum, paying homage to this simple object that is so entrenched into the lives of people of Mindelo.

Like in the other projects, the purpose was to work with the less resources as possible and work with the artisans of the centre in a self-build using recycled materials workshop. Funny enough, the budget has grown now but we kept the concept. The idea is to really bring to the centre of the city and pay homage to a material used in the periphery. More than that, it also has a specific function and performs as shading.

Paula Nascimento: You want people to slow down when they enter the spaces you design or stay at the hotels?

Ramos, Castellano: Yes, it is one of our goals… it is about life and understanding the vital things in life.

The sensations that each project or each space transmits depends on the project. For example for the hotels we have made, most of the time we like to design spaces that allow people escape the infinite loop of the western life and allows them to connect with themselves and with other realities and lifestyles.